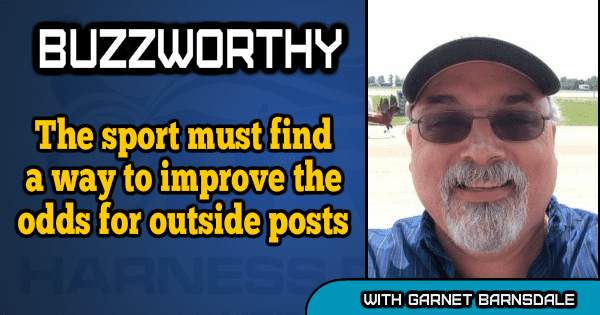 Buzzworthy: Social media abuzz about how to improve odds of outside posts

There’s been some chatter on social media this week from bettors discussing the scarcity of winners from outside posts at just about every track in North America, which got me thinking about it and some of the suggestions being posted by customers.

The bottom line, for multiple reasons, winners from outer posts are close to extinct these days and it isn’t only on half-mile tracks where it is expected, considering that the outermost horses find the first turn come up very fast.

Consider though: At Woodbine this year so far (as of March 23), Post 10 has accounted for a microscopic win percentage of 1.7 per cent in 115 races that have had 10 starters. The two winners have come in pacing races. Trotters starting from post 10 have put a goose egg in the win column in 41 tries.

In a business that more than ever needs to worry about finding ways to increase wagering, the reality of one of the participants in every race having little-to-no-chance of winning is a problem that needs to have more than just bettors talking about.

So, what’s the answer? A staggered starting gate? Recent post position stats from two 5/8ths mile tracks that have them, The Meadows and Harrah’s Philadelphia, would suggest the answer could be no, or, maybe.

At The Meadows – as of March 18 – the outermost post 9 has produced just two winners in 112 starts for a 1.8 per cent win average. Bettors at The Meadows can toss the 9 horse with great confidence in virtually every race. At Harrah’s Philly, however, Post 8, which is the far outside, had 96 winners leave from there in 1,376 races during the 2017 racing season for a markedly better win percentage of 7 per cent.

So, are trailers the answer then? Not if you look at the stats from Harrah’s Philly where the trailer fared worse than the outer post, most likely because on a staggered gate, the rail horse is already behind horses to his outside when the race starts, which is bad news for the following 9 horse. Horses leaving from post 9 last year at Harrah’s Philly found the wire first in only 2.6 per cent of starts.

Some of the comments in response to Andersen’s questions in the Facebook thread:

• Randy McCown: “Even 5 on gate, 3 trailers would make for better racing on half”
• Thomas Pettersson: “At Charlottenlund Racetrack in Copenhagen (5/8-miles) they always have 6 horses behind the gate and 1-4 trailers over the mile distance races.”
• Bruce Lundstrom: “Unless your horse can leave a 100, the 8 and 9 hole is a wasted week.”
• George Ella: “Some use the outside as a training mile and wait; they only have a few great miles a month, so use wisely others love the outside and do well its call condition your horse.”

Obviously, there is no easy answer to making the outer posts more competitive, but it’s a problem that is brought up regularly by bettors that demands a solution, or at the very least, an improvement.