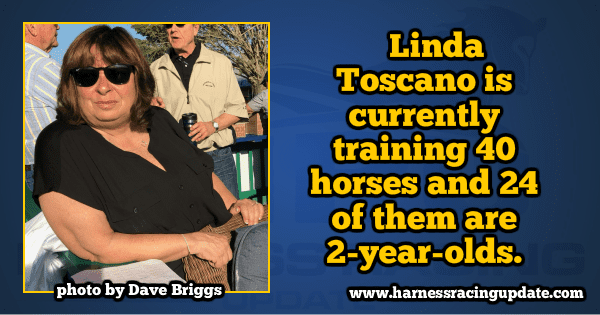 Tough winter for Toscano at Pinehurst

Trainer said the weather has been terrible in North Carolina this winter, but her horses seem to be fine with it.

“It’s been a horrible winter, just awful. It’s like the north has shifted south this year,” she said last weekend while visiting Sunshine Meadows Training Center in Delray Beach, FL on the eve of the Hambletonian Society’s winter meetings (Toscano is a Hambletonian Society director). “Honestly, we haven’t got a whole lot better than what they had up in Jersey this year. It’s been about 10 degrees, at the very most, warmer (in Pinehurst) and we had every Nor-easter that hit New York and then we had cold rain.”

Told she might have to try training in Florida next winter, Toscano said, “that’s what everybody says, but right now, it’s much more conducive to me having an operation that’s a little more to the north… I think the horses like Pinehurst, like the weather… It’s a great racetrack (at Pinehurst) and I think horses like the frost.”

Toscano said she is currently training 40 horses and 24 of them are 2-year-olds.

“There’s probably a hair more trotters right now than pacers. It’s funny how it works. When I started, it was only pacing fillies. Then, all of a sudden, it was pacing colts. Then, those two trotters came up and now everyone thinks that I can train a trotter,” she said, laughing. “I think it’s patience.”

Toscano said though it was hard to find offspring of her champion Chapter Seven, she does have four Chapter Seven fillies and one homebred colt owned by Chapter Seven’s part-owner Richard Gutnick.

As far as first-crop sires go, Toscano said she has a couple of Father Patricks and a couple Trixtons who, “are all okay right now and then the pacers are kind of a mixed breed. I like my New York sires, so I’ve got American Ideals and I have a Heston Blue Chip, who acts like he could be okay. Also, a So Surreal. I’m across the board. It’s too early to tell whether there’s anything special in the group.

“At this point it’s so much easier to tell you the ones I don’t like than the ones that I do like… My two worst colts last year when I shipped north were Casual Cool and Rockapelo and one wound up with a record of :51-and-change and the other made almost $200,000 or $180,000, so I’ve given up on (predictions). When they get closer, I think it’s easier to tell.”

Toscano said she’s looking forward to training some from the first crop of her champion trainee Walner, who is standing his first year at stud this winter. His first crop of babies will be sold in 2020 and begin racing in 2021.

“I’m really excited. I think there’s an awful lot of them that are going to be ‘Wow, that’s really something.’ He’s got a great book of mares, just from what people have called me and told me. He’s certainly going to get a chance, so I’m hoping he can do what he did on the racetrack in his next career because he was a very, very special horse,” Toscano said.