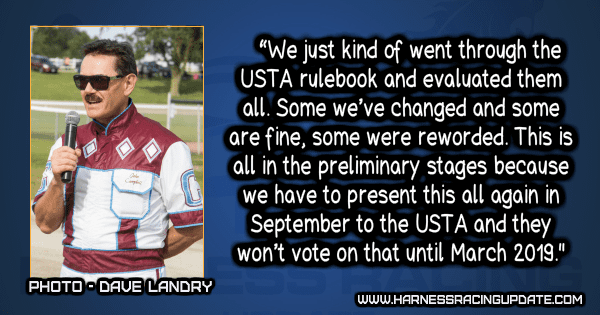 Slow and steady wins the race for universal rules

Hambletonian Society CEO John Campbell is doggedly determined to create as many universal racing rules throughout North American as possible to enhance the sport for bettors and participants.

John Campbell said his quest to develop universal racing rules across North America is a slow process, but one well worth the effort.

“We had a meeting of my committee in January in New Jersey and I think everybody there would agree that it was very productive,” said Campbell, the president and CEO of the Hambletonian Society. “We covered a lot of ground and, basically, that’s gone back to the USTA to get the wording and intent all put together,” Campbell said.

“We just kind of went through the USTA rulebook and evaluated them all. Some we’ve changed and some are fine, some were reworded. This is all in the preliminary stages because we have to present this all again in September to the USTA and they won’t vote on that until March 2019.

“We did give them a limited number that we discussed and agreed upon this year and they are going to vote on those in the March meeting coming up. Obviously, I’m optimistic that they will get passed. We think there’s value in everything that we’ve brought to the rule committee.”

Campbell said his focus is on racing rules, not ones dealing with medication or putting a horse on a list.

“A lot of it is rewording or bringing back into focus rules that are already there, but have been ignored to a certain extent.”

He said it is critical for the sport’s future that the rules be the same or very similar from jurisdiction to jurisdiction.

He said the hope is to get his short-list of rules passed this year at the USTA and then come back next year with a complete block of rules which, once passed, can then be taken to Racing Commissioners International (RCI) to try to get as many different commissions to adopt them.

“I’m not unrealistic. I know we won’t get everyone to adopt them right away, but if we can get a block of them to adopt them and then work on the other commissions to come around in the future and build around that, I think that’s the most realistic approach that I can have,” Campbell said.

He has also been working with Standardbred Canada on developing universal rules across Canada, an initiative that has the support of Jean Major, the CEO of the Alcohol and Gaming Commission of Ontario (AGCO).

“I think there’s a lot of merit to it,” Major said. “Having tried it on the casino gaming side and, years and years ago, having tried it through RCI, it’s quite a task. It’s quite daunting. It’s probably easier to be done within Canada than it is in North America. We have a lot more flexibility in terms of changing our rules and much more quickly. In the States, I don’t know if it’s changed because I haven’t looked at it in a while, but they have to go through a legislative process and they are fairly rigid in the rule-making process.

“Conceptually, I’m in favor of it. Even if it’s not 100 per cent, but if you move towards common rules on 80 per cent of racing activity, I think that’s a significant improvement. We have folks working with Standardbred Canada and with our counterparts across Canada to do just that.”

Campbell said it’s all about creating a better experience for bettors and participants.

“We’re hoping that when (universal rules) get done they will mirror up rather well so that any difference in the wording will not make a difference to how the race is called and the bettor or participant can’t really tell the difference,” Campbell said.

An education in Paris

As part of his on-going education since retiring as a driver last July, Campbell made his first trip to the Prix d’Amerique in Paris in January.

“It was certainly impressive to see how they present the whole Prix D’Amerique card. One thing that we have to realize is that harness racing is a major sport in France and they don’t have the competition with the other major leagues that we do here in this country,” Campbell said.

“It’s a heightened sense of an event for the whole country. On track, they had 38,000 people there. You can imagine what an event it is. Then, when you factor in how their training centers are set up, I don’t think there is anything anywhere near that anywhere else in the world – a training center set up that well for horses to be exercised and live. It’s really impressive, the French approach to harness racing. It’s really very impressive.”

Asked whether seeing such a large, enthusiastic crowd for harness racing reminded him of harness racing’s glory days in North America, Campbell said, “It certainly makes you envious, not only for what they’ve got going on there, but for what we had at one time in certain venues. The reality is that we don’t now. I think if we would have paid attention to our product years and years ago when we were the only gambling game in town, I think our business would be in far better shape than it is now, but that didn’t happen and now we have to live with that reality.”

Campbell said in France there is no post time drag.

“They put up post times for the next race, as soon as a race is official, and there’s a countdown clock right in front of the grandstand and also for the drivers to watch in the infield when they are parading and that’s when they go,” Campbell said. “I understand with the drag (in North America) that it’s become a culture and it’s not going to change. The racetrack operators know if they go back to when the post time really is and it’s a hard line, it’s going to cost them a lot of money. Nobody is willing to give that up at this point.

“I understand the drag for financial considerations, but my issue is… why not get that next race out as quickly as you can after a race goes official so you’re eliminating the time in between races, even if you have the same amount of drag?”

Campbell said it was “a rude awakening” when he stopped driving and sat through an entire race card with his wife, Paula.

“I lasted four races and then I started complaining,” Campbell said. “She started laughing at me. She said, ‘You lasted four, I’ve watched 40,000.’”

He said he’s really enjoying his role with the Hambletonian Society, still has a lot to learn and is thankful for the help and expertise of Hambletonian Society veterans Tom Charters and Moira Fanning. Still there are days he misses the action of being on the track.

“There’s no question, I do miss that, but I’ve never missed it since the weather got cold,” he said, laughing. “When the weather was good, like the Saturday before Futurity Day at Lexington, I missed it terribly, but Sunday (when there was a downpour) I didn’t miss it at all.”