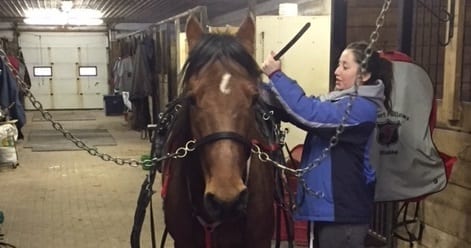 Thanks to owner Lou Sorella, Bad Bad Diva will race again in Ontario after escaping a barn fire in Delaware that claimed five standardbreds.

When Bad Bad Diva stepped onto the track at Flamboro Downs to qualify last Thursday morning, driver J Bradley Harris knew the filly had already won the most important race of her life.

August 7, 2017, she and stablemate Mi Six were the two survivors of a terrifying barn fire in Seaford, DE. Trainer Brittany Bounds lost five standardbreds in the blaze, which also injured a fire fighter and left behind $750,000 in damage. The equine casualties were My Little Tater Tot, Gangster Granny, In Front Charlie, Ezekiel Kandu and Standtuecemewin.

“My understanding is their stalls were all opened, but only those two left the stalls and ran out of the barn to a field where Brittany Bounds found both,” said Lou Sorella, who purchased Bad Bad Diva after the ordeal. Neither horse was physically hurt.

Ontario-based Sorella said he encountered a few brief reports of the fire, and was saddened when a Go Fund Me campaign for trainer Bounds failed to go over four figures. “The decision to purchase was simple,” he said. Business partner Katie Gene Miller, girlfriend of trainer Robert Fellows, had spotted Bad Bad Diva after she and Sorella had sold their previous co-owned horse, Mystical Wonder. “All I said was, ‘Get the owners’ information and the money will be on their doorstep in less than 24 hours,’ which it was.”

Although realizing, in retrospect, that replays had added 200 pounds or more to the petite pacer’s appearance, Sorella told HRU he was very pleased with her Flamboro qualifier. Sentiment and logic combined in the decision to buy her: Miller and Fellows had agreed that Bad Bad Diva showed promise, and Sorella recalled that Fellows had enjoyed success with another tiny mare, Dixie Lullaby.

“I was convinced this was the horse to continue our partnership because Diva was given a second chance, and it’s like she’s racing for those who were lost, from her barn,” Sorella said.

It took nearly three weeks of cross-border paperwork, followed by a sub-24-hour voyage with Doyle Transport, to get her to her new home.

Sorella owns one other racehorse, trotter Deuce Deuce Deuce, currently campaigning at Woodbine. HRU readers may also be familiar with his public handicapping for The Raceway at Western Fair, and his fundraising for breast cancer awareness under the “Team to the Moon” banner. His wife, Maria, fought and beat the illness a few years ago. A grateful Lou founded Team to the Moon. “It consists of trainers, drivers and horses all coming together to help spread the word… They put up one per cent of the horse’s, trainer’s or driver’s earnings up until September 2018.”

Bad Bad Diva has joined the Team effort, posting a 2:00.3 place finish, a third of a length behind Cayo Loco, in her Feb. 8 qualifier. The diminutive filly put in a big move when she was parked just before the half, then cleared cover by going three-wide for Harris.

Expect to see the odds-defying pacer make a first Ontario pari-mutuel start for her new connections in the coming weeks.

The purchase of the Rock N Roll Heaven—Diva Delight daughter was not a rescue or donation, stressed Sorella. The filly will instead contribute a portion of purse winnings to one good cause, while being a representative for another. “I hope this does open a few eyes in the game that even horses that have endured what Diva did can still be a racehorse, and competitive at that. I’ve been known to give people and horses second chances.”