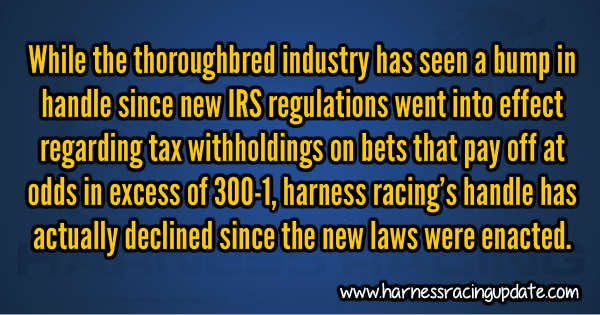 While the thoroughbred industry has seen a bump in handle since new IRS regulations went into effect regarding tax withholdings on bets that pay off at odds in excess of 300-1, harness racing’s handle has actually declined since the new laws were enacted.

With some tote companies taking longer than others to change their software reflecting the new rules, there is not an exact date as to when they went into effect. However, by Nov. 1 all tote companies were on board. From that starting point through Jan. 31, 2018, $204,911,633 was bet on U.S. harness racing. That represents a decline of just less than one per cent from the prior year when $209,407,838 was wagered.

The new regulations are most beneficial to players that chase bets with large pools and the possibility of large payoffs. In the past, a player might have invested $10,000 into a bet and cashed a “winning” ticket for $9,000 and be taxed because the IRS would only take into account the amount wagered on the actual winning ticket and not the total amount that the player put up. Not only did that discourage players from chasing large payoffs, it needlessly depleted their bankroll because the IRS would hold on to their money until the next year’s taxes were filed.

Andy Berg, a well-known harness bettor who is not afraid to bet large sums of money, believes the reasons the new laws do not appear to be helping harness racing is because the sport does not have many jackpot style pools that have the potential of large payoffs.

“In the thoroughbreds, they have more chances at big pools and super exotics and more carryovers,” Berg said. “Also, you have much, much bigger players over there and these new laws mean much more to them than harness players. We don’t have that over here. The $2 pick six carryover is a big thing in thoroughbred racing. In harness, it is unheard of. It’s a different mentality, a different type of player. There just aren’t that many big harness players in the same class the big thoroughbred players.”

Berg said that even when a harness wager might involve a large carryover, the sport does not have a lot of heavy hitters that will wager huge amounts going after the jackpot.

“These are high risk, high reward type bets,” he said. “You have to have a lot of money behind you and be willing to lose for a stretch, and I don’t think we have many players like that. The players going after these pools, they don’t bother with harness racing. I’m almost to the point where I’m getting squeezed out of harness racing and I’m trying to transition over to thoroughbreds because the only track that a person like me — someone who wants to bet a decent amount of money — can play is the Meadowlands and the Meadowlands races two nights a week. The big players aren’t attracted to this game because the pools are not big enough. A flat bet profit is pretty much impossible so you have to try to win by getting a piece of the rebate and to do that you have to bet good money, and over here it’s very tough to bet big money. There a few big harness bettors, but not nearly as many as you have at the flats.”

Les Stark, another prominent harness gamblers, has another theory, that maybe the numbers would be worse if not for the IRS changes.

“The handle in general in harness racing is taking such a dip,” Stark said. “The tracks that are operating with the best horses typically have the worst handles for reasons that are obvious to most. I believe that the new tax laws could have helped, but we’re losing so much in handle all the time the new tax laws just offset what would have been the normal decline in handle.” Thoroughbred handle figures for the Nov. 1 through Jan. 31 period are not yet available. However, thoroughbred handle was up 6.39 per cent in November and 3.85 per cent in December. For the calendar year 2017, thoroughbred handle increased by 1.59 per cent.

The effects of the new withholdings rules were seen at the Breeders’ Cup. Despite a slew of longshot winners, only 35 winning tickets sold on-track at Del Mar triggered Internal Revenue Service reporting or withholding via automatic W-2G filings across the two-day Breeders’ Cup World Championships. The previous year, there were 1,333 W-2G filings that occurred on-track at the host site.