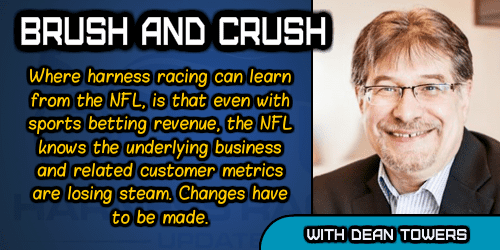 The NFL is beginning to look a lot like racing

Sure, one is still a powerhouse, but both sports can probably learn a little from one another.

I was chatting with a friend on email this week who said he felt that the Super Bowl buzz seemed muted this year; that the big game didn’t feel quite as big.

I agreed. If that is indeed true, maybe it shouldn’t be surprising. In 2017, the NFL saw regular season television viewership fall 12 per cent, and it was even worse in the playoffs. Attendance was off three per cent, with 22 of 32 teams seeing declines.

Those inside the sport are searching for reasons for these bad numbers:
• Instant replay and more commercials are making the games too long for demographics who crave instant gratification.
• The game is too dangerous. My kids aren’t playing it.
• You can’t hit anybody without drawing a flag. Boring!
• National Anthem! National Anthem!

Racing has gone through different, but eerily similar arguments. And, as crazy as it may sound to you, I don’t think – in terms of end users and participants — the two sports are that much different.

Football is a traditional game which once fit perfectly in a traditional world. Community is everything in the sport, from tailgates to booster events, and as brilliantly told in books like Our Boys, by Joe Drape, the sport is pure Americana.

Harness racing’s roots are similar. It’s an agrarian game, as the Little Brown Jug shows each and every year.

The problem for both harness racing and the NFL is that rural populations are declining; agrarian has given way to urban.

The NFL, like harness racing did for years, may be tempted to spend all their resources hoping to turn back a clock to a place where grandstands were full and parents enrol their sons in football instead of soccer. But that place doesn’t exist anymore.

For both harness racing and the NFL this is their new normal. The more time they spend trying to look backward, the less time to move ahead.

Is there a way forward? Here, in my view, is one way that the NFL can learn from harness racing.

Slot machines, whether we want to admit or not, have saved racing. Billions and billions of dollars have entered the industry through the one-armed bandits, and this alternate revenue stream was well ahead of its time. It’s not uncommon in 2017 to see revenue to the recording industry not come from CD sales, but from streaming and concerts. Getting new revenue from partnerships, or other avenues, is happening everywhere. This is old hat to harness racing.

For the NFL, their slot machines could be sports betting terminals. As you may have seen over the last few weeks, sports leagues are trying to earn a slice of betting revenue as it works its way through state houses. They, like harness racing before them, are right to pursue these dollars.

Where harness racing can learn from the NFL, is that even with sports betting revenue, the NFL knows the underlying business and related customer metrics are losing steam. Changes have to be made.

The fans who complain that NFL games take too long are seeing action. The NFL has gone to split screens for commercials, and have cut minutes of ad time in each game (despite the top-line loss of revenue). Instant replay, which can disrupt game flow, has been changed and tweaked and will probably see fan-friendly changes in the offseason. Rules changes are happening at a Niatross-type pace — in fact, just yesterday, the NFL announced they’ll be looking at the dreaded “catch rule” with a possible complete overhaul in the cards for next season.

Harness racing has been horribly slow on the switch with similar complaints. Post drags – tantamount to commercials or replay reviews – have been getting more frequent and longer, not the other way around. For many years, the different rules by jurisdiction has not only hurt the end-product, but angered fans, horsepeople and owners alike. Only now, through initiatives at Standardbred Canada and the USTA, are uniform rules being addressed.

Not only does the sport need to listen to fans more, they should probably look at investing into them. Cue the Atlanta Falcons.

Just this past season, the Falcons lowered prices dramatically on just about everything they sell at the game; hot dogs, by way of example, were priced at $2, versus a league average of $5.19. The result was dramatic. The Falcons sold more concession items by the end of the first quarter than they did all game in 2016, and sales were up over 50 per cent. Merchandise sales and other revenues skied. In surveys, patrons gave the Falcons the best customer satisfaction numbers in the NFL, up from 18th a year earlier.

“Sure, we could shake out a few more dollars of margin under the old model, but given all the other positive benefits, it’s the bigger revenue play, period,” noted the person in charge of the policy.

When was the last time we’ve seen a customer experience survey that good for harness racing? I don’t think we ever have, because harness racing (in large part, there are exceptions) has squeezed their customers, not invested in them. Higher and higher takeout is commonplace; customer complaints show troubling trends.

Like harness racing’s, the NFL’s problems are real. I believe they’re right to follow our lead when it comes to attracting new revenues, like sports betting. And they should certainly have already learned from us that looking in the rear view mirror in a changing, urbanized, connected world is foolhardy.

But we need to learn from them, as well.

Harness racing needs to completely commit to customers, fans and owners. Just like they do to the NFL, they matter, and investing in them — while it might involve some short term pain – is, in my view, vital to the game’s future.