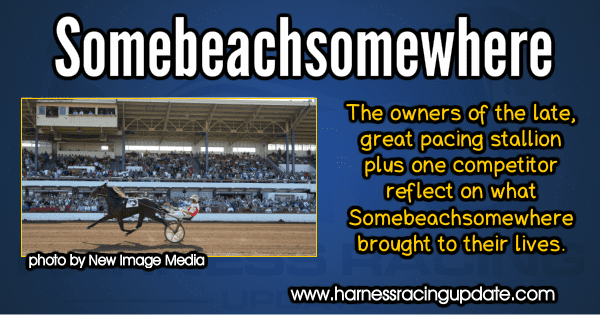 The owners of the late, great pacing stallion — plus one competitor — reflect on what Somebeachsomewhere brought to their lives.

Rhonda MacGrath: Everyone feels the loss

Stu Rath: If you were from Atlantic Canada it was your right to go to the winner’s circle

In May of 2006, I just lost my wife of 40 years to cancer. A friend of mine that was in the harness racing business… said, ‘Why don’t you come to Lexington to the sale with us? We’re looking at buying a horse. So, I thought, ‘That’s a pretty good idea.’ They had six people that were going to each put the $10,000 in. One had dropped out, so they asked me if I wanted to come along and put in the $10,000. So, it was a good decision that I agreed.

I had a good time. I’m from Truro, so I followed as Brent brought him home and trained The Beach. From there it was quite a ride for us. We followed him around and watched how he did.

At that time, they called them the Beach Parties. That really got things going. Even now, harness racing in Canada is tough. I’m involved (at Truro Raceway) now to try to save the place because of the lotteries and the gambling machines that have really hurt harness racing. On account of what we did with The Beach, I think something is going to happen there. I will help out myself, if necessary.

As for The Beach, it was really interesting the way he became such a hero, not only in Truro, but especially at Mohawk. In the winner’s circle, if you were from Atlantic Canada at all it was your right to go out there to the winner’s circle. They always used to talk that Beach used to show off.

It’s unfortunate the way things happened, but I think we did everything possible that we could.

It was quite a ride.

— Stu Rath / member of the Schooner Stable that owned Somebeachsomewhere

Pye: Much more than a “once in a lifetime” horse

Brent MacGrath is my business partner, in a number of businesses, mostly automobile dealerships. He is also my best friend. We have worked together now for 27 years. During most of that time, we have owned horses together. It was really a lifelong hobby of Brent’s.

There were always a number of partners, usually six or less. Brent brought an expertise to the barn that showed he had a firm understanding of the sport and an uncanny expertise about the qualities of these animals. I was an owner with Brent on 10 horses before he went to Lexington and bought Beach.

I had the opportunity to visit daily with each of our horses. Brent not only trained them early every morning, he fed them at noon and in the evening. This wasn’t an investment, where someone else did all the work. Brent was working two jobs, and one of his job trainees was Somebeachsomewhere.

It’s easy to look back and marvel at how healthy, and how friendly, and how frisky, and how handsome Beach was. He looked good, he trained well and never seemed to get sick.

Then there were the races.

Somebeachsomewhere was much more than a once in a lifetime horse. Once in a lifetime might mean winning one of the many world class races that he won. This unbelievable horse, as a two and three-year-old, showed us all he was going to win and do it with conviction every time. This — in the judgement of those more expert than me — perhaps best of all time horse, won 21 of 22, a near mathematical impossibility.

He was still more like a friend, perhaps like a favorite family dog, when he interacted with you in the barn. He loved to eat carrots and apples out of your hand, more like a pet than a world class athlete. Brent’s wife Rhonda spent hours and days as a groom and friend to Beach. How much did the personal relationship that Beach had with both Brent and his wife Rhonda affect his career? We’ll never know, but in my mind it was a significant factor.

It is difficult for us, as both owners of, and friends to the horse, to comprehend that his time is now over. A hell of a story, much more than once in a lifetime.

— Garry Pye / member of the Schooner Stable that owned Somebeachsomewhere

Pamela Dean: Our hearts are heavy

Our hearts are heavy as we mourn the passing of the extraordinary-successful racehorse and stallion Somebeachsomewhere. I am honoured to have been part of the ownership of Beach. Now is the time to reflect on all the wonderful memories he presented each and every time he stepped on a racetrack. His legacy will live in his foals, our memories and those of the thousands of race fans who cheered Beach to each finish line. Beach heard you!

— Pamela Dean / member of the Schooner Stable that owned Somebeachsomewhere

Bagnell: His legacy will be felt for years to come

Somebeachsomewhere was a true champion in all respects. Post retirement from racing, he continued to show his greatness through his special personality and demeanour. I will truly miss our visits to Hanover and the Beach encounters I’ve enjoyed over the past few years.

His legacy will be felt for years to come, and it’s truly been a rewarding and lifetime experience for me to be involved.

— Jamie Bagnell / member of the Schooner Stable that owned Somebeachsomewhere

Beach will be part of the Petitpas family forever

Somebeachsomewhere brought The Petitpas Family to the highest stakes of harness racing that most people would never see in a lifetime.

Beach was a dream for any standardbred owners, grooms, trainers, drivers, racetrack owner and breeder.

His two years of racing was a very exciting time of our lives. Everywhere we would go, people would ask us about Beach; even people who had never went to a race before.

The big highlight was race night; our family was surrounded by large crowd of friends and fans to cheer him on. Many fans not present at the track would gather together and have a Beach Party to watch on simulcast (at Truro Raceway).
Beach raced all the big races and he never disappointed his fans.

The best reflection of all, is when our grandson would visit, he had to give a kiss to a Beach photo we had. He was also present for several races.

After Beach’s racing career was over, we purchased a few broodmares and sold them as yearlings in Kentucky and Harrisburg. Because of Beach, we had adventures in breeding.

It was very rewarding seeing how high the average price of Beach yearlings was selling year after year.

Watching all the races of the champions he produces from his first crop to present time, is a big reminder of Beach when he was racing.

Beach will be part of the Petitpas Family forever. We are going to be building a Beach room in our home this summer to display all his trophies, awards and memorabilia.

We are looking forward to all his stallions and mares to keep on producing champions.

It has been a journey of a lifetime, to be an owner of such an amazing horse of the sport we dearly love.

MacDonell was class and grace even in Somebeachsomewhere’s lone defeat

We raced against Somebeachsomewhere in the Meadowlands Pace in 2008 and we knew we weren’t going to beat him. We knew he was the best and were happy we were able to stay so close. But that’s not what I remember most about the race. It’s not what I remember most about that marvelous horse, who brought together two nations and bridged the eternal divide that exists in our industry between the big hitters and the little guys.

What I remember most was the shuttle ride from the track to the paddock immediately afterward. We were there, alone on the shuttle going back to see Linda (Toscano) and our colt, and the only other person on the bus was Paul MacDonell, who of course drove Somebeachsomewhere that night, drove him every night. Poor Paul. He looked as though he had just come from a funeral. Despondent, almost in shock about that memorable drive, no doubt kicking himself on the inside for the way it unfolded, he nonetheless was polite and courteous when I offered my condolences and praised his horse.

I think about that all the time, whenever the sport we all love gets me down. Whenever it feels like the bad guys are winning and the good guys are losing. It was probably the first time in a countless succession of similar encounters from July 2008 onward where that poor man had to accept condolences on that race and congratulations on that horse. Where he had to smile when his heart was breaking. But in that moment the man mirrored the horse; no excuses, all heart, all grace. A class act. An honor to his craft and the sport.

Paul knows that he will never sit behind another horse like Somebeachsomewhere and that their lives are forever linked. And now that the great horse is gone, gone too soon, gone in a way none of us should ever go, it falls to Paul, and to the other connections, to keep the horse’s legacy alive, much in the way that Penny Chenery kept alive the legacy of Secretariat, the way Ronnie Turcotte still does. Actually it is incumbent on all of the rest of us to do so as well. In that moment on that shuttle, Paul no doubt felt all alone. But on Sunday he wasn’t. And he never will be again whenever men and women talk of great horses who made the humans around them greater, too.