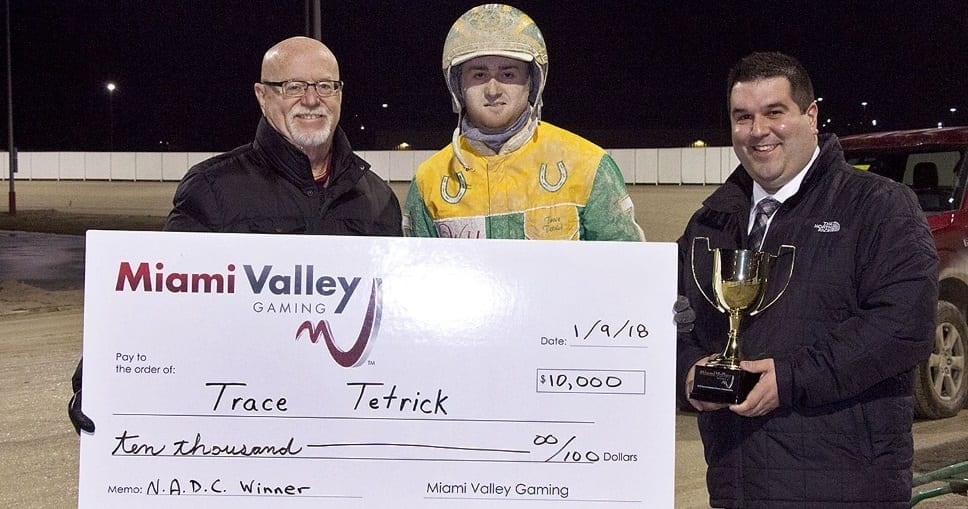 USHWA’s Rising Star won the last three races to jump from ninth to first at Miami Valley Raceway in Ohio.

For Trace Tetrick, 2017 was a great year – 569 wins, $6.8 million in earnings, a pair of Breeders Crown titles and the United States Harness Writers Association’s “Rising Star” award. With his victory in the $25,000 North American Drivers Challenge on Jan. 9 at Miami Valley Raceway, 2018 is off to a great start.

Coming from ‘off-the-pace,’ Tetrick won the final three races in the competition to rally past Chris Page to take the second edition of the challenge and the $10,000 first place check.

The three-day event started with the preliminary rounds on Sunday and Monday. Thirty drivers competed in eight races each and the top 10 points earners moved on to Tuesday’s final round where the points are reset.

It didn’t take long for the final round fireworks to begin as Simon Allard guided Real Revenge to a 3 3/4 length win, paying a whopping $216.40 to win. Peter Wrenn took the third race at $74.80.

Miami Valley regular, Chris Page won two of the first four races and held a sizable 18-point lead over Wrenn at the half way point.

With three races left in the competition, Tetrick found himself in 9th place, 54 points from the pacesetting Page.

Going into the final leg, Tetrick needed at least a second place (20 points) finish to have a chance at the title. Page could have iced the event with a third place (14 points) finish in the final race.

When the field of 10 went postward, Tetrick was behind the bettor’s choice, Dalianna, and Page found himself with Desire One, the longest choice on the board.

Tetrick gunned the five-year-old pacing mare off the gates wings and took the early lead. A bad break in stride by Alibi Seelster (Louis Roy) gave Page at least a ninth place finish (one point), forcing Tetrick to win the finale to take the title outright.

E R Hilary (Corey Callahan) stuck a nose in front at the three quarter mile pole. Tetrick rallied Dalianna in the lane and edged Pretty Real Desire (Simon Allard) by a half-length. Page could not urge Desire One past any other rivals and finished ninth.

“I know we are going to Florida next month,” said Tetrick. “We’ll save some of the (prize) money for down there.

“I can’t complain. Last year was a big success and so we kind of carry it over and keep the momentum going forward. It was a good time. It is a good event to have and a good event to support.”

The North American Drivers Challenge is a welcome distraction for fans and drivers during the normally “dead” part of the season.

“I was challenged by the assistant general manager, John Marshall to start the meet as strong as we finish it,” said Gregg Keidel, Miami Valley’s race secretary. “The (drivers challenge) has created new export partners and helped business.”

Looking for a signature event in the wintertime is difficult.

“It is tough to get the better horses here at the start of the meet, so I thought we should get the big name drivers,” said Keidel.

What about changes for the expected third annual event? “At the end of the meet, we’ll sit down and discuss possible changes, maybe a tweet or so, nothing major,” said Keidel.