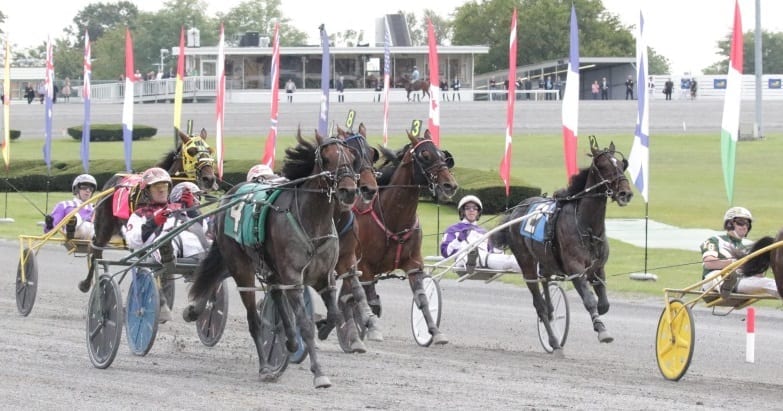 Soft-spoken Jim Devaux lets his driving do the talking.

When one interviews Jim Devaux, they may want to turn the phone up as loud as it goes. The 50-year-old lifelong horseman always pauses before answering questions. And when he does respond, don’t expect him to be long-winded. His answers are usually concise and just a notch or two above a whisper, unlike his statistical resume for 2017, which screamed loud and clear that he is one of the better drivers on the New York ‘B’ circuit.

Devaux has been married to wife Tammy for 20 years and has two daughters, Samantha and Kiersten. His dad, Adrian, was in the business. His sister, Sherie, is second trainer to big-time thoroughbred conditioner Chad Brown, and his brother, Ken, still has some horses. “I do the driving for him,” said Jim. “We like to keep it in the family.”

Devaux put together a marvelous 2017 by doing what he likes to do best — drive horses at Monticello and Saratoga, and drive plenty of them. The lifetime winner of over 5,000 races took 544 of them during the course of the year, with his horses earning just over $3 million, both career bests.

His Monticello numbers were especially gaudy. Devaux won 301 races at the Mighty M from only 1,204 starts for a remarkable win percentage of 25. When you consider he drove day in and day out against the other drivers that made up Monticello’s “Fab Four” (Jim Taggart Jr. 256 wins, Bruce Aldrich Jr. 244 and Michael Merton 200), the numbers are even more impressive.

But don’t look for Devaux to blow his own horn about his success. That is clearly not his gig.

“I drive for Dolores Basilone,” said Devaux of Monti’s leading conditioner. “She is my big account, but if I’m not driving one of hers, I usually pick up another horse.”

Much of Devaux’s success is his willingness to drive at both Monticello and Saratoga Raceways on a steady basis, something he has done since 2009.

“I love driving, that’s what I wanted to do,” said Devaux. “For me, I figured that Saratoga was the best spot to go.”

There were a couple of years where Devaux would race at Monticello, get in his car, drive 150 miles to Saratoga, race that night, then come back home after the races. This would happen two or three times a week.

“I’d drive at Monticello,” said Devaux. “And then hope for the best driving to Saratoga to make the first race. Everything is kind of winding down now, but through the years, I did the doubleheaders a lot. During the course of (2017), me and Bruce (Aldrich) were kind of fortunate. Given the schedules, we could pretty much do both tracks without killing ourselves.”

Monticello is home to Devaux, but on Thursdays he drove at Saratoga only (both tracks had matinees) last year because of the bigger purses and is likely to do the same once Saratoga resumes Thursday racing in March (He finished third in the standings there in 2017 with 240 wins, 26 behind leader Frank Coppola Jr.). From 2013-17, Devaux has had a superb five-year run, winning 2,080 races, but his biggest score of all came on Oct. 14, 2017. That was the day Twister Bi beat Marion Marauder, Resolve and some of the best trotters on the planet in the $1 million, mile-and-a-quarter Yonkers International Trot. Also on the Yonkers Raceway program that day were eight New York Sire Stakes Finals, and Devaux won one, with the best 2-year-old pacing colt he’s ever sat behind, Jersey Jim.

“I have driven quite a few over the years for (trainer) Perry Simser,” said Devaux. “He’s a pretty nice horse. Very versatile. I have to give Perry a lot of credit. Every horse I’ve driven for Perry was always very manageable. He really does a great job putting a good mouth on them. Jersey Jim, for a little horse, has got a lot of talent.”

Devaux didn’t necessarily love his chances heading into the race. The bettors agreed, sending him to the gate at odds of 12-1.

“I thought I had a shot,” said Devaux of the $225,000 event. “I knew he was going to give me everything he had. The trip went good for me. I took him off the car, sat him in, moved him at the three-quarter pole, got on (Jim) Morrill’s (driving Paprike Blue Chip) back in the last turn, tipped off cover and we went by. Morrill had one of the better ones. It happened to work out in my favor.”

Based on the statistical data Devaux has amassed – especially over the last half-decade – one could surmise that he could drive competitively downstate at Yonkers Raceway, where the big purses dwarf those at Monti and ‘Toga.

“I have never really thought about driving on the big-time stage,” said Devaux. “I enjoy doing what I’m doing. I love driving at Monticello and Saratoga. I’m 50 years old. Going down there and starting all over again. I don’t see me doing that.”

Devaux is a truly humble man. When asked why he had such a good year, he put the credit squarely on shoulders other than his own. “I had the power,” said Devaux. “I wasn’t doing anything differently that I noticed. It all came down to power. There are a lot of great drivers out there, and I consider myself a driver pretty much like everybody else.”

True to form, Devaux wasn’t even aware that 2017 was his best year ever.

“I don’t really keep track,” said Devaux. “I know I was the leading driver at Monticello but I don’t know by how much. I just get up and I go to work. I do appreciate my name getting out there, but I’m more of a laid-back guy. I’m not really a big publicity guy.”