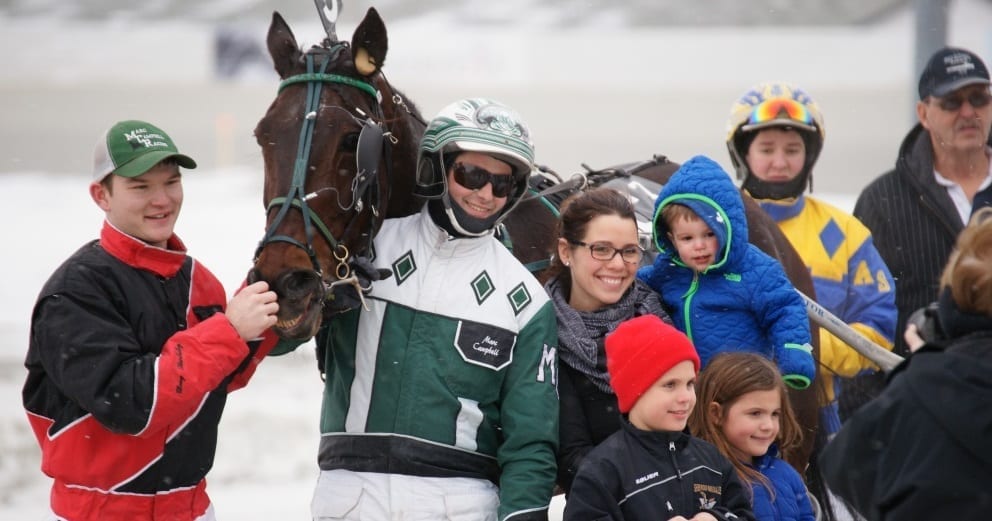 New Year’s Day 2018, Red Shores Charlottetown racino is quiet, save for a handful of Gulfstream simulcast bettors and the casino-game faithful. The previous night, Top of the Park restaurant was sold out and spectators saw Marc Campbell register a half-dozen wins to set a single-season record at the landmark track of 162 driving victories. His 255 wins in the sulky in Atlantic Canada in 2017 is the second most in the long history of Maritime racing.

Campbell is one of two 2017 finalists for the O’Brien Award of Horsemanship, facing Rideau-Carleton Raceway trainer/driver Guy Gagnon. The honor is bestowed upon industry participants who excel in more than one area (any combination of driving, training, breeding, and/or ownership), with a level of professionalism reminiscent of award namesake “Gentleman Joe” O’Brien. (A third potential finalist, Travis Cullen, removed himself from the ballot in December after elevated TCO2 results in a horse he trains and drives, Oh K Man).

The frigid morning after a blazing-hot night in the sulky, Campbell is back to work with his stable of 20. “This is the first time I’ve had this many horses at this time of the year,” he said. “We still have a lot of racehorses, which we don’t usually have, and it’s great.” Assisted by “right-hand man”, rising trainer/driver Ryan Deroches, Campbell stays until lunchtime, readying young horses for the coming season.

“We put in half a day, I guess,” he said. “We try to get some time off. Tomorrow’s supposed to be really, really cold [-20 Celsius/-4 Fahrenheit], so if we don’t get out tomorrow, we got them out today.”

It’s that work ethic that helped win Campbell his first O’Brien Award of Horsemanship in 2012. “Last year [2016] I was nominated, but didn’t make the finalists,” he said. “I kind of put it in my goals earlier in the year [2017], when I saw the kind of horses we had and all my two-year-olds came back really good.”

On numbers alone, Campbell has had a standout season. A 30.8 per cent win percentage, a .442 UDRS rating (second in North America among drivers with 500+ starts), and a .526 UTRS rating (#1 on the continent for trainers with 300-499 starts) document his success, yet don’t tell the whole story. The PEI-based horseman said loyal owners and outstanding horses made the difference in 2017.

“I don’t really go trying to break records or anything like that. We just had a really strong barn, with good young and old horses, a good mixture. If we sold a horse or something like that, there was always another that came right after them that performed just as good or better. When you notice you have these kind of horses, you just try to roll with it, and keep pushing and pushing and pushing.”

Campbell, like many Maritime horsemen, has visited Ontario to try his luck. He elected to come back to PEI following a stint working for Anthony MacDonald. “I got banged up a little bit, so we [he and wife Natasha] came home and we got married and had a kid, and three more kids after that one,” he said. With the support of family, plus long-time and new owners sending him quality horses, Campbell finds himself in an enviable spot, but not one he’s geographically committed to forever.

“I don’t know what keeps me here,” he admitted, a few days away from departing for the 2018 North American Drivers’ Challenge at Ohio’s Miami Valley Racetrack. “I like it and I like my owners. I don’t mind a little downtime here and there, but we’ve started getting other horses too. We’ve been going to Harrisburg the last couple of years, and we might test that water at some point [in Pennsylvania].”

Campbell is one of 28 drivers confirmed for the Jan. 7-9 tournament and will attempt to dethrone reigning Challenge champ Doug McNair. He’s pleased to represent the Maritimes on the continental stage, equally happy to further his professional opportunities. “That’s the good thing about it—you get to meet new people and make connections by going to these places, and maybe open doors. Maybe one day I will go to Ohio or somewhere, you never know.”
Ryan Desroches, Adam Merner, Corey MacPherson, and Gary Chappell will handle driving duties for Campbell’s seven trainees on the Jan. 6 card at Charlottetown.

Opportunities have presented themselves for the Winsloe, PEI horseman before, in the form of an ongoing friendship with the Burke family and Gold Cup and Saucer catch-drives for Burke Racing. Not wanting to look too far into the future, Campbell said he’s focused on his stable and Maritime regional campaign for 2018: “Right now, this is my home and this is what we’re doing.” There are 13 two-year-olds training with him at the moment, one of them Ontario-eligible, one Pennsylvania-eligible, the remainder Maritime-breds. Four are trotters. All make him optimistic for the upcoming stakes season.

The 2017 campaign ended on a flat note for Campbell, as the drive that could have yielded a personal milestone in the year’s last Preferred pace instead went bust, thanks to a sulky tire blow-out. A game Rose Run Quest still hung on for place money. “It’s kind of funny, the way the night went,” he said. “I really thought that [Rose Run Quest] could win. I’d never got seven [driving wins] in one night before, and I’d love to get that. I’ve had six three or four times, and then something like that happens. I guess it wasn’t meant to be. He still raced really good.”

Campbell, 33, now measures his achievements differently than in the past. He tells HRU that he considers the greatest mark of success to be maintaining his stable’s condition and results “from start to finish” of the racing season. Being an O’Brien Award of Horsemanship finalist is also more significant the second time around: “Last time we won an O’Brien, I was a little younger and I kind of thought it all just fell into place. Then you realize, it doesn’t matter how good you are—you’ve got to work hard.”

He has been driving professionally since 2004, and before that, in the PEI Matinee Racetrack Program. His grandfather, Charles MacDonald, and uncles helped him in the beginning. He was later mentored by Charlottetown horsemen Paul MacDonald, Walter Cheverie, and David Rose, before joining Anthony MacDonald’s Ontario operations in 2006 to further his skills there. After injuring an ankle, he returned to PEI to work for trainer Earl Watts.

Campbell said he doesn’t really aspire to become a full-time catch driver. Developing babies into racehorses remains one of his greatest satisfactions and motivations. “It’s kind of been our motto: As long as you work hard and apply yourself, and don’t give up — keep pushing forward — you can succeed in anything you want to do,” he says, advising that young horsepeople can still find or create viable careers in harness racing. “There’s days where you say, ‘Frig—it’s -20 today, I don’t know if I want to take that horse out!’ But I grin and bear it, and do it.”

No days off? Almost, laughs Campbell.

“I’m not a slave-driver. We do take a couple of days off, here and there. It’s tougher when you have racehorses and babies. Sometime, if you had all racehorses, you wouldn’t have to do much at the barn that day. You’d just go in and feed them, because they all raced yesterday. We have a large number of both, so the days that the babies have off, the racehorses might have to go, so it does make for a long summer and a long year. I’ll give the boys a little break here, after we finish racing.”

The Red Shores Charlottetown season concludes with the afternoon races on Saturday, Feb. 3, 2018. The 2017 O’Brien Awards are scheduled for that same evening, at the Hilton Mississauga /Meadowvale, Mississauga, ON.