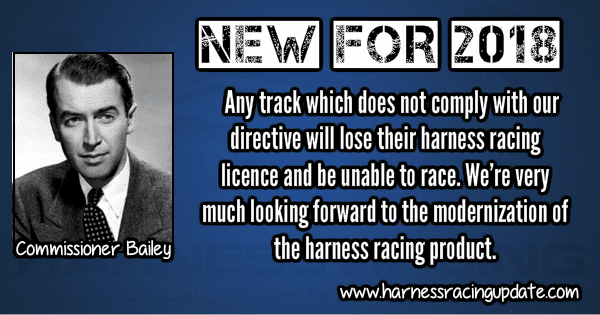 Commissioner Bailey: “In 2018, It will be a (more) wonderful sport”

Here at Harness Racing Update we’ve landed some major scoops over the years, but if I do say so myself this might be the best scoop ever: We’ve been granted an interview with the newly elected Commissioner of Harness Racing, George Bailey.

Below the new Commissioner will share what will be implemented in 2018, and detail his grand plan for harness racing’s revitalization.

HRU: Thanks for granting us this interview Commissioner Bailey. What’s first and foremost on your list to fix in 2018?

CB: A new directive we’re most excited about is a 12-month plan for revitalization of our on-track product.

We believe John Campbell’s rules committee will have to be fast tracked, and in six months uniform rules will be enacted across North America. No longer will trainers, owners, drivers and fans be in the dark on how many pylons is a violation or not based on what track they’re at, or watching. Whip rules will be the same everywhere. Post parades will be uniform. If you’re watching a race in Ohio or Ontario, you’ll be watching the same exact race, with the same exact rules.

In addition to this, we’ve created a Harness Racing Control Room. Any and all inquiries will now go to this central office for adjudication. Fans and horsepeople will be assured infractions are called in a uniform fashion. And inquiries will be dealt with quickly, because time is money, and making fans sit around waiting is not wise business.

Any track which does not comply with our directive will lose their harness racing licence and be unable to race. We’re very much looking forward to the modernization of the harness racing product.

HRU: What about bettors, Mr. Commissioner? Is there anything new for them in 2018?

It’s well known that when takeout is lowered a horseplayer gets her wings, so on Jan. 1 we’ve arranged takeout at all tracks be set at 8 per cent win, place, show with all other exotics 12 per cent. We’ve assembled a crack staff of analysts to monitor the results, and we’ll be able to slide this number up or down for various bets as needed.

Revenue will be down early on, so we’re using slot money from our new slot money slush fund to make up the short fall. This is a five-year plan, so gamblers worldwide will have certainty it will not change.

We’ve also allowed tracks only one jackpot bet per meet, so money is not taken out of circulation. Any new bets or betting menu changes will have to pass our betting committee (which is comprised of gamblers) by a 60 per cent supermajority.

HRU: Anything else?
CB: Yes. We’ve passed a rule that outlaws post drags. Tracks believe handle will fall when we implement this and they’re probably right — if the NFL made people sit around 10 extra minutes after every touchdown, concession stand revenue would be higher, too. But it’s bad business. Angering fans and bettors is no way forward.

Being vigilant of post dragging is also important for our new scheduling initiative. We plan to schedule races, off times and race dates from the central office. This will be a godsend to fans who play more than one track. Each night, no matter how many tracks are racing, there will be no overlap in post times.

HRU: Is there anything new for fans?

CB: We’ve finally settled on a Triple Crown (with a bonus for the winning connections and all owners who race in all three legs). The races comprising the Crown will be the North America Cup, Meadowlands Pace and Little Brown Jug.

We’ve also created a 4-year-old Crown with the Haughton, Canadian Pacing Derby and Breeders Crown Classic as the three jewels. We’ve devised a marketing plan for both.

Bonuses for race participation, and Triple Crown wins, will be paid out from the slot fund. We believe fans will love both series of races.

We’ve also implemented a directive for the Yonkers International-Breeders’ Crown Open Trot double. One of the great complaints from fans is that the horses sent for the International in October don’t stay around later for the Crown. This year, we’ve got incentives to make that happen.

HRU: Integrity issues have plagued the sport for some time. Is there anything new on this front?

CB: We’ve got a few initiatives planned in this area.

First, we’ve created a blood passport and accompanying database for every horse in North America. When horses change hands at sales or through the claim box, their blood is drawn and stored. Our investigative team will monitor the bloodwork, and our big data team will cross reference this information by trainer. When we see patterns we will act forcefully.

Second, beard training is a pox on harness racing’s house. If and when a trainer gets a positive, only accredited trainers who have passed due diligence will be acceptable for transfer of racing stock. If the owner does not like the listed trainers, he or she will not be allowed to race.

Third, through funding from the slots slush fund, an out of competition testing team will go barn to barn, testing horses, and learning more and more about any new potential drug that’s being used on backstretches.

We believe all three planks will help make harness racing better, and attract dollars that have sat on the sidelines because of some who’ve made a mockery of our fine sport.

CB: I’d like to thank everyone who voted for me in my landslide win, and in turn have allowed this office to have such tremendous power. We’re going to fix this sport, brick by brick. Your continued support is appreciated.

There you have it folks – the new commissioner George Bailey. And as I’m sure you’ve figured out by now, this was completely tongue in cheek (even if you and I may agree with most of it).