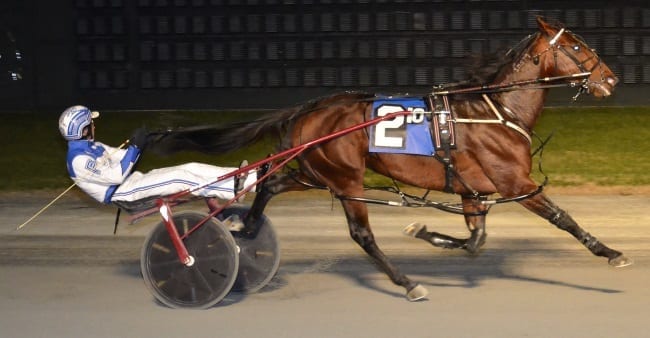 Downbytheseaside capped a perfect month with a strong victory in the Progress Pace. His stablemate, Fear The Dragon, was second.

Downbytheseaside left voters little choice in the 3-Year-Old Colt and Gelding Pacer and Pacer of the Year elections with a dominant performance in Thursday night’s $308,060 Hap Hansen Progress Pace at Dover Downs, the final major stake on harness racing’s 2017 calendar.

His main rival (and stablemate) Fear The Dragon did not go the best of trips and settled for second in a game performance.

“The horse is obviously real sharp right now,” said winning driver Chris Page. “It’s a great way to end the year. It’s always a great feeling to win, but this is special. It’s the biggest win of my career. He’s just a good horse. This horse has performed well all year. I just had to keep him out of trouble.”

“This was pretty cool,” said Brian Brown, who trains the horses that finished 1-2. “Being the last race (for both horses), it’ll be one that really sticks out. There were other races that will stick out, too. But what a mile both horses went.”

Like a dad who didn’t want his son who failed to win to feel bad, Brown spoke glowingly of Fear The Dragon. “What can you say?” said Brown. “Off all that time (FTD missed a month before last week’s Progress elimination battling a blood virus). He came first up. (Driver) David (Miller) told me after the race, ‘I thought I could pace in :49 tonight. But I thought I would win.’ Seaside was really good tonight. He wound up with a better trip. What a mile that horse went.”

At the start, 30-1 longshot Blood Line exploded from the gate and had the top at the quarter in :26.2. Page moved Downbytheseaside (Somebeachsomewhere—Sprig Hanover) out of the three hole just after the quarter and hit the half in :54.2 as Fear The Dragon was on the go first over after vacating the rail from fifth.

DBTS powerfully progressed his way through a third quarter of :27 to extend his lead to two lengths at three-quarters in 1:21.2, and while Fear The Dragon was his usual determined self, he could not keep up with his razor-sharp stablemate, who finished a perfect four-for-four in November by drawing clear at the wire by 4½ lengths in a lifetime-best equaling 1:48.3. Mac’s Jackpot rallied to get third, 2¾ lengths behind FTD. As the 1-5 favorite, DBTS paid $2.60 to win. The exacta returned $3.20.

Downbytheseaside took on his division’s best all season long while battling sore feet, switching back and forth between aluminum shoes and flip flops. He also had a liver infection. How did he bring his best so late in the year? “It’s a testament to the horse,” said Brown. “He’s gotten sounder. His feet are better. He has blossomed in the last month-and-a-half, two months. He likes the way he’s been racing. He likes to be up in the mix and rolling along.”

Downbytheseaside began the year with David Miller in the bike, but Miller opted for Fear The Dragon, so Brian Sears became his pilot. That is, until November, when Ohio regular Chris Page took over.

“We wanted to let Chris drive that race at Hoosier (the Monument Circle, the first of his November four-pack). At that point, I really didn’t know we were switching. Then when the horse wins in 1:48.3 and wins the way he did, it was kind of hard to take Chris off after that. Chris was racing him the way the horse wanted to race. One of the owners said, ‘How does a guy like Chris ever get to this level if he doesn’t get a shot?’ It was a group decision among the owners and myself (to make the change) but I’ve got nothing bad to say about Brian Sears. He did a helluva job.”

So now Brown’s big two ride off into the sunset. Or do they?

“Seaside is going to Sugar Valley Farms (Delaware, OH),” said Brown. “He has 100 mares booked to him. It’s filling up fast.”

It’s highly likely that Fear The Dragon (Dragon Again—Armbro Cinnamon) will also head to stud duty, but Brown was non-committal.

Brown seemed to take a deep breath as he looked back on the huge year he’s had. “It’s been a fantastic year with the whole barn. I’ve had nice horses before but I’ve never had three horses like this (add 3-year-old filly pacing standout Blazin Britches to the mix) that can do what they’ve done this year.”

Okay, Brian, so tell us: which of the two is more gifted?

“I don’t want to say,” said Brown. “They are both completely different horses. Seaside is more of a raw speed type while Dragon has so much guts. He never gives up. The only thing they have in common: They are both so ornery in the barn. They give their grooms trouble every day.”

So Downbytheseaside is the favorite to take home the 3-Year-Old Colt and Gelding Pacer and Pacer of the Year award. Blazin Britches, the 3-Year-Old Filly Pacing trophy. There’s also one more piece of hardware that the voters figure to be sending to the barn as well:

Trainer of the Year.

Driver Russell Foster, a 28-year-old who competes regularly at Dover and Rosecroft, had his biggest day yet in the sulky, guiding two winners in the four $100,000 Delaware Standardbred Breeders Fund Finals on the Progress Pace undercard.

The daughter of Anders Bluestone—Victory Starburst won her third straight and fourth overall in eight starts. Her earnings now stand at $125,650 for trainer Tui Stone.

Foster struck again with another second choice in the 2-year-old colt and gelding pace with Slick Tony ($5.80), gunning down 2-5 public choice Evolution Tour at the wire in 1:51.4. The No Spin Zone-Queen Kathy product won for the fifth straight time, upping his seasonal stats to nine wins in 11 tries and a bankroll of $151,797 for trainer George Leager.

“Ones that win,” was the understated Foster’s response when asked in the winner’s circle if he preferred driving trotters or pacers.

The biggest purse that Foster had ever won prior to his DSBF successes was for $20,000. Yesterday, he won a pair for five times that. In this, only his second year of driving full time, Foster has won 300 races, good for a bankroll of over $2.3 million.