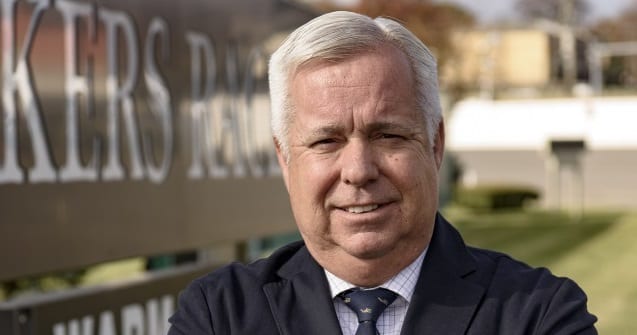 Cammie Haughton, the new director of racing at Yonkers, is passionate about trying to increase the bet at the New York track.

Cammie Haughton needs to get some shut-eye. He talks like a guy who’s had way too much coffee. Unfortunately for the new director of racing at Yonkers Raceway, he doesn’t figure to do much snoozing any time soon.

“I’m not sleeping at night,” said the 57-year-old born Robert C. Haughton. “That’s the truth. This is going to be a tough one.”

In his position, which is a newly created one, Haughton will have much on his plate. But he’s dealt with plenty in a life spent in the harness game – much triumph, much tragedy – so he could prove up to the task.

His resume looks like one that fits well with the new gig. He is the son of arguably the greatest horseman the game has ever known, William Haughton, and early on followed in his dad’s footsteps.

Cammie was 17 when he got his ‘P’ license but ended up driving in only a little more than 1,000 races. “I was young,” he said. “And I was real anxious to drive everything I could down at Pompano. But my father said to me, ‘If you drive bad horses, you are going to look bad.’” So Cammie picked his spots. When Billy couldn’t make it to the Empire State, Cammie would drive the family’s New York Sire Stakes horses.

The best Cammie ever drove was Trenton Time, a standout 3-year-old colt from 1980. One problem: There was a horse by the name of Niatross also racing that year. Storm Damage was another sophomore pacing standout.

When asked if his horse was the third best that year, Haughton said: “My horse was second best. My horse could beat Storm Damage.”

The Haughton family has seen plenty of success, but also more than its share of heartbreak as well, which altered the course that Cammie would follow.

During Trenton Time’s sophomore campaign, Cammie’s older brother Peter, an up and coming driving star, was killed in a car accident. Later that year, the Haughtons were in the Hambletonian winner’s circle at the final Hambletonian held at the DuQuoin State Fair with Peter’s horse Burgomeister. “Now, THAT was emotional,” said Cammie.

Six years later, his Hall of Fame dad passed away from injuries suffered in a wreck at Yonkers. “When my father died,” said Cammie. “I stopped being a horseman. I was shaken up really, really badly. So I went another route.”

Starting in 1988, the then 28-year-old Haughton started a 19-year run with the New York State Racing and Wagering Board, serving as an associate judge at Buffalo before being the presiding judge at Monticello, Yonkers, Saratoga and Vernon. He would also serve as PJ at the Meadowlands during his six years at the mile oval.

“We did some promotions for empirecitybets.com that worked,” said Haughton. “(Vice president and chief operating officer) Bob Galterio was impressed and gave me the (director of racing) position.”

Haughton, anticipating what lies ahead, then kidded: “What did I get myself into?”

Only time will provide the answer to that query. In the meantime, Haughton has some ideas designed to increase a nightly handle (the primary focus of his job description) that continues to fall short of making waves in harness racing’s waters.

“When I was presiding judge at Yonkers,” said Haughton. “I noticed that Northfield (Park) was going past zero (minutes to post). I noticed that they were bringing them out at three and then going past zero. So I started doing that. I started calling down to the paddock so that we could have our races going between Northfield and the Meadowlands. I would tell the paddock judge to hold them up. We had million-dollar nights when I was the PJ there.”

The drag is generally unpopular with the betting public, but it does provide positive results for track operators.

No track out handles the Big M, but why Northfield out bets Yonkers isn’t clear. It’s odd. Both are half-mile tracks. Neither track has an exceptional simulcast presence. Yonkers has the superior driver colony – arguably the top one in the game – and far superior purses, but Monday night, YR bet $459,575 (12 races) while Northfield wagered $882,889 (15 races).

Getting his fan base to bet the type of numbers Northfield does would confirm a job well done for Haughton, who revealed some of his other thoughts on increasing the wagering.

Like his many years in the press box as a judge, he’ll be watching the races like a vulture eyeing some tasty roadkill.

“I’ll tell you something right now,” said Haughton. “It’s not going to be qualifiers out there. When you finish fourth or fifth, you can still make a good living at this track. But that’s not going to fly with me.”

The New Year is almost upon us, and Haughton is revved for 2018, when he says, “I am going to hit it hard” when it comes to trying new things with the track’s graphics package. He said the Meadowlands does good things with their graphics and simulcast and he’s taken notice, to be sure.

Finally, like Northfield, Haughton would be receptive to carding more nine-horse fields, which the track does occasionally now (YR also likes to put 10 behind the gate in the Sunday afternoon trotting events that are simulcast globally) even though “My dad never liked leaving from the second tier.”

Haughton’s fire comes right through the phone. He is undeterred about the tough road that lies ahead.

“Look at our races and our drivers,” said Haughton. “These are the best guys in the country, but we just have to get it out there. It’s the same thing night after night. Bring the horses out, head to the gate and it’s over. We have to have some type of offense to move forward. We have to do something.

“I’m sure my dad is up there proud of me. Maybe we can get this thing turned around. I think it can be done.”

Spoken like a man who just might want to fit in a power nap every now and then.