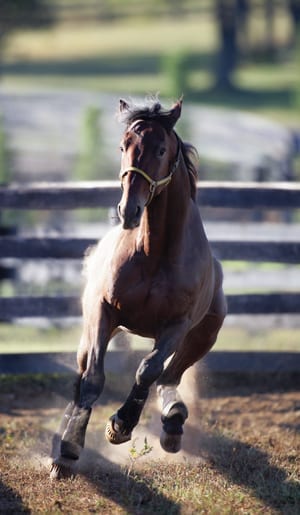 The production is slated for an exclusive debut on Atlantic Canadian cable channel EastLink early next spring, which will coincide with Somebeachsomewhere’s legendary three-year-old season.

A decade after his retirement to stud, Somebeachsomewhere is making a triumphant return — to television screens, in 2018.

Producer Dale Stevens and director Amanda Gallagher are making the as-yet untitled documentary for Clerisy Entertainment, a Dartmouth, NS-based media company founded in 2009, the year Somebeachsomewhere (p, 2,1:49.3s; 3,1:46.4m; $ 3,221,299) retired to stud. Specializing in documentaries and lifestyle programming, they were previously uninvolved with the racing industry. Yet Gallagher and Stevens recognized ongoing, crowd-pleasing appeal in how the Schooner Stable’s $40,000 yearling became one of the greatest pacers ever to look through a bridle, and are bringing that story to Atlantic Canadian TV (and beyond) in spring 2018.

The project began months ago, before it was announced Saturday that Somebeachsomewhere undergoing chemotherapy to battle cancer (see story pg 1).

Stevens said encountering a 2017 National Post story about Somebeachsomewhere’s breeding career and viewing an older EastLink television show on his success (“Some Horse”) provided motivation to revisit the achievements of the star pacer trained and owned, in part, by Truro, NS horseman Brent MacGrath.

“Honestly, I hadn’t really known about ‘Beach’ before starting the project,” Stevens admitted. “We like to do stories that we can shoot locally with Nova Scotians, and tell stories that relate to the broader international population. Normally, we have to struggle really hard to find stories that have interest for people outside of Canada or even outside of our own area; this one was checking all the boxes, right away.”

Stevens said Somebeachsomewhere’s dizzying rise to the top as a racehorse and sire makes the pacer’s career trajectory an engrossing one, even to viewers with no pre-existing knowledge of the sport: “It’s a Canadian story and it’s got this fantastic, do-it-yourself feel about it, where Brent went down south, bought the horse and trained it at Truro [Raceway].”

Gallagher also admitted to starting from scratch in learning about harness racing, after Stevens approached her to direct. The first track she ever set foot on was Red Mile, site of Beach’s 1:46.4 world record victory in his 2008 Bluegrass Stake division, which she visited in the early stages of making the new documentary. “I read about 300 articles about Beach and I started getting really into this story, as an animal story, but also as an athletic story,” she says. “His athleticism was exceptional. I think there’s a small-town hero story there, too, training out of Truro in the dead of winter.” The director adds that the mainstream media attention the Ontario-bred pacer drew on both sides of the border captured her attention.

While many Nova Scotians have a background or family connection to harness racing, this is not the case for the 48-year-old Stevens or 32-year-old Gallagher. Their interest in making the film originates from the unique improbability of Somebeachsomewhere’s career, which still resonates outside harness racing circles. “We’re still in production right now, planning people we need to interview,” advised Gallagher, who has been consulting with MacGrath and Truro Raceway staff about the project. The timing of the film was in conjunction with a specific event in Somebeachsomewhere’s life: “It all started at the Lexington sale—we did go down there for this year’s sale” to begin shooting footage for the documentary.

Next in the film’s production schedule is visiting the Ontario tracks where Beach gained early prominence, and his current base of Hanover Shoe Farms in Pennsylvania.

The one-hour documentary was recently approved for $97,058 in funding from the Nova Scotia Film and Television Production Incentive Fund. Gallagher said it will be much more than a retelling of Somebeachsomewhere’s on-track exploits: “We’ve been at Truro Raceway, doing some tests to shoot racing from many different angles, really getting in the mix, mounting cameras on the sulkies and trying out cool, re-enactment-type things to show racing from a different perspective… Capturing his essence and the mood he would create around him — that’s important to me.”

Slated for an exclusive debut on Atlantic Canadian cable channel EastLink early next spring, there are plans for later distribution in the U.S. and Europe, plus online availability in future. The exact release dates will be announced once the project nears completion, said Stevens.

Learning about race strategy and Somebeachsomewhere’s uncanny ability from MacGrath was eye-opening, said Stevens. “Hearing Brent talk about the horse and racing in general gave me a whole different appreciation for it. The things that he looks for… I never thought of it in that regard before.” The producer says that there was no specific plan to use the upcoming film as a promotional tool for harness racing or Somebeachsomewhere himself, although bringing the stallion and the sport back into the spotlight, adding fresh angles to archival footage, may indirectly serve that function: “I do hope we are that bridge to bringing some new people in, that this might pique their interest.”