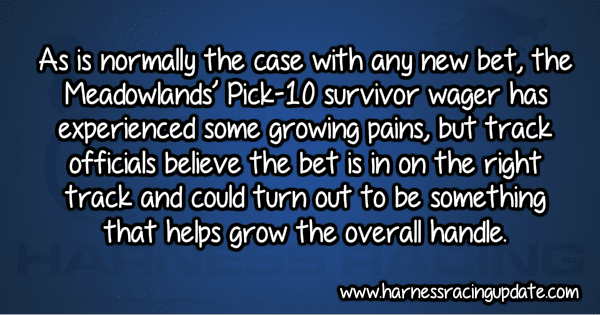 Though the bet had a bit of a slow start, gains were made in the second week that has track GM/COO Jason Settlemoir optimistic the unique wager will continue to grow.

As is normally the case with any new bet, the Meadowlands’ Pick-10 survivor wager has experienced some growing pains, but track officials believe the bet is in on the right track and could turn out to be something that helps grow the overall handle.

“I think this wager has an opportunity to become something big going forward,” Meadowlands GM/COO Jason Settlemoir said.

The bet, which was devised by owner, breeder and entrepreneur Eric Cherry, is exactly as advertised. It is a battle of survival and the last horseplayer or horseplayers left standing win the pot. The bet is sold in 20-cent increments and a player advances to the next race only if he or she selects the winner of the previous race. The bet is paid out only after no one is left with a live ticket or after the 10th race. The wager starts on the first race on the card.

The results were much better for Week 2. Management moved the Pick 5 and its two Pick 4 wagers back a race to lessen the cannibalization effects, and that clearly helped. The survivor pool grew to $16,231, an increase of almost 40 per cent. The Pick 5 pool also rebounded with a total pot of $40,325.

“(Meadowlands owner) Jeff (Gural) and I both were kind of worried going into that first night that these bets might trip over one another and that’s what happened,” Settlemoir said. “After we saw what happened the first night we decided to move the wagers around and I think that helped us and the horseplayers, as well.”

The way the bet played out was also much more in line with what the Meadowlands had been hoping for. No one gets too excited when going after a jackpot style bet and coming away with $298.66. On Week 2, one player and one player only survived all 10 races and was rewarded with a payoff of $13,751. The winning ticket was purchased through Twin Spires and the player spent just $72.

“I don’t think the way things played out the first week discouraged anybody,” Settlemoir said. “They came back the next week, bet more and the wager produced exactly what it can do. We sent somebody home with $13,751. The wager worked the second week fully the way we were hoping it would work.”

The idea now is to keep the handle growing. Settlemoir said there are no immediate plans to do any major overhauls of the format or change the cost of the bet. He believes the handle will grow each week through word of mouth and with players becoming more comfortable with what strategies work and don’t work. He also said the Meadowlands team will put more emphasis into promoting the Pick-10 survivor and keeping fans update throughout the night on how the wager is playing out.

“One of the things we are focused on now is how to present this wager better from a television standpoint.” he said. “Our graphics people, the team at International Sound and others are working on new graphics packages that hopefully we’ll be able to roll out this week. We’d like to have a running ticker that’s going to show how many tickets are alive going into the next race and who the horses are that are alive after each leg and how much is on each one of those horses. At the end of it, we want something that is esthetically pleasing that says congratulations to the winning ticket holder and announcing how much they won.”

With $16,231 the highest amount wagered on Pick-10 survivor so far, there’s a lot of room for growth, and Settlemoir believes that’s exactly what is going to happen.

“Considering how much this increased from the first week to the second, I wouldn’t be surprised if we didn’t see the pool double from its current amount by the end of the year,” he said. “I think we’ll see it rival the amount we see each week in our Pick 4 bets. I want to see this grow week after week to the point where we offer the possibility of a life-changing bet to someone. That’s our goal and I think it will happen. I know I’m a glass-is-half-full guy, but I’m extremely happy with the way this bet has started out and I believe it’s only going to get a lot better.”