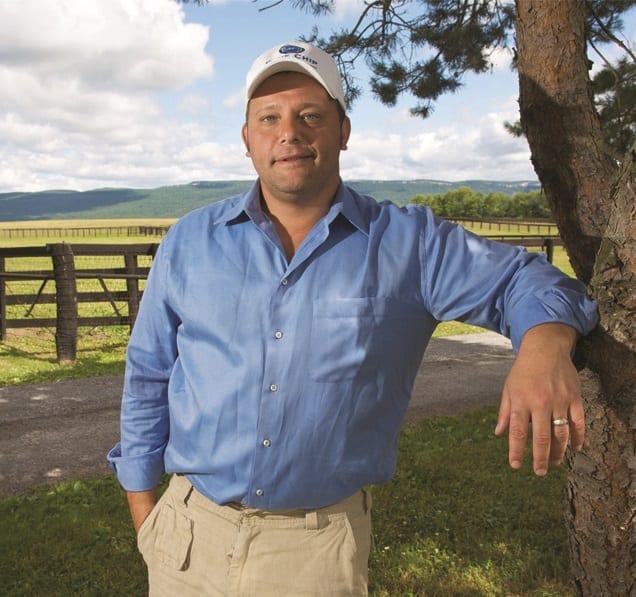 A couple of unique strategies paid off big for the Wallkill, NY farm Tuesday on day two of the Harrisburg yearling sale. Through two days of the three-day sale, the average of $52,555 and the gross of $25.3 million is about even with last year’s sale.

Blue Chip Farm owner Tom Grossman was certainly pleased to sell the session topper and over $1 million worth of horses Tuesday on day two of three of the 79th Standardbred Horse Sales Company’s yearling sale at the Pennsylvania Farm Show Complex in Harrisburg, PA, but he was even more pleased for his staff — notably Rob Rogers.

“To see him just beaming as he came back to the consignment, that makes it all worth it,” Grossman said, explaining that Rogers had both $180,000 session-topper Quatrain Blue Chip and $150,000 Quarter Blue Chip in the farm’s groom draft.

“We have a great thing where all the grooms draft their own yearlings when they come in… They have a contest for who gets the best average,” Grossman said.

“You should see the amount of homework they do and the pressure in the draw and just the joy when they bring one back,” Grossman said. “They are all sneaking around the yearling fields all year and they really compete… They take it so personally and they have expectations. It’s one of the best things we’ve ever done.”

Grossman said it’s extra special to see Rogers have a strong shot to win the
draft.

“Rob Rogers was practically born at the farm… His father has foaled out mares at the farm for 30 years, maybe longer.”

Session-topper Quatrain Blue Chip is a Somebeachsomewhere colt out of Frontierpan that sold to Mac Nichol of Burlington, ON. Team Allard of Matamoras, PA paid $150,000 for Shadow Play—Michelles Song filly Quarter Blue Chip, the fourth highest priced yearlings of the day.

The sale of at least Quatrain Blue Chip was the result of another Blue Chip incentive that Grossman said is paying dividends. He said for the last seven or eight years the farm has rented a private plane to pick up potential Canadian buyers and fly them to the Wallkill, NY farm for a yearling scouting trip. It was on this year’s trip that trainer Casie Coleman spotted Quatrain Blue Chip.

“It’s really grown our business and built nice relationships where you can spend a whole day with Casie Coleman, instead of just bumping into her when she’s busy or whatever,” Grossman said of the private plane. “That’s a $20,000 or $30,000 a year investment, but it comes back today.”

Coleman said Quatrain Blue Chip is, “absolutely gorgeous. I haven’t had that many Beach colts, and obviously Beach is doing an unreal job. This colt is just really racy and athletic. Tom Grossman flew us out to the farm back maybe a month ago or so. I saw (Quatrain Blue Chip) then, loved him at the farm, absolutely loved him, and told my owners about him. I didn’t think we’d have to pay quite that much money for him, but, right now, if you want a nice-looking horse, well-bred, especially a Beach, you’ve got to pay.”

Nichol, who has had different partners on horses, said he was leaning toward owning Quatrain Blue Chip himself. Coleman will train the colt.

“This one I bought on my own. I do that sometimes if (partners) don’t want to go that high. If I really like it, I’ll go for it,” Nichol said, adding Quatrain Blue Chip “looked the part and is well put together. He looked great on the video, everything about him. We’ve been waiting all week for him.”

“We’re within $160,000 of last year and we sold 483 this year as opposed to 479,” said Standardbred Horse Sales Company president and CEO Pete Spears. “We made up virtually everything that we were down yesterday and it’s basically dead even with last year. After the way things started a little slow yesterday, I think we’re doing very well.”

After the opening session, which was off 4.3 per cent in average, Spears said he was confused why the pacing colts as a group were off a little as a group compared to other years, but both he and sale vice-president Russell Williams said they were pleased to make up lost ground on day two.

“We are catching up with last year,” Williams said. “It was a very upbeat day. First of all, just anecdotally, the people who have come through here are calm and pleased with their purchases. There’s no handwringing, like, should-I-have-done-this-type-of thing. People are very upbeat.”

Spears said most people he spoke with told him, “You’ve had a good, solid sale today.’ There have been very few rough spots and low points, so it’s just kind of been purring along all the way through. I think that’s a pretty good assessment.”

Despite having just two yearlings sell Tuesday, superstar trotting stallion Muscle Hill continued to dominate the sire averages through two days with an average of $133,739 for 23 sold, but his pacing rival Somebeachsomewhere had a strong second day to pull ahead in the race as ranked by gross — though he has sold 23 more yearlings than Muscle Hill. Somebeachsomewhere now has grossed $3,437,000 for 46 yearlings for an average of $74,717.

Trainer Marcus Melander signed the ticket for the second highest priced yearling of the day on behalf of Courant Inc. of Delray Beach, FL when he placed the winning bid of $170,000 for Chapter Seven—Steamy Windows colt Army Of Monkeys sold by Concord Stud Farm, Agent.

“He’s a Chapter Seven and there’s not that many in this sale and that’s why he got so expensive,” Melander said. “I like the Chapter Sevens a lot. I had Enterprise this year and Fourth Dimension. This one, I was very happy with how he was standing and everything about him.”

Crawford Farms of Syracuse, NY bought the third highest priced yearling of the day and is third on the leading buyers’ list through two days with $569,000 spent on five yearlings. Burke Racing Stable LLC leads all buyers with $989,000 in purchases for 15 yearlings, followed by Ake Svanstedt at $660,000 for six yearlings.

Crawford spent $160,000 to purchase Shake First, an American Ideal colt out of Shake That Junk from the Fair Winds Farm, Inc. consignment. It should be noted that Fair Winds leads all consignors with a $102,875 average for 16 sold.

Michelle Crawford told Harness Racing Communications’ Ken Weingartner that she wasn’t intending to bid on Shake First, but “we have the sister, Cult Status, and we have Split The House. I couldn’t help it. I went and pulled (Shake First) out. I loved his tape from the get-go, so I always had in my mind we would get him, but we purchased so many that we didn’t need another pacing colt for New York. I brought my husband over and that was it. I think we are well positioned to have some success next year, I hope. I think we’ve been upping our game as far as pedigrees and what we’re buying. We have a good start, I think, from Lexington and our homebreds. It’s exciting.”

Now that the sale has essentially drawn even with last year’s results through two days, Spears said he’s expecting good things from today’s third and final yearling session that starts at 10 a.m. That’s because he made a concerted effort to trim some 80 or 90 of the lower-end horses off the sale roster this year, instead pointing those horses toward the Goshen Yearling Sale.

“I cut 80 to 90 yearlings off the bottom,” Spears said. “We had more entries than usual, but we’ve kind of changed our focus now that the Goshen sale has been successful. There is another venue that’s appropriate for those yearlings, so we’ve been a little harder on the bottom end.”

Williams pointed at Spears and said, “This guy was very tough on letting yearlings in.”

“The differences ought to really show up (Wednesday),” Spears said. “Traditionally, it’s the lightest of the three days. So, I think we’re looking at a good day again (Wednesday) and there’s still a lot of people who need horses.”