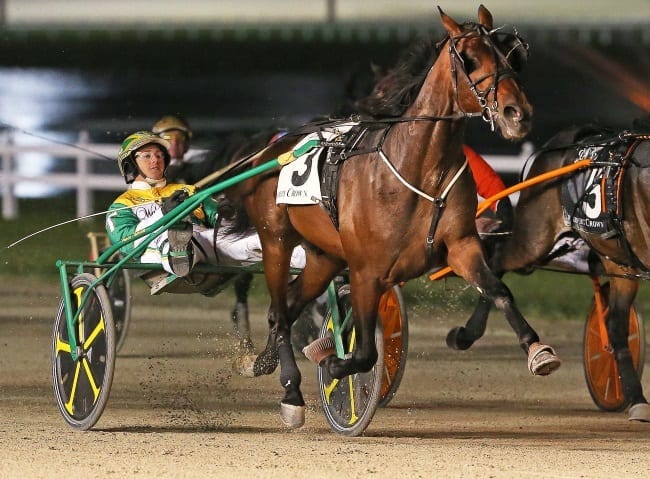 The Indiana-bred starred at his hometown track and provided a signature win for the Indiana harness racing and breeding program.

Owner John Barnard and trainer William Crone had never been directly associated with a Breeders Crown horse prior to Fiftydallarbill, and now they are Breeders Crown champions. Fiftydallarbill (Swan For All—CR Dixie Chick) provided a win that not only puts its small-time connections on the map, but that will make the industry take note of the flourishing Indiana breeding program.

The significance of the win can’t be understated with the Indiana-sired colt bred by John Miller of Syracuse, IN winning a Breeders Crown at the Indiana track playing host to the event for the first time. In addition to winning for the midwestern connections, Fiftydallarbill was also guided home by Hoosier Park’s leading driver Trace Tetrick.

If the names of Barnard and Crone sound familiar, it’s because of their relation to the one of the feel-good stories from earlier this decade, St. Elmo Hero. And in a way, St. Elmo Hero led the two men to this Breeders Crown win.

“I came out of Illinois. I’ve only been with standardbreds since 2004 and I’ve been totally blessed,” Barnard said. “St. Elmo Hero, an Indiana-bred who won 25 in a row when we claimed him; that’s the reason that brought me to Indiana.”

In a somewhat twist of irony, Tim Tetrick drove St. Elmo Hero through his winning streak in 2011 and now it was Tim’s younger brother, Trace, who drove the lesser known (but no less classy) Fiftydallarbill to a Breeders Crown Saturday in the $600,000 division for two-year-old trotting colts. This was Barnard’s first Breeders Crown appearance.

“We spent a lot of money this year staking horses and I said we’ve got to win one to get our money back,” Barnard said laughing. “This is a great program here in Indiana. I came out of Illinois. My intent was to go down to Florida and maybe race down there, but I really got more involved in the Indiana program in the last couple of years.”

As for the race, its complexion was altered some at the start when one of the main contenders You Know You Do broke stride. Met’s Hall was then the first to show the way as driver Andy Miller put the Cantab Hall colt right on the point from post 5 and took the field through an opening quarter of :27.3. After longshot Samo Different Day was able to secure the pocket from an outside post, Dave Miller quarter moved to the lead in between calls with Crystal Fashion.

Meanwhile, Fiftydallarbill was sitting comfortably off the pace.

“You know, the colt was really good tonight,” Trace said. “He was really confident getting out of the gate; sometimes he’s a little nervous behind the gate and throws in a step or two. So I just wanted to get out of there. Once we settled he was one-two-three-four today; he was really good.

Following a half mile that was rated in :57, the heavy 50-cents-on-the-dollar favorite Fourth Dimension and Brian Sears made a first-over move at the five eighths and picking up the favorite’s cover was Fiftydallarbill with Trace Tetrick. Fourth Dimension came up empty into the stretch but he did all that Fiftydallarbill needed him to by towing him into a perfect striking spot.

At this point in the mile, Trace was liking his chances. “The last turn is a little sharp at times, so I moved a little early just to make sure nothing happened. He’s made that move before and he’s always been really good about it. Then, the top of the stretch and in, he’s as solid as can be and trots right to the wire.”

With both Fourth Dimension and Crystal Fashion giving way on the lead and then breaking, Fiftydallarbill surged off the second over cover at odds of 7-1 and held sway late through the lane to hold off a closing Met’s Hall up the inside for a career tying best mile of 1:55. Samo Different Day (40-1) just missed second in a photo finish and 106-1 bomb Skyway Torpedo (also by Indiana-sired Swan For All) was fourth, triggering a massive $12,963 superfecta payout.

The win was a redemption of sorts for Fiftydallarbill who broke two starts back when well backed in the rich $225,000 Indiana Sire Stakes super final.

“He never had the 10-hole before. He didn’t like it and made a break, but he came back and gained a lot of ground,” Crone said.

“He spotted them 25 lengths and if he didn’t break, he wins for fun,” Barnard added. “So, I felt that he showed us enough in that race (to move forward).”

There would be no such issue in his Breeders Crown final. While the race featured many blue-blooded and six-figure yearlings, Fiftydallarbill cost a modest $16,000 when purchased last year out of the Hoosier Classic Yearling sale. He is the eighth foal out of CR Dixie Chick who herself is a full sibling to Dan Patch award winner CR Commando.

It was the breeding that owner Barnard liked most about the colt as a baby.

“I work with other people and we go through the books and try to rate the yearlings,” Barnard said. “It comes down to the price, $16,000 for this horse. Swan For All – they look like racehorses and that’s the reason I bought him. They look like what at trotter should look like. We bought a few. I’ve got four shares in Swan right now. I’m breeding mares to him and if I see the right none, I’ll buy it.”

An astute investment as it looks as if those shares might be worth even more now.