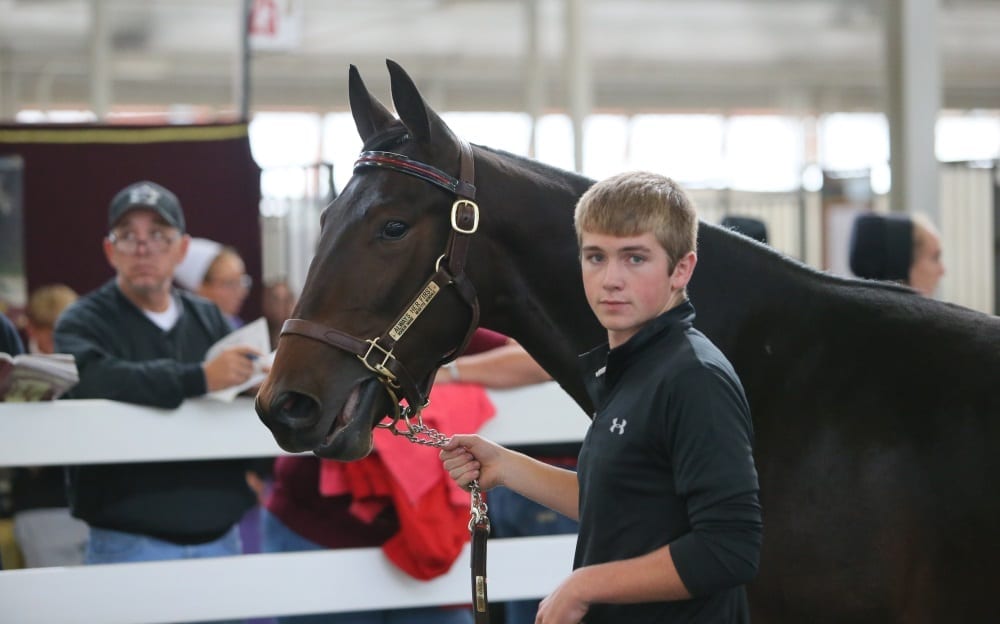 Hoosier Classic sale up 17 per cent in average

Sale manager Steve Cross said it was the best sale yet, as Rockin Image filly sets an all-time sale record with a bid of $145,000.

The Hoosier Classic Sale Company closed out its 2017 Select Yearling Sale on Saturday with another strong session. The back half of the catalog was nearly as strong as the first session, producing the two highest-priced babies of the sale.

Newport Party, a Rockin Image filly consigned by Legacy Lane Farm, was hammered down for a record $145,000. Cataloged as Hip 236, the filly is out of Hall of Fame broodmare Fox Valley Monika, dam of millionaire Glass Pack. Bo DeLong, one of the sale’s most active buyers, signed the ticket.

Sunday Clothes, a Rockin Image brother to top Indiana sophomore Beckhams Z Tam, brought the next highest bid. The colt, out of the Electric Yankee mare Sara’s Lucky Charm, was purchased by Anthony Lombardi for $125,000. The pacer, Hip 296 in the catalog, was consigned by In Law Stables of Topeka, IN.

Those two yearlings highlighted a second session where 173 yearlings grossed $3.18 million, signaling an average of $18,387. When combining the two days, Hoosier Classic sold 355 yearlings for $6.93 million. A two-day average of $19,527 resulted in an increase of more than 17 per cent compared to 2016 business levels.

The top trotter of the session was again from the newest crop of Swan For All. This time it was Hip 299, a Swan For All filly from consignor Meadow Brook Farm. A first foal from Kadabra mare Seeking A Dream, the trotter was purchased by William Rufenacht, serving as agent, for $65,000.

Swan For All yearlings continued to be highly sought after at the Hoosier Classic sale. With 38 passing through the ring over the two days, the sire’s progeny averaged $36,737. A total of 10 yearlings sold for $50,000 or more. On the pacing side, Rockin Image again set the pace. With 63 babies selling during the two sessions, the son of Rocknroll Hanover grossed sales of $1.87 million, producing an average of $29,754.

“Once again the breeders were rewarded for their diligence and foresight in buying quality mares and breeding to marketable stallions,” said sale manager Steve Cross. “Hoosier Classic would like to thank the consignors, bidders and buyers for making this year’s sale our best yet.”