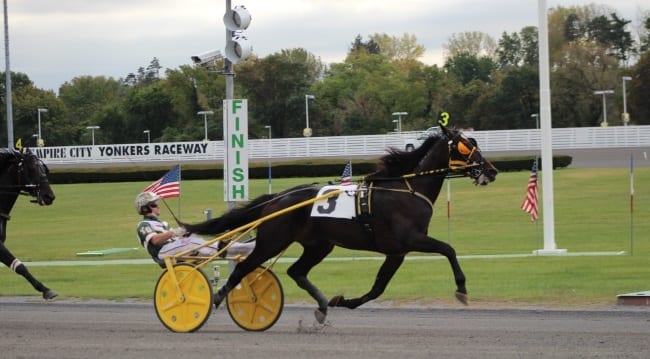 For Yonkers and Burke an International silver lining

Yonkers officials were pleased with a handle that was up almost 20 per cent from last year — with international betting figures still to be counted — and trainer Ron Burke was happy to win the two invitational events on the undercard.

Yonkers International Trot Day Saturday at Yonkers Raceway brought cloudy skies. But for harness racing fans, that was the only gloomy thing in sight.

$3.3 million in purses. Competitive racing. Eleven races. Stakes races. Sire stakes races. Old faces. New faces. People from foreign places. On this day, Yonkers was the center of the harness racing universe. And the boss was happy with what he saw.

“I thought it was fantastic,” said track vice president and chief operating officer Bob Galterio. “That horse (Twister Bi) set a world record (in the Yonkers International Trot). He looks like the world champion. I can’t wait to see how he does in his next few races and goes up against Bold Eagle. This horse just keeps getting better and better. He is really going to give Bold Eagle a run for his money.”

The on-track experience was one rarely seen these days at the Hilltop. “The crowd was good. The excitement level was high. Our handle ($1.1 million) doesn’t count what was bet in Sweden and Australia, and still was up almost 20 per cent from last year. I’m one of those guys that thinks up is good. Is the handle where it should be? No. But up is good. Next year, if we are up again, that’ll be good. So I’m happy with it.”

With this year’s International only the third since the rebirth of the event, and given how much money Yonkers spent to entertain their foreign visitors during the week, what is the thinking that goes into whether the event continues?

“Eventually, handle is going to be an indicator if we are going to move forward,” said Galterio. “But right now, we are still trying to develop this relationship with the world so that they’ll be interested in accepting our racing simulcast and I don’t think this is the time to decide if this day was a success or not based on handle because I think this day was a big success. I’m not the sole decision maker in terms of next year, but I’m looking forward to another edition of the Yonkers International Trot.”

On the International Trot undercard, Ron Burke pulled off a training double in the $250,000 invitational events, sweeping the Dan Rooney Pace (with All Bets Off) and Harry Harvey Trot (Crazy Wow).

In what turned out to be the most exciting race all day, All Bets Off gunned down Keystone Velocity at the wire to eke out a nose win in the Rooney.

The battle was on early as 2-1 favorite Sintra, Somewhere in L A and Bit Of A Legend N all fired away from the gate, with Bit Of A Legend N, under strong handling from Jordan Stratton, able to get a nose up while parked past the quarter in :26.4.

Pressure came soon after he settled on the point from Somewhere In L A, as Bit Of A Legend N clung to a half-length lead at the half (:55.2). The pack was as tight as a rush-hour subway car as they moved past the five-eighths with the top two continuing to slug it out, Sintra in the pocket, Keystone Velocity three wide and All Bets Off second over in the three-wide flow starting to make his presence felt as they hit three-quarters in 1:23.1.

At the head of the stretch, Keystone Velocity was in high gear as he passed the tiring top two, but so too was All Bets Off (Matt Kakaley driving), who was flying in the final sixteenth to get up on the wire in 1:51.4. Missile J rallied for third. The winner returned $8.00 to his backers as the second choice in the wagering.

“He’s been really good for a while now. He’s been racing great,” said Burke. “Last week, he had the 10 hole at Lexington. There’s no way you’re going to pass horses from that spot. He rounds into form at the end of the year. He gets good as the year goes on. I’m hoping he ends up the year as the Aged Pacer of the Year. I think he has as good a chance as anybody. And no matter what he did, he was going to the Breeders Crown (October 28 at Hoosier Park).”

The Harvey was easily the day’s least interestingly raced race. And that was no doubt fine with Burke.

Crazy Wow was put on the lead early by driver Yannick Gingras and led at every call for the marathon distance of a mile and a quarter on the way to an easy half-length win over Lookslikeachpndale, who was second from start to finish. Dia Monde was third. The winner paid $5.00 as the public choice and completed the mile and a quarter in 2:25.

“You know, the way it shook out,” said Burke. “Georgie (Brennan, driving Dia Monde) got roughed up to get in the three hole, and then you had an average horse sitting fourth. So now you’re going to have a horse that been roughed up going first up or a horse that’s maybe not as good as some of the other ones first up. So you’re going to get a rest, and Crazy Wow is a fast horse. I didn’t know if the mile and a quarter would catch up to him. He’s probably better in a mile race only. But I think he’s rounding back into form. We figured out some things with him and I think he’s going to finish the year up strong.”