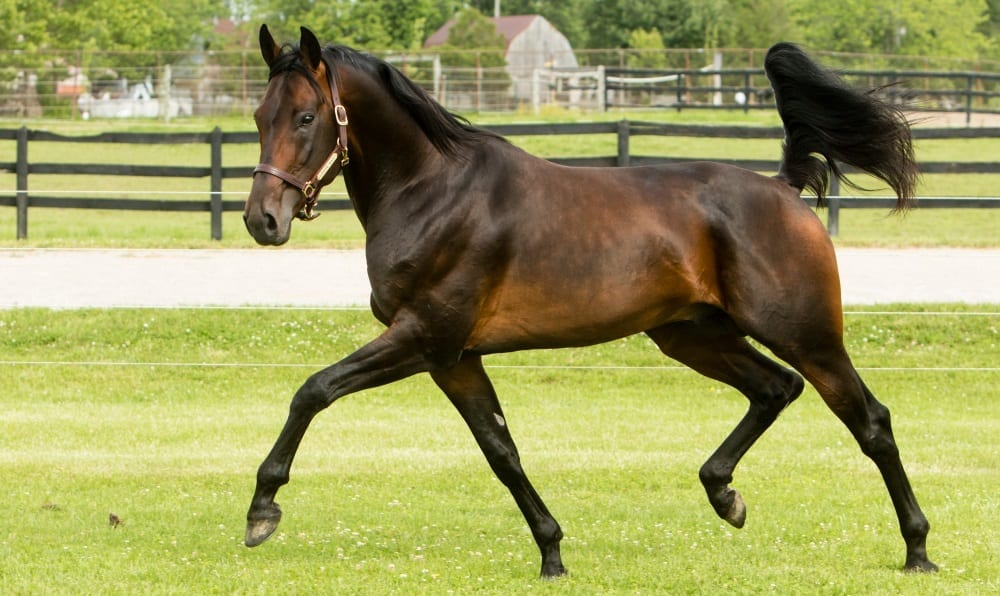 An analysis of how the stallions fared at the Lexington Selected Yearling Sale.

Somebeachsomewhere, who was front and center this year with sophomore standouts Downbytheseaside and Huntsville, actually saw his average drop 16 per cent while selling 10 fewer yearlings. Still, the 29 sold averaged $103,448. He’s up 17 per cent since 2015. Did the drop have anything to do with the introduction of his son Captaintreacherous and Sweet Lou? There will be 24 colts and 23 fillies by SBSW to choose from at Harrisburg.

Chapter Seven, the sire of star-crossed Walner, Fourth Dimension, Swell Chap and Alarm Detector, saw his average rise by 18.6 per cent to $65,083 on a dozen sold — half as many as last year. Three fillies beat $100,000 while seven all told, or 78 per cent, topped $50,000. All but one brought at least $25,000. One colt was an RNA, so only three were sold. This crop consists of 49 registered foals, down from 71 last year. Chapter Seven, who stands in New York for $7,500, is currently number one among 3-year-olds and second among 2-year-olds in the NYSS. Twenty-three will sell at Harrisburg.

Cantab Hall, the sire of first crop stallions Father Patrick and Uncle Peter, continued to be very consistent at the Lexington sale. His average dropped 5 per cent to $64,167. A half-sister to Peter Haughton winner You Know You Do brought $300,000, while a sister to Barn Doll brought $200,000. Seven, or 17 per cent, sold for at least $100,000, while almost half beat $50,000. Muscle Hill keeps drawing off from Cantab Hall at Lexington. In 2015, the former’s average topped Cantab’s by $28,000; this year he fell more than $51,000 behind Muscle Hill. Nineteen colts and 24 fillies are slated to sell in Pennsylvania.

American Ideal, the sire of Casual Cool, Funknwaffles and Hitman Hill, saw his average rise by four per cent to $50,300 on the sale of 20 yearlings — a dozen fewer than last year. Crawford Farms paid $150,000 for a colt, while their trainer Chris Oakes paid $170,000 for another. Forty per cent topped $50,000 and 80 per cent brought at least $25,000. The very consistent son of Western Ideal is the leader among both two and three-year-olds in the New York Sires Stakes (NYSS) and is number three on the all-age pacing sire money list. He’ll sell 20 colts and 17 fillies in Harrisburg.

After being up 24 per cent last year in Lexington, Bettor’s Delight dropped 28 per cent on nine fewer sold. He sold 20 for a $40,000 average. Last year’s group was eligible to the Pennsylvania Sires Stakes (PASS), while these are Ontario-sired. PA champ Caviart Ally won the Jugette and a split of the Bluegrass. Bettors Up won the Fan Hanover and Simcoe, but there was no Betting Line in the ranks this year. Only one Bettor’s Delight offspring topped $100,000 at Lexington; six, or 30 per cent, beat $50,000; and 11, or 55 per cent, topped $25,000. Last year, there were three above $100,000, 55 per cent beat $50,000 and 80 per cent topped $25,000. Bettor’s Delight is second behind SBSW on the all-age pacer earnings list. Fifty more sell in Pennsylvania.

E L Titan (Muscle Hill), who is now standing in New York for $6,000, but is selling Ontario crops this year and next, averaged an eye-opening $79,833 for a half-dozen sold. Jimmy Takter paid $145,000 for a colt out of Christiana Hanover.

Muscle Mass continues to impress, both on the track and at the sales. The paternal brother of Muscle Hill, who is back in Canada but selling this crop for the NYSS market, saw his average rise a stunning 55 per cent from last year. Only eight were offered — half as many as in 2016 — but they averaged $72,125. He’s up 62 per cent since 2014. Ten more sell at Harrisburg.

Muscle Mass’s younger brother Muscle Massive, who won the Hambletonian and out-earned him by about a million dollars, averaged $18,364 for 11 sold. His son Snowstorm Hanover was a surprise winner of the Kentucky Futurity. He’ll sell 39 in Harrisburg.

Sportswriter sold eight more than he did in 2016 and his average dropped 33 per cent to $36,706. The number one pacing stallion in the OSS going into the Super Finals is down 38 per cent in Lexington since 2014. Thirty-one more will be introduced at Harrisburg.

Shadow Play the sire of Kendall Seelster and Percy Bluechip, only sold six, after selling five in 2016. His average fell 43 per cent. Fifteen will sell in Pennsylvania.

Archangel, who has no 2-year-old crop since he raced in 2014, is number two on the NYSS sophomore money list, thanks to the likes of Guardian Angel AS, Top Flight Angel and Celebrity Ruth. He sold five Ontario breds for a $51,600 average. Another small contingent of six colts appear in the Harrisburg catalogue.

Hambletonian winner Royalty For Life sold six from his first crop for a promising $51,167 average. Another dozen will sell at Harrisburg.

Conway Hall sold nine for a $41,889 average, which was down 33 per cent. The sire of Barn Bella, who is number three on the NYSS sophomore list, will sell a dozen at Harrisburg.

Donato Hanover, who sold 19 for a $37,263 average, was down seven per cent. He’s been very consistent in Lexington the past three years, right around $40,000. He’ll be offering 33 more in Pennsylvania.

Betterthancheddar dropped 16 per cent from last year, when he introduced his first crop in Lexington. That crop was New York eligible, where he’s number four on the NYSS 2-year-old list, but this one is Ontario eligible. He sold eight last year and six this year (one was an RNA). Eight more are up for grabs in Harrisburg.

Well Said’s average rose 20 per cent to $29,333 on nine sold. He sold twice as many in 2016. The sire of Boogie Shuffle has no Control The Moment this year. Twenty-seven colts and 15 fillies will sell in Pennsylvania.

Roll With Joe only sold five, down from nine in 2016. He’s down 44 per cent since 2015. Miso Fast generated interest, but Racing Hill is missed. Nineteen sell at Harrisburg.