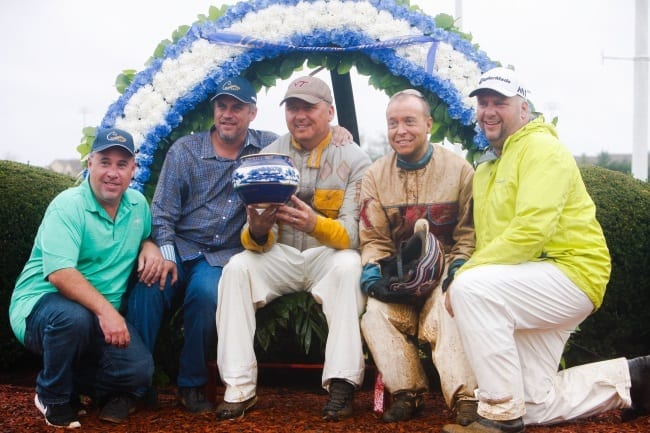 Snowstorm in a Rainstorm

Snowstorm Hanover pulled off the upset in the 125th Kentucky Futurity for the Burke Brigade in less-than-ideal conditions Sunday afternoon at Red Mile.

I’ve had the pleasure of seeing the last 54 Kentucky Futurities without interruption and I’m hard pressed to recall one that was contested under such adverse circumstances.

Rain pelted the Bluegrass overnight on Saturday and continued during Sunday with varying intensity.

The rain may have been a key to the colt’s victory.

“I can’t believe it,” said Kakaley after the race. “If you’d told me I’d be standing in the winner’s circle today, I would’ve said you’re crazy.”

The cool and wet fall day proved to be a blessing for the son of Muscle Massive—Snow Angel Hanover, a Hanover Shoe Farms stallion.

“He’s not that good in the hot weather,” said Kakaley after the race. “He’s better when it’s cooler.”

Track supervisor Greg Coon was facing a Mission Impossible task as the day began, but he’s faced these dilemmas many times in the past. The historic oval was stripped of some of its cushion and you could hear the hoofbeats ringing as horses pounded down the stretch, but Coon and his crew presented horsemen with a safe surface.

The rains caused the patrons to seek refuge in the grandstand and reminded some of the adverse circumstances under which Creatine won the Kentucky Futurity in 2013.

International Moni and What The Hill took the two Kentucky Futurity eliminations.

In winning, International Moni powered past early pacesetter Giveitgasandgo just past the half, then held off the fast-closing Snowstorm Hanover in a 1:53.4 mile.

That heat gave Kakaley hope coming into the final with Snowstorm Hanover.

“I was really confident after the way he finished that elimination heat,” he said. “He’s got the ability. He’s a real good horse when he shows up, but he doesn’t show up every start. I think it’s related to the weather.”

In the final heat, Kakaley had the confidence to keep Snowstorm well off the pace, then he took dead aim on Devious Man who seemed to have the Kentucky Futurity won with a hundred yards left.

“Snowstorm battled right to the wire,” said Kakaley, “but I actually wasn’t sure he’d won until I came back after the race.”

He won by a head over Devious Man with Lindy The Great third. The 3-2 favorite International Moni broke stride before the start and finished last. The winning time was 1:53.2.

It was expected to be business as usual for Ariana G in the distaff division of the Kentucky Futurity. Many observers think she can beat the best sophomore colts, so dominating her playmates in the filly events is supposed to be a walk in the park for her. But there is a reason that they give the trophy after the race and not before it, because Ariana G went down to defeat.

After winning her elimination easily, in the final Ariana G put away the other elimination winner Dream Together in the stretch. She looked to be a confident winner, but began to flag her tail. Driver Yannick Gingras tapped her to remind her that the race wasn’t over.

Coming strongest before the wire was Ice Attraction and trainer/driver Ake Svanstedt. She thrust her nose in front at the last possible moment to capture the prestigious stake.

Ice Attraction was sent off a 29-1 by bettors and scored her fifth win in 16 starts for 2017. She topped a superfecta for the supersire Muscle Hill as he sired the first four finishers: Ice Attraction, Ariana G, Dream Together, and Dream Baby Dream.

Harness industry leader Jeff Gural is one of the owners of Ice Attraction and admitted that he was virtually speechless with this longshot winner.

“I knew that Ake had been high on this filly for quite some time,” said Gural, “but in the stretch I was just hoping she might get up for second. Then she won it!”
Gural shares ownership in the filly with Mal and Janet Burroughs, Douglas Sipple, and trainer Svanstedt.

Ice Attraction was bred by Stephen P Day and David Reid and she was a $65,000 yearling at Harrisburg in 2015. She had won only four times this season in 15 tries coming in the Futurity Filly final this year. She had won last week at Red Mile at 10-1 odds, again by a nose, but only placed third in her elimination heat for the Filly Futurity final.

Mike’s Z Tam and Fear The Dragon in Tattersalls

In the opening divisions of the Tattersalls, the 3-5 favorite Downbytheseaside had everything his way as he eased to the front after a soft opening panel in :29.2. He paced a pedestrian half of 57 seconds. It seemed like no contest for the favorite in both heats of the Little Brown Jug, but he drifted out entering the stretch and was no match for the frantic late attacks from Mike’s Z Tam and Miso Fast who finished together in the middle of the track.

It was the second straight win for the gelded sophomore son of Bettor’s Delight—Ideal Observation as he scored a similar come-from-behind victory the first week in Lexington.

Fear The Dragon made amends for his disappointing fourth-place finish in the recent Little Brown Jug final by swinging wide in the stretch and doggedly wearing the leaders down to take the second split of the Tattersalls Pace in 1:51.2. Driver David Miller had him well off the early pace set by Art Scene, then moved third-over into the cover flow. Once he got straightened out in the stretch and had clear sailing, Fear The Dragon’s determination was obvious as he drew a bead on the leaders and made sure he found the wire first. He had a half-length margin.

He now has a dozen wins in 15 starts this season and his earnings for the season now exceed $1.25 million.

Fear The Dragon nosed out Mac’s Jackpot with Jug winner Filibuster Hanover holding for third in the stretch battle. He is owned by Emerald Highlands Farm of Mount Vernon, Ohio. Brian Brown trains.

Idylic Beach waited until deep stretch to engage and pass the pacesetters to cop the $234,000 Glen Garnsey Memorial for sophomore pacing lasses.

In doing so she pushed her career earnings past $1 million for owners Chistina Takter, John Fielding, Brixton Medical, and Marvin Katz. Jimmy Takter trains the daughter of Somebeachsomewhere—Idyllic and Yannick Gingras was in the bike.

Caviart Ally left alertly from post nine to grab the racetrack in a modest opening panel of 28 seconds with Jaye’s A Lady sitting in the pocket. Tequila Monday moved at the 3/8-mile pole to take control and led into the stretch before the pace began to extract a toll.

Then Idyllic Beach loomed into contention on the outside as Jaye’s A Lady moved to the inside. The trio of fillies fought to the wire with Idyllic getting their first by two lengths over Caviart Ally and Jaye’s A Lady. Blazing Britches recovered from a break before the start to make up an incredible amount of ground and finished fourth.

It was the fourth win in 14 starts for Idyllic Beach. The time was 1:52.2.
Nike Franco N tops older pacers

Nike Franco N burst from the pack entering the stretch in the $105,000 Allerege Pace and showed her heels to her playmates and hit the wire with a comfortable margin in 1:51.2.
A tight pack of mares battled for minor spoils with Blue Moon Stride nabbing second and Lady Shadow holding on for third over Bedroomconfessions.

Wrangler Magic had the early speed in this Allerge with a torrid dash to the top leaving the gate. Blue Moon Stride moved after the first quarter in 28 seconds and grabbed command at the 55-second half-mile. Next to attack was Lady Shadow, but she weakened in the final 200 yards as Blue Moon Stride passed Lady Shadow to claim second place.

Nike Franco N is trained by Jim King, Jr for Richard Pollucci of Massachusetts and she now has five wins in 14 starts this season and pushed her 2017 earnings past $300,000.

Coming off an impressive 1:52 score over the twice-around at Delaware, OH, Emoticon Hanover got the afternoon’s action underway with her victory in the $67,000 Allerege for trotting mares as she splashed to victory in 1:51.2 in a race that saw pacesetting Pasithea Face S weaken after setting all the fractions.

The race was uneventful with the exception of Broadway Donna’s break. Pasithea Face S seemed on her way to victory until the final stride when Emoticon Hanover got her nose in front for Daniel Dube.

Charmed Life, Caprice Hill and Broadway Donna trailed them across the wire.

It was the third straight for Emoticon Hanover and she pushed her earnings past $900,000 for the season for Determination on Montreal and trainer Luc Blais.