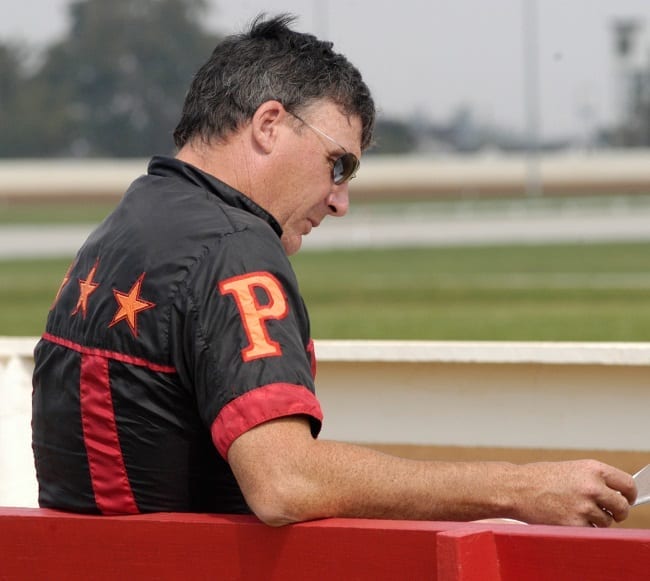 Catching up with Brett Pelling

Nine months after his return to the United States, the former top trainer said he is finally ready to gear up to make a serious run at the track.

Nine months after returning to the United States from Australia and more than 11 years after he last trained a top stakes barn, trainer Brett Pelling said this week he is finally ready to make a more noticeable return to the track.

“I thought that my work authorization would go through in, like, 45 days and it ended up taking basically six months. I just got it a month ago. So, now I’m good, but, you know, I couldn’t take risks,” Pelling said. “So I just kind of laid low and mucked around with a couple horses that I bought myself the year before and just kept working on getting the papers through. It’s disappointing. I would have liked to race a bit through the summer, but it just didn’t happen.”

Pelling, now 59, left the game and the United States at the top of the sport in January of 2006 to move his family to Australia. In January, he announced he was returning in an article in HRU (full story here) that also included his candid thoughts on the sport. Rarely shy about expressing himself, Pelling was happy to share a few thoughts this week about the state of the game as he drove from New Jersey to Kentucky.

To date, Pelling is training just a handful of horses and has made just 18 purse starts in 2017, but said, “We’re growing. My son is here with me. We’ve got another guy that we’ve hired on… I’ve got people ready to go.”

Pelling said he is grateful to Winbak Farms for giving him a couple of horses to train.

Asked if he’s enjoyed his return to the game, Pelling said it’s been good to see old friends.

“I enjoy being around the people that I’ve known for a long time and getting back on the road to see familiar places. I like being busy, so I’ve definitely enjoyed that,” he said.

“I’m (based) at White Birch Farm (in New Jersey), same as before. Actually, it’s White Birch’s own barn, which is a really beautiful barn. Joe Parisi, when he bought it, he spared nothing. It would be one of the most gorgeous barns that you could ever be in. It’s pretty cool.

“I’ve got to buy a place to live, so we’re kind of in the middle of finding a place right now. Hopefully, I’ll get that sorted out, but there’s a lot of work involved.”

Pelling said studying pedigrees in preparation for the fall yearling sales was an eye-opener.

“I’ve been away for 10 years. People say, ‘What do you think about the horses?’ And I said, ‘You know what? The trotters are unreal. The trotters have gone about three generations in one generation. It is unreal how many good trotters there are that can just trot fast, trot easy. I think they’ve gone leaps and bounds,’” Pelling said.

His take on the families of the sport’s top pacing stallions is not as glowing.

“The pacers have gone a step backwards. I’d go on the record saying that I believe the pacers are not what they were. The trotters have gone leaps and bounds.”

Pelling said he is in the market for some yearlings and would like to train a stable of 30, but he doesn’t want to train just anything for anyone.

“I’d rather be a little particular and keep control of it,” he said. “I’m not out there hustling. If you’re a good owner, you’re usually already with someone and you’ve got a good relationship so I’m not looking to take any owner from anybody. So, that makes it a little difficult.

“I want to buy a couple myself, anyway. I want to keep that going.”

Picking out yearlings is complicated, Pelling said, by the fact that he views Pennsylvania, the top jurisdiction for sires, as being overly protectionist of its residents. When residency is a primary criteria for getting horses in to race, Pelling said it can be a disincentive for people living outside the state to buy Pennsylvania breds.

Pelling said he also worries New York will soon follow Pennsylvania’s lead to try to keep as much of the slot money in the state, as well.

“It’s been interesting watching the lay of the land,” Pelling said.