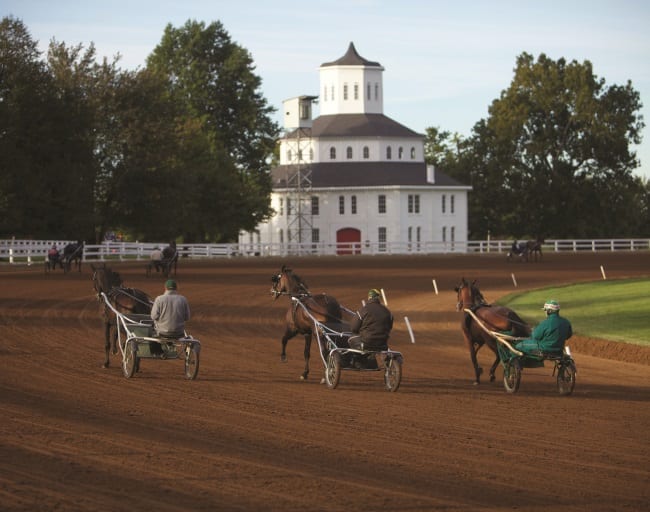 The Revival of the Kentucky Sires Stakes

Thanks to building its program based on mare residency and dual-eligibility, in three short years the number of yearlings nominated to the sires stakes program has soared and horses are racing for bigger purses on the beloved red clay at Red Mile.

The numbers indicate that in just three short years the Kentucky Sires Stakes (KYSS) program is on a meteoric rise thanks to a creative approach to eligibility.

Kentuckiana Farms’ Ken Jackson, who represents the Kentucky Standardbred Breeders Association on the Kentucky Sires Stakes Advisory Panel, said the program was revised in 2014 to become a dual-eligibility program with focus on mare residency rather than attracting stallions to the state.

The number of registered mares in Kentucky is also going up, Jackson said.

“We have, based on the last tally, more than 550 mares residing in the state registered into the program,” Jackson said. “Next year is going to be the really exciting number because, if you take 2017, which counts the yearlings nominated, the two-year-olds that were eligible to participate and staked in and the three year olds – that collective number of horses associated with the program will be in excess of 1,000. That number will go up because next year you’ll have your first full three-year-old and two-year-old class (all eligible under the new program),” Jackson said.

On Sept. 17, $1.7 million in purses were awarded in KYSS events held on Super Night at Red Mile. Four divisions of two-year-olds that qualified under the revised KYSS program raced for purses of $250,000 apiece. The three-year-olds, which were still racing under the older program, had four divisions each with $175,000 finals.

“What’s even more exciting is the future because next year will be the first full year of the program. The three-year-olds this year raced under the old program,” Jackson said. “There is a $30,000 guarantee for each leg. So, in 2018, it will be the first full year of $30,000 legs for two- and three-year-olds. Each division will have three legs and the final for each division will be for a quarter-of-a-million. We are offering for the first time next year a $50,000 consolation. So when you add it all up and do your projections out, I think those numbers total up to a program north of $5 million, which is meaningful. It’s a very significant program.”

Breeders such as Steve Stewart of Hunterton Farms said the growth of the KYSS program is of critical importance with the Lexington Selected Yearling Sale beginning on Oct. 3. Stewart said he expects Kentucky-eligible yearlings to fetch a premium. Mares are eligible to the Kentucky program if they are in Kentucky for at least 180 days in the year of conception, regardless of where the stallion stands.

“I think it helped (at last year’s sale), but I think it will be exponentially more this year, for two reasons. One is that, horsepeople, I don’t know if they are ‘Doubting Thomases’, but they have to see the money and sometimes yearlings don’t sell for as much until they do,” said Stewart who represents the Kentucky Horse Racing Commission on the Kentucky Sires Stakes Advisory Panel. “Now, the Tony Alagnas or the people who have played (in Kentucky this year) have really shown that it’s a big bonus for these horses that are eligible to Pennsylvania AND Kentucky. Basically, we’ve never had the opportunity to use the word ‘and’ when talking about Sires Stakes. You know, it’s normally ‘You’re Ontario-eligible’ it’s not ‘Ontario and…’. But ‘and’ makes a big difference and I think it will make more of a difference this year.”

Jackson said increased money in the KYSS program is clearly going to help the value of Kentucky-eligible yearlings at the sale, but isn’t sure how much it may increase the value over last year or the year before.

“There’s all kinds of dynamics that come into play on supply and demand. But based on what we are being told by people looking at yearlings on the farm over the last two to three weeks, people are specifically asking for Kentucky-eligibles,” Jackson said. “It seems to really excite them that they can look at a Muscle Hill and know that if maybe that Muscle Hill isn’t ready or it’s a better fit due to their gait, etcetera, to come to Kentucky they can do that. I will also be interested in looking at 2016’s yearling prices on dual-eligibles versus 2017 yearling prices on dual-eligibles and at that point evaluate what potentially is happening.”

Brittany Farms’ Art Zubrod, who represents the Kentucky Standardbred Development Fund on the Kentucky Sires Stakes Advisory Panel, said with more money now flowing to purses thanks to Historical Racing machines at Red Mile, it was critical to show politicians that the money was being used wisely to invest in Kentucky.

“It’s done what the state wanted us to do,” Zubrod said of the KYSS program. “They wanted to promote the equine activity in the state of Kentucky, and a mare does just as much as a stallion, maybe more, because we have an influx of 200 mares where you might get 10 stallions, maybe.”

Jackson said breeders have tried to attract stallions to the state in recent years with little success.

“The stallion is obviously critically important, but, for whatever reason… because of the purse structure (in Kentucky) maybe, we weren’t getting the opportunity for the quality (stallions),” Jackson said. “But when we switched to a mare residency program that allowed for some of the sport’s leading stallions to have offspring eligible, the numbers spiked up in eligibilities, but also under the mare residency program 180 days is required so we’ve seen a significant spike in the number of mares that the Kentucky farms are now boarding. So, that trickled down, from a business standpoint, to veterinary care and everything else that it brings to the state of Kentucky.”

Jackson said Kentuckiana has already taken in some high-profile mares.

“What I would call one of the greatest broodmare bands in the business, the Katz-Libfeld band, came to Kentucky and is part of this program and is significantly participating in it,” Jackson said.

It’s all part of quite a resurgence in Kentucky in recent years.

“When I started and went to work for Kentuckiana, I think there were 15 or so farms, counting a few real small mom and pops, just in the Lexington area,” Zubrod said. “There were a few scattered in the (surrounding) counties and then a few more around the state. There were around 30 active breeding farms and any Saturday you’d see 20 trailers over at Castleton Farm, breeding mares.

“But then as the business really started to shrink, and we didn’t have any money to race for. The Sire Stakes shrunk down to the point where we were out begging for money for our program. I can remember a meeting we had with the fair people, because they were funded by the state, begging for a little money to get us through for a couple of years. But we persevered. Joe (Costa) at The Red Mile came up with a plan to get us some funding from the state… and that kind of got us started and it’s been rolling since then.”

Though other sires stakes program have more money, Jackson, Zubrod and Stewart said Kentucky has some distinct advantages centred around being renowned as a state that raises great horses, as well as the big, beloved, red clay surface at Red Mile.

“Everybody loves the surface at The Red Mile so, obviously, that’s a great place to prep horses and it will be interesting to see some of the horses that have surfaced through this Kentucky two-year-old program… how they look as we get into the Grand Circuit and the fall with Breeders Crown,” Jackson said. “We think that Kentucky is the best place in the world to raise a horse. We’ve been pretty proud of that for a long time, the horse capital of the world. So to be able to start seeing new mares and their related foals be raised here, it’s exciting.”

The timing of the KYSS races is also drawing favorable reviews from some trainers.

“What we are hearing from the trainers and owners is that they really like that the legs have been spread out between 10 and 14 days apiece,” Jackson said. “There’s been a lot of time spent trying to ensure that this truly has the potential to be a dual-eligible program, so we looked at Ohio, Indiana and Pennsylvania and neighboring jurisdictions and tried to set our legs and finals in a spot where people could participate in their programs if the stallion was from another jurisdiction, but also could choose Kentucky as an option in addition to that.”

That much of the KYSS action takes place in August is also a positive, Zubrod said.

“Your horse could come here on the first of August and stay here until the first or second week of October and never have to leave,” Zubrod said. “They could race every 10, 12 days or something like that. Can’t beat it.”

Stewart said an August start may be beneficial to some two-year-olds.

“Tony (Alagna) was talking about Band Stand. He keyed her for The Red Mile in August. So many people have to key for the Pennsylvania Sires Stakes, which start July 4 or some of the Grand Circuit races at the Meadowlands that start at the end of July,” Stewart said. “(In Kentucky), it’s August they really need to be at their best, not July. I think that really helps with the two-year-olds. Plus, the fact that The Red Mile is so nice for a two-year-old, and there is no shipping. Those horses live right there and they don’t have to go anywhere. If you’re in Pennsylvania, you’ve got to ship to The Meadows for five hours. There’s a lot of shipping involved in Pennsylvania and New York. In Kentucky, there’s no shipping. They are right there at The Red Mile. It’s not a bad deal for a horse or a human.”

Stewart gives another example of the KYSS program providing greater opportunities for horsepeople.

“There was a filly that we sold for $150,000 that (Ron) Burke bought. Her name is Lets Fall In Love. If you look at her, she’s a Rock N Roll Heaven filly and she’s a perfect example of what The Red Mile can do,” Stewart said. “She’s a New York-eligible, so they started racing her in New York. If you just look at her lines, she would be a good poster child for the (Kentucky) Sires Stakes program. She races in New York on those half-mile tracks, doesn’t do any good, finishes third or fourth or whatever, then they bring her to The Red Mile. In her first start, she cuts the mile and ends up getting beat by two or three lengths. I think she finished third in the second leg. Then, in the third leg, she raced really good and finished second. Then she finished second in the final and she gets second money and picks up $65,000 and paces in :52.3 or something. And, Bill Donovan, the owner, told us that she’s now getting sounder. Those half-mile tracks were hard on her, which we all know they are for two-year-olds, so they bring her to The Red Mile and now she’ll probably race in the Grand Circuit and hopefully do even better.”

Zubrod said he is bullish on the future of the program

“I think in two or three years you’ll see a program that might not outshine anybody, but it will be just as bright as anybody,” Zubrod said.

Jackson said he’s excited the numbers, so far, bear out what he thought would happen when changes were made three years ago.

“Clearly, we are excited about the growth of the program. We’ve heard nothing but positives about the change that occurred in 2014 that created a mare residency or dual-eligibility program,” he said. “We feel pretty good, and I think the numbers speak for themselves.”