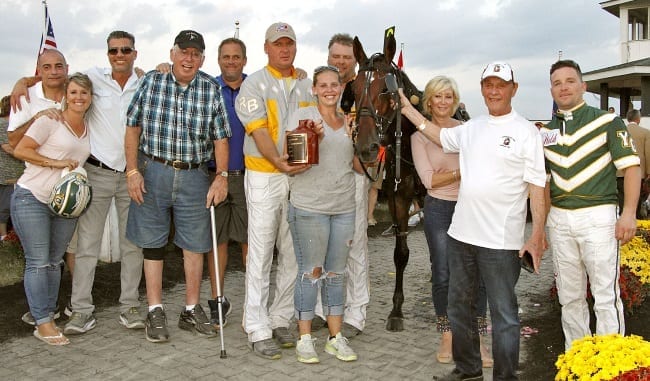 On the day after, Filibuster Hanover’s driver and part-owner discuss what it means to win the Jug and how they did it.

The day after winning the Little Brown Jug, driver Yannick Gingras said winning it a second time was even better than the first due to one of Filibuster Hanover’s connections.

“A great friend of mine (Joe Di Scala, Jr.) owns a piece of him. We’ve been coming to the Jug together since 2005 or 2006. It’s been over 10 years of hanging out together at the Jug and him owning a piece of it made it that much more special,” Gingras said.

Filibuster Hanover, who won the 72nd Jug on Thursday at the Delaware County Fairgrounds in Ohio, is also owned by his trainer, Ron Burke, as well as Jerry and Theresa Silva and Mark Weaver and Mike Bruscemi’s Weaver Bruscemi Stable.

“Obviously, winning it for Ronnie and Weaver is great, of course, but Joe and I go back a long way. I actually trained horses for him back before I even went to the Meadowlands so we’ve been friends since 2001 or 2002,” said Gingras, who admitted he revels in the camaraderie of Jug Week.

“Being there for a couple of days, everyone hangs out together,” he said. “We all live so far away from each other, all the drivers and all the trainers, so there’s not a lot of just hanging out together anymore. I think back in the day there was a lot more of that, but nowadays, obviously, we all have our lives, we all have kids… to have a few days together is a lot of fun. Just a few nights, hanging out and partying, having a good time, telling stories… The Jug brings everyone together.”

Winning it, is even better.

Weaver said coming into the race he thought Filibuster Hanover had a good shot despite trainer Brian Brown — who is based in Delaware, OH — receiving the majority of press for his top entry of Fear The Dragon and Downbytheseaside. Another factor in Team Burke’s favor was the elimination of the race-off beginning this year, meaning the winner of the second heat is the Jug winner.

“I know Brian (Brown’s) horses got all of the hype, but just the way they were coming into the race I don’t know that either one of them was on their game,” Weaver said. “Just as a fan I thought it was going to be a pretty interesting race and also with it being two heats instead of three, and the second heat being the winner, I thought maybe that would play a little differently on how horses were raced.”

Gingras said he and Burke agreed that, “Downbytheseaside and Fear The Dragon were maybe not as good as they had been at the start of the year. So both of us felt there was an opportunity to get the job done on this one. Definitely flying under the radar didn’t hurt, but we certainly did not concede going in. We felt that our horse was as sharp and as good as they were going in.

“We both thought, going in, that (Filibuster Hanover) was sitting on a big mile. Months ago, we talked about how the Jug might be a place where he could pop out a huge mile… Most of the time you have plans and they don’t work out, but it’s nice when they do come to fruition.”

On the subject of plans not coming to fruition, Weaver said he feels for Brown, who appeared poised for a huge hometown victory two years after his colt Lost For Words was nosed out in the Jug by Wiggle It Jiggleit.

“I have a lot of respect for Brian (Brown) and I know what it’s like to lose races that you are supposed to win,” Weaver said. “He probably had the better horses (this year). I think Mission Brief was the best horse in the Hambletonian and she wasn’t right. Southwind Frank was the best horse in the Hambletonian and he wasn’t right. I’ve had many letdowns. The Adios is a race that we want to win and we don’t get it done, but I actually felt for Brian… I was happy to win, but there are plenty of other trainers that are fun to beat. He’s not one of them. I didn’t want to be too overly jovial.”

As for the winning move, Gingras said finishing second by a neck to Fear The Dragon in the first Jug heat set Filibuster Hanover up with the two-hole in the final (post positions for the final were determined by the order of finish in the first heat). Gingras blasted to the front and didn’t look back en route to a 1:50 victory

Did Gingras ever consider letting Downbytheseaside and driver Brian Sears go when they attacked early in the mile?

“Not a shot. Not a chance in the world,” Gingras said. “If he didn’t get in the two-hole, he was going to get parked. Sometimes you go into the race and you have a plan A, B, C and D, but this race, my first goal was to get around David (Miller driving rail horse Fear The Dragon) and once I did get around David, there was no plan B,” Gingras said. “It’s the Little Brown Jug, half-mile track, we were going to go down swinging.”

All of which came together pretty well considering Filibuster Hanover has had some physical issues this year.

“As much as anything, I think physically… he’s just a tough horse,” Weaver said. “He has not been 100 per cent. Even scoring down for the Jug, Doug Snyder, a local trainer/driver from The Meadows said, ‘Mark, does he always look this bad?’ I said, ‘That’s actually good for him,’ but he seems to warm up out of it and when it’s time to go, he’s pretty tough.”

Weaver said he didn’t know what specific challenge Filibuster Hanover is dealing with, just that, “Ronnie is constantly working on it… It may be his feet, but I really don’t even know.”

No matter. The son of Somebeachsomewhere out of Fashion Ecstasy got the job done. Afterward, members of the Burke family made up a large part of the winner’s circle contingent.

“They’ve been coming to the Jug for so many years as a family,” Gingras said. “It is a close-knit family. They all work together and they are all really close. Everybody was there at the Jug. You know, sometimes you can win Breeders Crowns and this or that, and a lot of times Ronnie isn’t even there and the family is not there, but yesterday everyone was there so that’s what makes it so emotional and special for Ronnie,” Gingras said.

Weaver chuckled when he was told that.

“He’s lying if he says it’s the first time because I saw him cry when Sweet Lou set the record of 1:49 as a two-year-old in the Breeders Crown. That was the first time,” Weaver said.

It’s all part of an incredible journey that has seen the Burke Brigade dominant the trainer standings for the better part of a decade.

“It’s a crazy game. We’ve had so much success over the last eight, 10 years. Before, we were a racehorse stable and people said, ‘All they can do is buy horses off other people and get them good’ or ‘They can’t develop their own.’ So then we started to buy better yearlings and the whole stable has evolved. Then it was ‘Okay, you can’t do it with trotters’ and now we’ve been right there in the thick of it three years in a row in the Hambletonian, and winning the Haughtons,” Weaver said.

Now you can add twice winning the Little Brown Jug to that list.