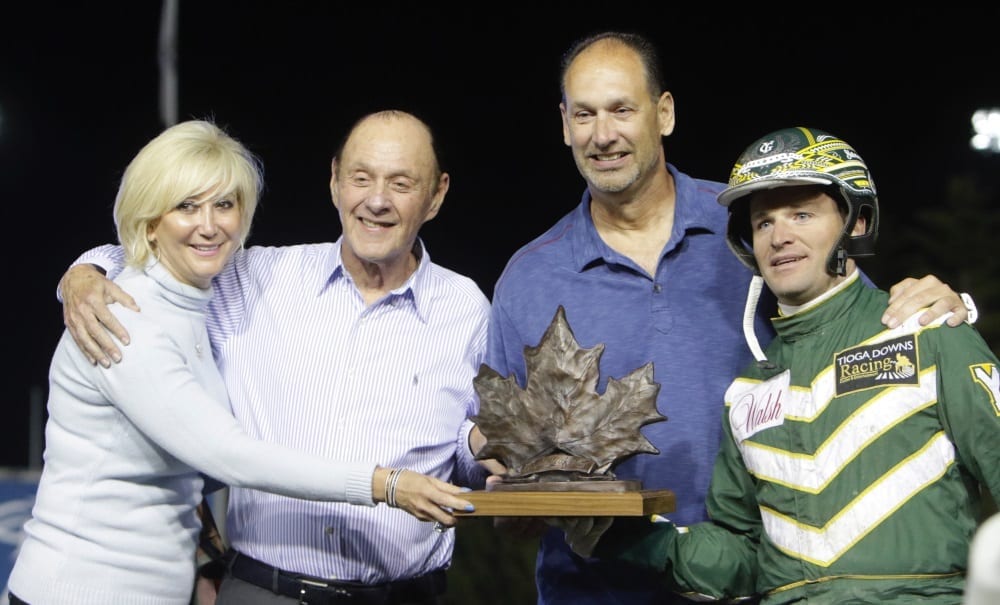 A year after finishing second in the Maple Leaf Trot, Hannelore Hanover turned the table on the boys with a dominant score in Saturday’s $594,000 final at Mohawk.

Owner Jerry Silva had a heck of a night at Mohawk as part of the Ron Burke team that won both the $684,000 Canadian Trotting Classic (CTC) with What The Hill and the $594,000 Maple Leaf Trot (MLT) with mare Hannelore Hanover.

“The mare is just so special,” said Silva, who bought into the 5-year-old daughter of Swan For All—High Sobriety at the end of 2016. “She just knows what to do, likes to do it and doesn’t stand in the winner’s circle. She wants to run back into the paddock and around the racetrack again and she can… in control, in control.

“It couldn’t be better. I hate to go off at 1-2 because it makes you worry, but with Yannick (Gingeras) and Hannelore – they ease all of your problems. She loves Mohawk. She’s tough on the turns, five-eighths or a half is not for her, but we’ll keep her on the big tracks and make a lot of money.”

Hannelore Hanover finished second to Resolve in the 2016 Maple Leaf Trot and got her redemption with an impressive 1:51.1 victory in Saturday’s final.

Driver Gingras seized the lead heading to the half and proceeded to trot away to a 4 ½ length victory for trainer Burke and owners Burke Racing Stable LLC, Weaver Bruscemi LLC, Frank Baldachino and J And T Silva Stables LLC.

“When she’s like this, in North America anyway, I’ll take on any trotter,” said Gingras.

Silva said he’d like to see her take on European trotters one day.

“I’ve got to talk to Ronnie in Lexington, but maybe he’ll think of the Elitlopp, which I’ve been in two or three times,” Silva said. “I wanted to go there with Mission Brief, but Mission Brief didn’t want to go there… I say that facetiously, but she sored up and it wasn’t in her world. We sold her to Steve Stewart and his team to breed her and hopefully he will get a champion out of her. Then we can buy the baby, because we’re really not breeders. We’re racehorse people.”

In the MLT, JL Cruze shot out to the grab the early lead and posted a snappy opening-quarter of :26.2. Hannelore Hanover settled into third in the early going, while Gingras waited to make his move.

Hannelore came with a second-quarter rush and secured the lead in time to post a half of :54.3. Odds On Amethyst came first up in the third-quarter and got up to the wheel of the leader, but Gingras got a comfortable third-quarter of :28.4 to lead at that station in 1:23.3.

In the stretch, Hannelore Hanover waved goodbye to her rivals and trotted home strongly in :27.4 for her biggest victory to date. JL Cruze finished second, while Pasithea Face, the other mare in the field, was third. The Superfecta was completed by Warrawee Roo.

“When she’s like this you can race her any which you want,” said Gingras about moving Hannelore Hanover to the lead. “They told me how good she trained and the great week she had and they sure were right.”

The victory is extra special for Hannelore Hanover’s connections after coming up just short in last year’s event.

“Last year she raced her heart out and was second to Resolve in a great race,” said co-owner Baldachino. “For her to comeback a year later and actually win it, it’s real sweet and very special.”

Hannelore Hanover is now six for 10 this season with $634,986 earned. The talented trotting mare surpassed $2 million in career earnings with her 32nd career win Saturday.

Hannelore Hanover’s Maple Leaf Trot victory is the first win in the event for driver Gingras and trainer Burke.