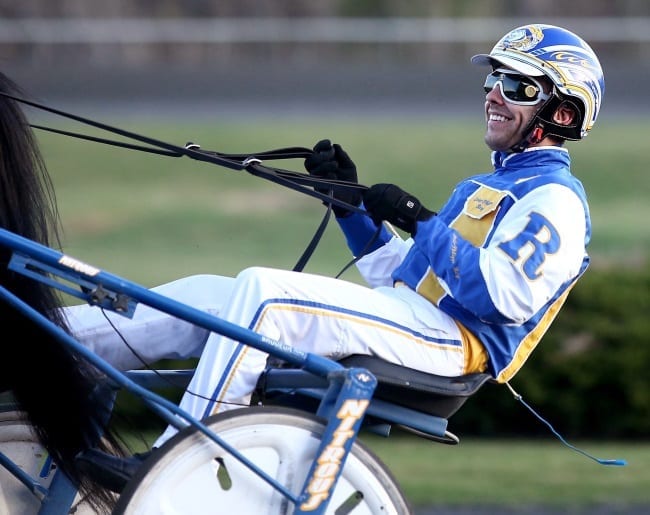 Roy gets chance to shine for Burke in Canadian Pacing Derby

Louis Philippe Roy has made a remarkable impression in his first year on the Woodbine Entertainment Group (WEG) driving circuit and is now rewarded with the liveliest of drives for the sport’s biggest trainer in the $615,000 Canadian Pacing Derby.

Roy will steer the 5-year-old gelding Rockin Ron for trainer Ron Burke, as the strongest of three Burke horses in the race. It’s rare that you see someone other than Yannick Gingras or Matt Kakaley on a Burke contender in a race this big, but that will be the case on Saturday at Mohawk. The combination of Roy and Rockin Ron first came to be last week in an elimination for the Canadian Pacing Derby when Gingras drove Check Six for Burke, leaving a vacancy on Rockin Ron.

In his CPD elimination with Roy at the helm for the first time, Rockin Ron crushed foes that included Sintra and McWicked to win with total authority in 1:47.2; right up there with the fastest miles ever paced in Canada.

Roy provided a spark for Rockin Ron in last week’s elimination, but Burke attributed the race to a combination of both the driver and horse. “Roy did a good job but this horse is getting sharp,” Burke said. “Yannick was second with him in 1:48 the week before at Tioga and Matt (Kakaley) was second with him at Saratoga in 1:49 coming from last. This horse is getting very good right now.”

The fact alone that Roy is getting the call for Burke in a spot this big almost speaks for itself as to Burke’s opinion of the upcoming driver, but he explained it in a bit more detail.

“We’ve used him before in the North America Cup and in the Prix d’Ete,” Burke said. “He’s a young guy up here that fits the mode of the drivers we usually use. He’s one of the guys upcoming with a chance and in a short time with more experience he’s getting better and better. And he seems to be available when we need him which works out good.”

Although Burke used Roy in the two races mentioned, those horses — Filibuster Hanover and Roll Away Joe — never really had a shot in those races. The Canadian Pacing Derby will be a different story and as good as Roy was last week with Rockin Ron, was there ever consideration to replace him for the final on Saturday with Gingras? “No, there was never a doubt of taking Roy off,” said Burke. “Plus, I knew Matt (Kakaley) was going to be staying at Yonkers so Yannick was going to keep All Bets Off or Check Six, whichever came back better. And then Timmy (Tetrick) became available for Check Six so it was the perfect storm of guys that fit each horse everywhere.”

For those who still may not be acquainted with Roy, they should be after Saturday. Roy has already made himself well known to those who follow the WEG circuit and among his credentials this year include a 1:50.3 win for the Casie Coleman-trained Summer Travel in the Dream Maker series, which is the fastest mile in North America this year by a 2-year-old. With the more expansive audience on Saturday we’ll see if Roy may go even the slightest bit overlooked on the Burke horse.

Rockin Ron rates as the second choice at 3-1 on the programmed line in the Canadian Pacing Derby and he very well may end up as the favorite come race time. Rockin Ron paced a :52:4 back half and that was after setting a :54.3 clip on the front end in his elimination; there’s not a real reason to search elsewhere considering how visually impressive a race that was.

The role of morning-line favoritism lands on the oldest horse in the race, the 9-year-old Keystone Velocity. At his advanced age and clearly thriving under trainer Rene Allard, Keystone Velocity exits a career best mile when he won his elimination in 1:48.2 last week, which included an unbelievable final quarter of :25.1. Keystone Velocity is versatile but I think he’s best when coming from off the pace; probably won’t want to get too involved early with Rockin Ron and potentially others.

As for the other contenders, McWicked couldn’t get closer to six lengths from Rockin Ron last week although he should be much closer early having the benefit of the rail. Trainer Coleman has reported that the horse is training well although he continues to be bothered by a foot issue.

Burke said that the plan was for Yannick to take either All Bets Off or Check Six, and since he chose the former we may be able to assume that horse rates better than the latter. All Bets Off is always around for a share, but hasn’t been able to break through of late with a marquee win against these types of rivals. Stablemate Check Six is likely to be forgotten from post 10, although he’s only three races removed from his 38-1 upset against similar rivals on Hambletonian day.

Dealt A Winner actually beat Rockin Ron two back at Tioga to the tune of 35-1, but he wasn’t as strong in his elimination last week. Sintra was bet all the way down to 2-1 last week but couldn’t do anything from the pocket against Rockin Ron and now he’s staring at it from post 9; tough to make a case for now.

Race 10: NEW JERSEY VIKING hasn’t won, yet, on the year, but this is a huge drop compared to the Hambletonian-type foes this one has been up against. On paper he’s fast enough, but he is the lone 3-year-old in here against older. JUST FOR TODAY continues to have issues staying flat, but he isn’t without a chance if he shows up with his mind on matters. MANWITHAMISSION comes out of his best try yet for Burke; will look to sit a good seat early once again. SILVERMASS VOLO was able to pounce on weaker last time out en route to a career score, but I’d be surprised if he can do it against these; playing against from post 8.

Race 11: PILGRIMS TIDE was well supported when dropped to this level two and three back, but broke both times. He’s since qualified to be second to open trotter Hemi Seelster and gets a driver change to Kakaley; worth including at a price. BY AND BY HANOVER makes her second start since the trainer change to Tom Jackson; need not be much to win this. TOMMY BAR may be a short price by default; Nap gets a shot now. CO-O-TO BLUEGRASS makes his second start at the basement level and WINNING WIZARD has some early speed.

Race 12: WAKINYAN kept up well enough three back at the Meadowlands in a 1:50:4 mile and doesn’t look like he’s been bad since at Yonkers and Saratoga; may go right to the front on the drop. FOOL OF IDEAS was active throughout in his race last week here in the same class; goes from Buter to Kakaley. MEETBEHINDTHEBARN has been here before and trainer Renaud is more than playable; I don’t know if I’d want to get beat by this one. DEALMAKER drops in need of a wakeup; Marcus might take an early shot from out here.

Race 13: AFFAIR OF HONOR has been battling it out against better and he’s capable of speed to overcome the post; simply might be a higher quality horse than most of these. Tough call on CENTURION HANOVER as he won here in 1:54:4 in June, but hasn’t looked as strong since returning from the qualifier. OMG HANOVER showed speed and was shuffled last out; has hit the board in two straight in this condition. WIAGRAM HANOVER faces older as does #9 but he comes off a quality score; an obvious short priced contender. COMING UP TOUGH goes for a new barn after fading last time out in a 1:54 mile.

Race 14: The old Michigan-bred CADILLAC CRUISER drops for the third straight race and this is a far cry from out he’s usually up against. He’s an automatic threat from this level and has to be included on tickets, even from post 8. QUIET GIANT is another class dropper although trainer Bath is 1 for 32 at Pocono, another tough call. JJ ALEX invades from Pocono but looks nothing like that 1:53:4 we see from over this track last year. A LISTER wasn’t terrible last out against better.