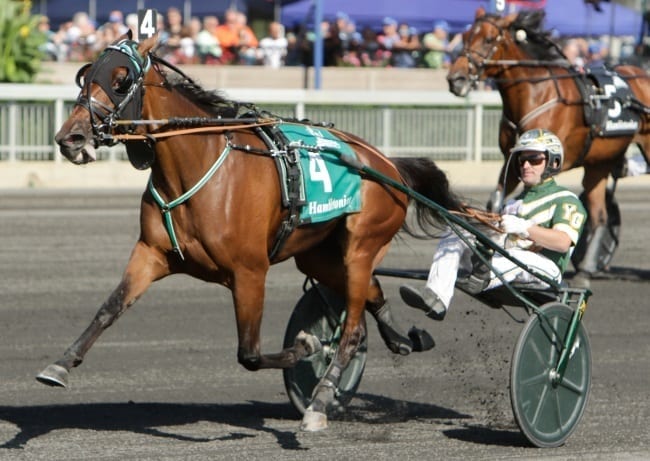 Marvin Katz and Al Libfeld’s opted not to race their homebred trotting filly against the boys in the Hambletonian and the result was an impressive victory.

As Yannick Gingras left the Hambletonian Oaks winner’s circle with Ariana G to take her back to the paddock, he spotted the homebred filly’s part-owner Marvin Katz and shouted, “You still made the right call.”

The driver was referring to the decision of the connections to race Ariana G in the $500,000 Oaks, rather than against the boys in the $1 million Hambletonian. Katz just grinned and gave Gingras a thumbs up. After all, the way Ariana G destroyed the Oaks field — winning by four-and-three-quarter lengths in 1:51.2 — one had to wonder how she would have fared against the boys. Even watching Ariana G pull away in the stretch, Katz said he never wavered.

“Once we made the decision, that was it. I was comfortable that was the right decision,” Katz said. “We really vacillated, we went back and forth, and it was a difficult challenge. We left it to the smartest guy in the operation Jimmy Takter and he made the decision for us.”

Katz, who shares Ariana G’s ownership with Al Libfeld, said the fact the Hambletonian is raced in same-day heats was a consideration.

As for Takter, it was his fourth straight Hambletonian Oaks victory.

“I don’t think about that too much,” Takter said of his accomplishment. “I think about each individual horse coming up, you know. But she’s fantastic, she’s a really good filly… She’s the kind of horse that it doesn’t matter, she’s tough to get by. She’s really hard. She fights to the death.”

Sent off at 1-5, Ariana G was moved to the lead at the half-mile mark at :54.4 and then cruised to victory, also the fourth straight Oaks victory for Gingras.

“I was really concerned about Magic Presto and obviously you have to respect the competition,” said Gingras. “When he got away on the first turn and I really didn’t want to be first over that long of the way, so I decided to do whatever I needed to do to get her to the front. It wasn’t the best move I think, but she is just a great horse and a great horse can overcome anything.”

“That’s about as excited I’ve been in a race,”Katz said of Ariana G. “We’ve had some phenomenal victories. With all the hoopla in the build up to it, obviously, it just felt like it put more pressure on the whole thing and you know with the history, of course, to win the Hambletonian Oaks twice back to back, with full sisters that we bred ourselves. It’s an extraordinary accomplishment and one that I’m going to cherish forever.”