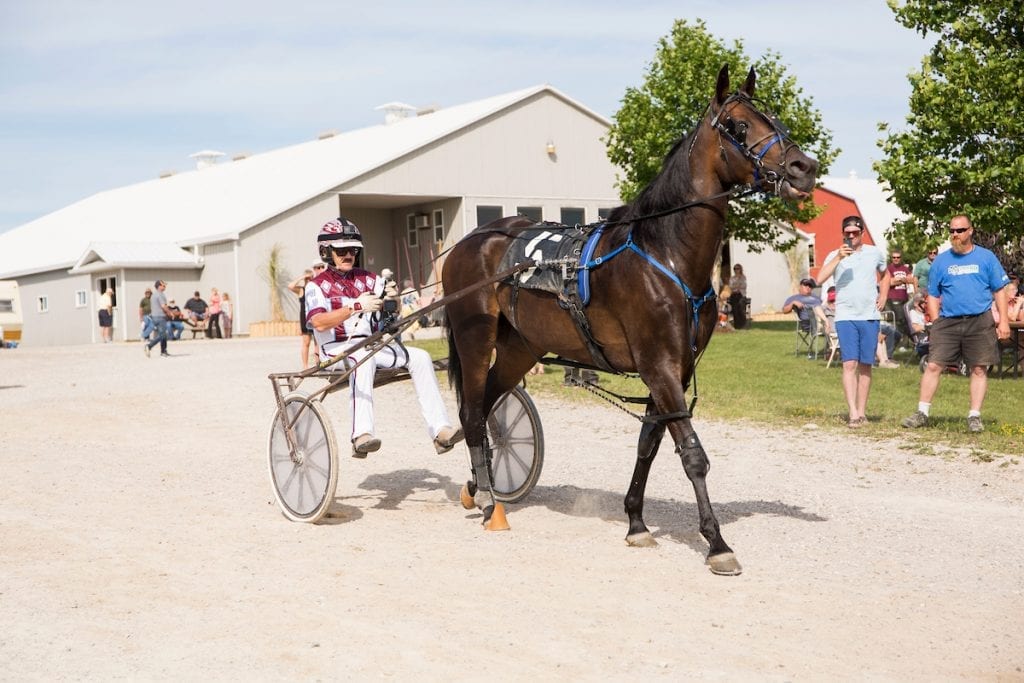 John Campbell said he could not have planned a better way to end his driving career than to do it back in his native Ontario on Legends Day at Clinton Raceway.

Even finishing last in his farewell race — after his trotter Happy Holidays made a break — couldn’t ruin John Campbell’s sweet goodbye from driving Sunday (July 30) at Clinton Raceway in his native Ontario in front of the biggest crowd in the track’s history.

“It worked out the way my first drive did,” Campbell said with a grin. “The horse made a break and finished last. Same thing today — but the in between part was okay.”

Campbell, 62, retires from active sulky duty as the richest, most decorated driver in the sport’s history. Depending on whether you prefer USTA or Standardbred Canada statics, he has either just shy or just over $300 million to his credit.

Minutes before he hit the track for the final time, Campbell stood in the Clinton Raceway paddock at the top of a hill near the famous red barn that overlooks the clubhouse turn and repeated what he’s said since March when he announced his retirement to become the president and CEO of the Hambletonian Society. Even after 45 years driving horses, Campbell said his state of mind had not wavered one bit.

“I’m at peace with it, to tell you the truth,” he said, smiling.

Afterward, with his final drive complete, Campbell, surrounded by four generations of his family in the winner’s circle, said he was, “Happy. Happy and content.”

Why not? What a way to go out.

Legends Day, which also celebrated the last drive of Campbell’s friend and former driving rival Bill O’Donnell, raised $57,000 for the Clinton Public Hospital Foundation — by far a record for a single Legends Day.

“I’m not surprised,” Fleming said. “I know that participants in racing are very good at donating for causes like this.

“We were pretty pleased with how it turned out. It was a good day for everyone involved – the hospital and horse racing.”

O’Donnell said a lot of memories came flooding back to him as he approached his final drive.

“Those things like the first horse I ever jogged when I was seven or eight years old on the old ash track in Springhill (Nova Scotia),” O’Donnell said. “My dad used to put me on the cart. Then, when I got a little older and Scott Daniels let me jog my first horse… I used to ride and Scott came up to me one day and said, ‘Go ahead, jog him around.’ I’ll never forget stuff like that. I was so nervous and so scared. You’re not big enough to keep your feet in the stirrups, but you’ve got your feet on the crossbar. I think that’s when I got bit by the bug right there.”

With his final drive over, O’Donnell admitted to being a little emotional.

“I know I’m never going to do this again,” he said. “When I take these colors off, I’m giving them away, but I think I’ll buy some other ones. I’m going to buy a horse or two to train, maybe, in a year or so. It’s the horses, too, not just the competition, though the competition part is over for me. Just to be around the horses in the morning, training them and jogging them and stuff, is what I do.”

Clinton lies less than an hour north of where Campbell grew up in the farming community of Nairn, near the town of Ailsa Craig. Clinton is also about an hour from The Raceway at The Western Fair District in London where Campbell recorded his first driving victory in 1972. Retiring so close to home brought his career full circle and the fans and old friends came out in throngs to say goodbye. Campbell was grinning all day meeting fans, signing autographs and posing for photos.

“It’s been a great day. I’ve seen so many people that I usually see here, but even more so this year because it’s a bigger crowd. It’s just been a great experience for me, the whole day… People here, they’re always special. Their enthusiasm, and reaction we get from them, is incredible.

“They were thanking me for me doing what I wanted to do,” Campbell said with some astonishment, “which is unusual when you think about it… The reaction and feedback from everybody has been very, very humbling.”

Campbell said when he was a kid, all he wanted to do was win races.

“I didn’t plan anything like this. I could never even dreamt of this happening. That part wasn’t in my wildest dreams,” he said.

He ended the day with a speech to the crowd (see sidebar, pg 8) that was thoughtful and poignant and — like the man himself — all class.