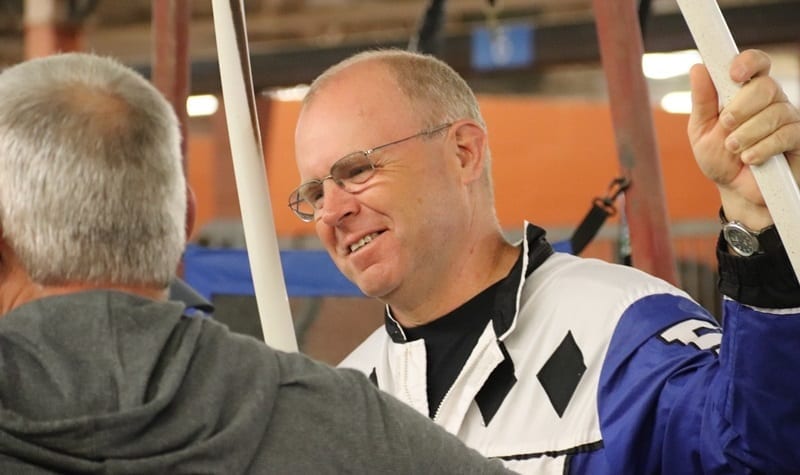 Butenschoen trying to take measured approach to his Hambletonian trio

Trainer John Butenschoen has come from the cornfields of Illinois by way of Pennsylvania, and Saturday he will send out four starters at the Meadowlands on harness racing’s biggest day. His trio of Bill’s Man, Dover Dan and Giveitgasandgo will look to advance in two Hambletonian eliminations, while Fine Tuned Lady will compete in the $500,000 Hambletonian Oaks. Butenschoen is doing his best to handle the excitement, and pressure, of racing on the sport’s grandest stage.

“Well anybody can do that, all you’ve got to do is write a check for $45,000. It’s simple, right?” he said of entering three colts in the prestigious Hambletonian with a hearty laugh. “I’m sure it hasn’t sunk in yet. It’s pretty cool when you think about it. It’s uncharted territory for me. Hopefully we have a little bit of luck.”

Butenschoen’s Hambletonian trifecta is matched in number by Ron Burke’s three-horse entry. The only other trainer to saddle four trotters in the day’s two headline events is Jimmy Takter. It’s a day that Butenschoen has been planning for since the early months of 2017. Planning is one thing, getting there is a challenge in and of itself.

“When we were in Florida this winter, when we made the payments in February, I paid six horses in,” Butenschoen said. “Three of the five that I had last year as two year olds continued on and have had a real good year. We’re trying to get the other two on track. It very well could have been that we were trying to get all five on track. You have hopes, you have dreams, and you make plans. Fortunately these three have stayed on track.”

Bill’s Man, the most consistent of his three-pronged attack, has drawn post two in the first Hambletonian elimination with morning line odds of 5-1. Corey Callahan will steer the son of Credit Winner out of 2004 Hambletonian Oaks winner Silver Springs. This season Bill’s Man sports a 2-4-2 record from nine starts. The colt finished second to Devious Man in the $252,000 Empire Breeders Classic and raced third to Walner and Devious Man in the Stanley Dancer, trotting in 1:51.3.

Post six will be occupied by Giveitgasandgo, PASS champion last year as a two-year-old. With a 3-2-1 tally from seven starts, the son of Yankee Glide—Mazda Hanover is on the upswing after finishing fourth in his Beal elimination and missing the final. He raced third in the $75,000 consolation and has since registered two wins. Giveitgasandgo, an 8-1 morning line selection, picks up the services of David Miller Saturday. It will be the first time the Hall of Famer has sat behind the trotter this season.

In the second elimination, Butenschoen sends out Dover Dan from post five at odds of 8-1. Brian Sears will be at the controls for the trainer. The Andover Hall colt is out of the great CR Kay Suzie, and has won two of eight seasonal starts. He earned a berth in the $500,000 Beal final in July but finished sixth. As a freshman, Dover Dan won his division of the Bluegrass at Lexington and trotted third in the International Stallion Stake.

“Bill’s Man has just been consistent all along. Dover Dan and Giveitgasandgo took a step back in the Beal, but subsequently they’ve both come back and raced very well,” the conditioner said in assessing his pupils. “After the draw came out you feel better knowing they’re in a spot where they can maybe dictate a little more of their own fortune and outcome instead of drawing outside. We’ll keep our fingers crossed and see if they make the final.”

Butenschoen has been here once before. In 2013, he arrived at the Meadowlands with Glidemaster colt Punxsutawney. An early break and fifth-place finish in his elimination prevented the trotter from advancing to the final. This time around, he is hoping for better racing luck. As exciting as it is to have three horses in the Hambletonian, he’s trying to treat Saturday’s events as just another race.

“My job is to make sure they are eating well, we don’t do anything stupid and nothing bad happens; try to minimize the mistakes,” he said. “I don’t think you can lose the fact that they are horses, and you can’t do things a whole lot different just because they are in the Hambletonian. You can’t do anything different than what you were doing to get here. You try to stay on the same program and stay out of their way.”

The trainer is happy for the connections behind Saturday’s four starters. Nine years ago, he left the Land of Lincoln for the Keystone State, and many of his owners came along for the ride. Now they have a chance at Hambletonian glory.

“We were forced out of our home state because of the economics of racing,” Butenschoen said. “Our owners followed us and stepped up and bought some nice colts. I just feel lucky and privileged for the chance to get there.”

Many eyes will be on the favored Devious Man and International Moni, and rightly so. Butenschoen doesn’t have illusions of grandeur. He’s taking a grounded approach to Saturday, knowing that the day could unfold in many different ways. He has prepared himself for all the scenarios that could play out, and despite the outcome, he has a simple desire for the trio.

“My goal is for them all to race well. If they race well and they get beat, they get beat, and that’s the way it is,” he stated. “What I’m hoping for out of the race is that they don’t beat themselves up. You want to see a good, clean race and let the horses decide. Obviously you want them all to get in the finals and all get checks, but realistically, it’s hard enough to get just one there.”