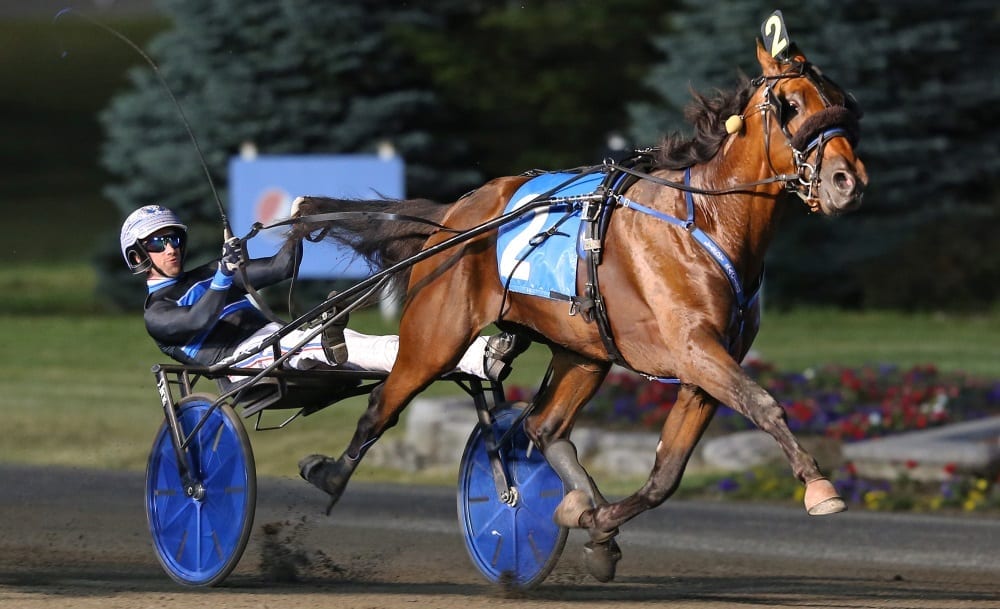 The trainer’s colt International Moni was named the favorite in his elimination for Saturday’s $1.2 million classic at the Meadowlands; Devious Man pegged as fave in the other elimination.

by Ken Weingartner for the Hambletonian Society

International Moni and Devious Man on Tuesday were made morning-line favorites for their respective eliminations in Saturday’s $1.2 million Hambletonian Stakes for 3-year-old trotters at the Meadowlands Racetrack.

The Hambletonian format calls for eliminations to be contested the same day as the final. A total of 19 horses entered this year’s event, requiring two $100,000 eliminations from which the top five finishers in each division advance to the $1 million final. Elimination winners draw for inside posts 1-5 and all other finalists will then be placed in an open draw. The winner of the final is the Hambletonian champion.

CBS Sports Network will air live coverage of the Hambletonian from 4-5:30 p.m. (EDT). The Sam McKee Memorial (formerly U.S. Pacing Championship) and Hambletonian Oaks also will be featured during the 90-minute broadcast. First race post time on Hambletonian Day is noon. The Hambletonian final is 5:11 p.m.

International Moni, who drew post five in the nine-horse elimination and is the 5-2 favorite.

His trainer, 33-year-old Frank M. Antonacci, told Harness Racing Update via text that he was thrilled with the draw.

“It eliminates a variable you have no control over, so we are very happy where we are at,” he said.

International Moni is undefeated in three races this year. He won the Goodtimes Stakes at Mohawk Racetrack on June 17, but suffered a bout of colic in early July that forced him to miss the Stanley Dancer Memorial, expected to be the colt’s final Hambletonian prep, at the Meadowlands on July 15.

He bounced back with a career-best 1:52 win July 22 in a 3-year-old open at the Meadowlands.

“I don’t think he could be heading into the race any better,” said International Moni’s driver Scott Zeron. “His whole year has been beautiful. I know they ran into the time where he was colicky and that put a bump in the road, but to me it didn’t really. We were able to get a really nice start into him. With a week off and now heading into the Hambo, to me it’s setting up perfectly.”

Zeron won last year’s Hambletonian, and eventually the Trotting Triple Crown, with Marion Marauder. He is attempting to become the first driver to win the Hambletonian in consecutive years since John Campbell in 1987-88.

International Moni, a son of French stallion Love You out of the two-time Horse of the Year Award-winning mare Moni Maker, is owned by breeder Moni Maker Stable. The colt has won four of 15 career races and earned $264,452.

Antonacci trains International Moni for an ownership group that includes his father, also named Frank, Gerald Antonacci, and David Reid. The Antonacci family and/or its Lindy Racing have been involved in the ownership of five Hambletonian winners: Lindy’s Pride (1969), Speedy Crown (1971), Probe (1989), Harmonious (1990) and Victory Dream (1994).

Devious Man, from the wife-and-husband team of trainer Julie Miller and driver Andy Miller, has won four of six races this year and finished no worse than second in his remaining starts. He drew post nine in the 10-horse elimination and is the 5-2 favorite.

His victories include the Earl Beal Jr. Memorial at The Downs at Mohegan Sun Pocono on July 1 and the Empire Breeders Championship on June 18 at Vernon Downs in a career-best 1:52.2.

The colt, owned by the Andy Miller Stable and Stroy Inc., heads to the Hambletonian off a second-place finish to Walner in a division of the Stanley Dancer Memorial. Walner, last year’s Dan Patch Award winner for best 2-year-old male trotter, will miss the Hambletonian because of a minor injury.

Devious Man, a son of Credit Winner out of the mare Miss Garland, has won 11 of 18 lifetime races and earned $750,200. He is a half-brother to 2005 Hambletonian winner Vivid Photo.

“We were really pleased with him in the Dancer,” Julie Miller said. “He trotted in 1:51 and Andy said he was really good, so I think that’s a nice race to go off of going into the Hambo. We trained him Saturday and he trained really good. I have a lot of confidence in him and just hope he does well.”

What The Hill drew post one in the elimination with Devious Man and is the 3-1 second choice. He is from the stable of trainer Ron Burke, who has finished second in the past two Hambletonians. What The Hill has won four of six races this year and heads to the Hambletonian off a career-best 1:52.1 win in the Reynolds Memorial last weekend at the Meadowlands.

For his career, What The Hill has won seven of 20 races and earned $417,236. His wins include the 2016 Peter Haughton Memorial for 2-year-old male trotters on last year’s Hambletonian Day. The most recent Haughton winner to return and win the Hambletonian was Muscle Hill in 2009.
What The Hill, a son of Muscle Hill out of the mare K T Cha Cha, is owned by Burke Racing, Our Horse Cents Stables, J&T Silva Stables, and Deo Volente Farms. David Miller is the driver.
The colt is one of three entries from the Burke Stable, with Southwind Cobra and Southwind Woody.
“What The Hill is a legitimate contender,” Burke said. “He’s going to be able to race either way (from the front or behind) and puts himself in play and tends to always finish right on the wire with everybody else. I think two heats is an advantage for him. He’s a big, strong horse. If anything, he’ll go better the second heat than the first. So that doesn’t bother me at all.”

Ariana G is the 6-5 morning line favorite in Saturday’s $500,000 Hambletonian Oaks for 3-year-old female trotters. Ariana G won her Oaks elimination last weekend by two lengths over Dream Together in 1:51.3 and will start the final from post four. She has won five of six starts this year and 14 of 17 lifetime for trainer Jimmy Takter and driver Yannick Gingras.

Ariana G, a daughter of 2009 Hambletonian winner Muscle Hill out of the mare Cantab It All, is owned by breeders Marvin Katz and Al Libfeld.

Magic Presto, who won the other Oaks elimination, drew post five and is the 5-1 second choice.