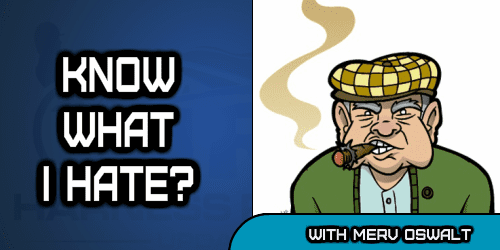 Everywhere I look there are things to hate: passport photos, 88 per cent humidity, self-serve grocery store check-out machines, which always seem to have an employee Johnny-on-the-spot to tell you that you did it wrong, but not actually to help check you out.

I’m getting too old for all of this. I like consistency and predictability, especially in the people and places that I encounter.

All I’m asking for is someone who makes eye contact with his eyes and good sense with his mouth, which is why I’m going to miss John Campbell when he hangs them up next weekend at Clinton Raceway.

Campbell, now that’s consistency. In close to 40 years, never did I have to wonder whether I’d check into a simulcast to all of a sudden see JC trying out a goatee. Just like I never had to worry that I wasted a bet on him or that I didn’t get my money’s worth from one of his drives. Good people.

Cripes, my kids cut their teeth playing the John Campbell board game. Who needs the Game Of Life or Monopoly, when the Campbell game gave you both in one roll-up tube? I still remember the lump in my throat when my then nine-year-old daughter Beckie chided her brother for setting such slow opening quarters.

Since I have an opinion on just about everything, you won’t be surprised to learn that I have a few thoughts about little Clinton, Ontario, too, the spot Campbell has chosen for his last drive.

Back in the days before you needed a passport to cross into our Canadian neighbor’s yard, we’d go visit my wife Bernie’s aunt Florence for a few weeks every summer at her cottage on the shores of Lake Huron in Bayfield, Ontario.

About 10 minutes inland sits Clinton, with a population sign that hasn’t changed from 3,200 in decades. Some smartass on its Wikipedia page recently updated it to 3,201, but you get the gist.

Since I’m not much for the dampness by the lake and the sound of delighted children playing in the sand, I would always cruise into Clinton and spend my Sunday afternoon with my people at the local racetrack.

And it’s a beaut, that half-miler, with that pretty red barn on the hill. That barn was home to Breeders Crown champion Lifetime Dream back in the early ‘90s and, boy, did those Clinton folk turn up at Mohawk the night she won it. Sometimes the little guys win big. I don’t hate that.

Just up the street from that red barn is the REACH Centre, a showcase-type place for horse and agriculture events, like various horse shows, barrel racing and civilian service horse school. You can even enroll in college and university level equine courses there. If you’re feeling shmancy on John Campbell Day – I hear there’s also an Arabian Horse Club Show taking place over there.

Above all, Clinton is a place that I can respect. This little town was the primary radar training site for Canadian, U.S. and U.K. servicemen throughout WWII and the Cold War.

Over the past few years, the town has taken its licks with two separate fires knocking out chunks of buildings on both sides of its historic main street, but these folks keep ticking.

There’s two high schools, two stop lights and basically three public places to score a drink — The Royal Canadian Legion, the Huron Fish And Game Club, and the racetrack/slot hall. Frankly, to my way of thinking, these are the only three worthwhile places to drink anyway — toasting a hero, toasting venison pepperettes or toasting a winning tri.

Sure, they’ve got Tim Hornuts like every other Canadian Tom, Dick and Harry town, but my money goes to main street stalwart Bartliff’s Bakery. I’ve gotten into many an argument over whether my black, black coffee is better complemented with Bartliff’s apple pie or a hot cross bun, but the real magic is something called a ‘mocha circle’. Yep, sounded pretty floofy to me, too, at first, but take my word for it.

Cross the street and head up a few blocks and you’ll find Marita’s Fashion Boutique, where my wife and daughter like to shop for pretty things.

Now, I’m the guy that usually sits outside the store holding my wife’s purse, but this is one place where I tag along because I get to talk horses there, too. You see, Marita’s is owned by a spry young lady by the name of Jess Carnochan, who is also the marketing manager at Clinton Raceway.

So, yeah, I guess there are two things I like, Campbell and Clinton. I’ll be there on July 30 and I even renewed my passport for it… which I hated.