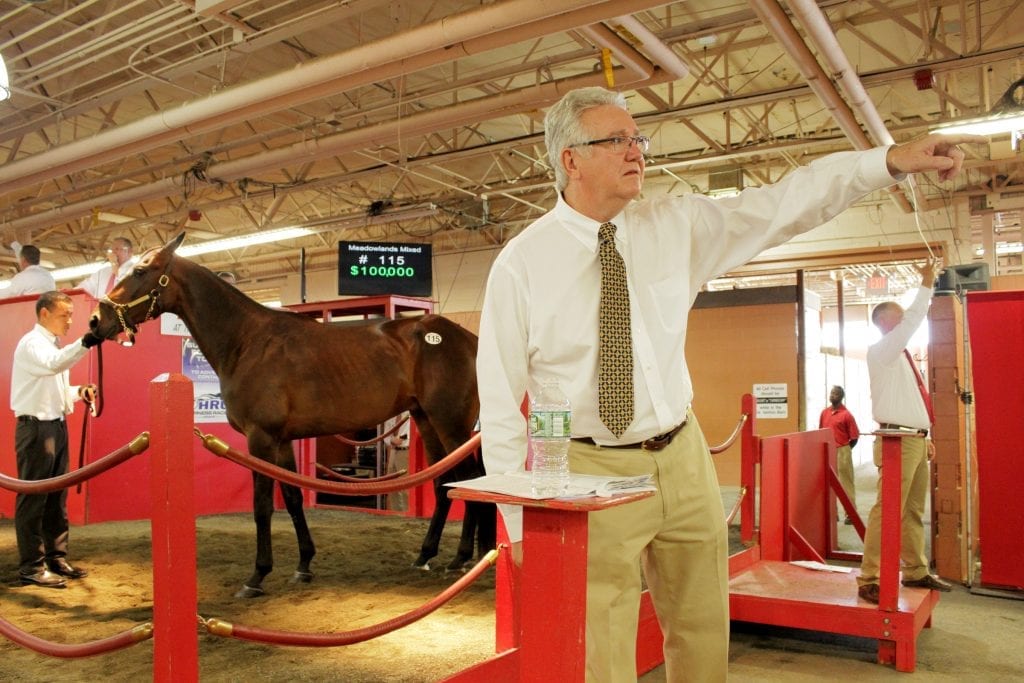 The trainer purchased In Secret for $140,000 Sunday at the Meadowlands.

Ron Burke came to the Tattersalls Meadowlands Summer Mixed Sale with an eye for only one horse — and he ended up getting just what he came for.

Burke paid $140,000 for the 5-year-old trotting gelding In Secret that was the sale topper at the Tattersalls Summer Mixed Sale which took place in the Meadowlands paddock Sunday afternoon, one day following a thrilling Meadowlands Pace night.

By Deweycheatumnhowe, out of Secret Magic and consigned by Preferred Equine Marketing, In Secret has banked over $100,000 thus far in 2017, but it was a fourth-place finish in a preferred at the Meadowlands a few races back that convinced Burke on him. He said, “The mile that he went a couple of weeks ago when he was fifth (placed fourth) at the Meadowlands… he was airborne. And those are friends of mine that owned him and I told Mark (Weaver) that I love him and once Mark told me that he was in the sale today, I knew that was our one horse that we were coming for.”

The likely plan will be for Burke to first race In Secret at Yonkers. She had raced earlier throughout the year for trainer Noel Daley. Burke said, “I think he’s more like a Yonkers open trotter (as opposed to FFA stakes competition). Right now I have Lady’s Dude and I’ll probably move him to Ohio and run this horse at Yonkers in the open trot. They go for $55,000 which is like being in a stake race every week as it is.”

Two other horses managed to reach the $100,000 plateau in the sale. JJ Flynn – a 4-year-old gelding by Western Ideal out of Allamerican Cognac was acquired by Josh Green for $102,000. JJ Flynn will probably surface next at either Chester or Pocono, according to Green. What attracted him to the horse? “He looked like a clean horse. I like that he looked refreshed. I talked to Kyle (Spagnola) who trained the horse at Saratoga and it sounded like the horse just needed a bit of a break and some rest.”

Also purchased for $100,000 was Maxdaddy Blue Chip who went to Rene Allard. A winner on Saturday during Pace night, Maxdaddy Blue Chip was one of eight purchases that an active Allard made throughout the day. Leading all buyers in gross dollars spent, Allard spoke highly of the lightly raced Sportswriter—Ascending gelding.

“He’s a real fast horse. I’ve been watching him since he was a 2-year-old. He’s one of those horses I said that I always wanted to buy if I had the chance to because of his speed,” Allard said.

The 3-year-old Roll With Joe—Bronzer Babe colt Mr. Varsity led the way through much of the sale when he was purchased for $87,000 (fourth highest overall) for Dylan Davis. A bit of a risk for a horse with only eight lifetime starts, but Davis said, “If he doesn’t turn out to be stakes caliber, it still looks like he has a lot of outs with the non-winners at Chester and Pocono… $87,000 is top dollar but he has a lot of options and we’ll see how he adjusts.”

Following Preferred Equine Marketing with upwards of 80 horses sent through the sales ring, Bob Boni’s Northwood Bloodstock Agency consigned the next highest amount in both of horses sold and gross sales. Boni’s top consignment was Guantanamo Bay, who sold for $75,000. “Overall it was a good sale, Boni said. “The horses that come in with good lines and show they can go did well.”

Sale general manager David Reid of Preferred Equine Inc. was encouraged by the results. “Very solid, very good sale,” Reid said. “I was pleased with the results, attendance and pace of the sale.”

He credits the success of the sale to a number of factors. “As we put out our advertising campaign, including what we’ve been doing on social media, we kept stressing the fact that we had so many horses that were currently racing, and racing at high levels,” Reid said. “And I think the higher prices are reflective of the current racing form that these horses have been in, but also based on the graduates that we’ve had from the sale. We can’t say enough that horses come through this sale they do go on and race at many jurisdictions and race well for the owners.”

If there was any slight level of disappointment, it came in the overall number of horses that were offered. While 142 horses sold in last year’s sale, only 106 went through the ring in this year’s sale following the outs. Also, the 2-year-olds that made up the first 17 horses in the sale produced lower prices than 3-year-olds and older horses and it shows that the market in the industry still isn’t there as far as being able to offer quality 2-year-olds to the public. However, as Reid said, “The racehorses are a proven market and it continues to be strong and very satisfying.

“We had a diverse group of buyers today. Obviously Rene Allard led the way, but there were buyers from Delaware, Michigan, western Pennsylvania, Ohio, Canada and New England, among other locations internationally. Overall I was very happy and we truly appreciate everyone’s participation.”