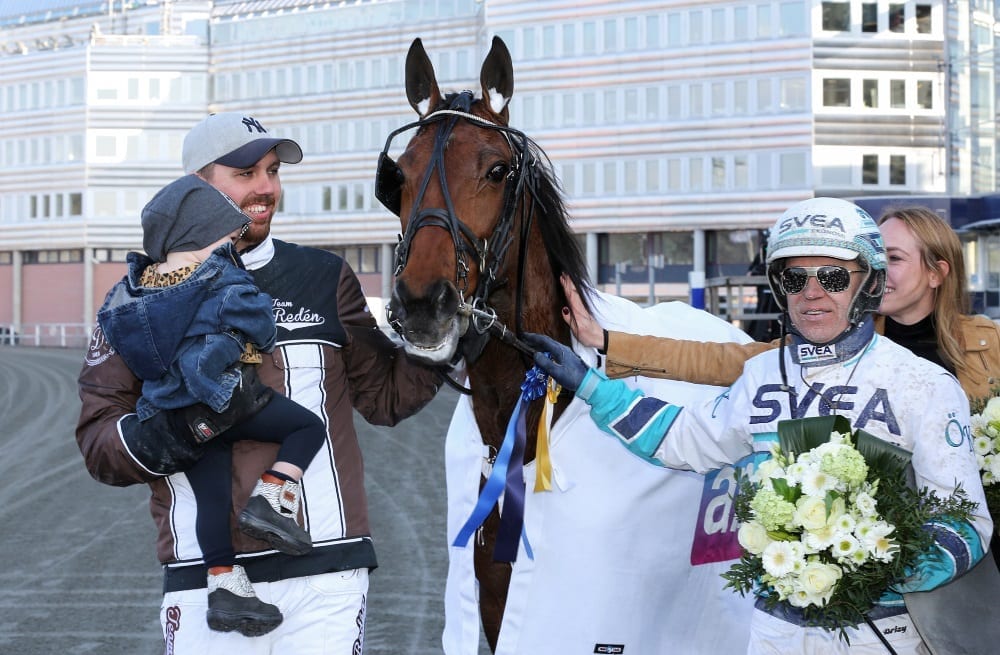 American-bred Delicious has been one of the most popular trotters in Europe since she arrived in Sweden in 2012. Now her racing career is over.

Swedish trainer Daniel Redén has a lot to thank Delicious for after making the difficult decision Thursday to retire her from racing due to a stomach ailment.

The Cantab Hall mare out of Ipsara LB has enchanted the fans in Europe many times and during the summer of 2015 she broke three world records, three times in a row on three different distances on 5/8ths of a mile tracks.

”She is the most valuable horse that I’ve had contact with in my life. Everything about her is so special and she’s a fragile individual that has to be handled with care,” Redén has said many times during the last two years.

The eight-year-old mare was scheduled to race in Årjäng, Sweden, last Saturday. But, at the beginning of this week, her stomach problems returned and on Wednesday evening she had to be taken to the veterinary clinic outside Uppsala, not far from her home in Sweden.

”I was at races that night and couldn’t see what shape she was in, but her caretaker is observant and told me that it would be for the horse’s best if we went to the clinic. Thursday morning I took the car and went to see the horse and it was very hard to look at her lying in the box with all that pain that she had. Her condition was really bad and the worst-case scenario since she came to my stable. I thought it was over, that she was going to die…So, I told her that she will be better when she gets to that other place that we don’t know so much about and then I tried to get home, with my eyes full of tears,” Redén said.

Ron Gurfein trained Delicious in most of her career in USA and for the magazine Sulkysport the Hall Of Famer said:

”Delicious had, in my opinion, the best caretaker in USA. Lisa Palmiter doesn’t take care of horses, she adopts them and do you know what’s strange? I’ve sold a lot of horses that Lisa took care of and hardly anyone of them have worked out afterwards. Delicious is one of the few horses that have been good and that’s why I can understand that she is in a stable where the trainer is nice and good to her,” Gurfein said.

Redén, who also named his daughter after his favourite horse, bought Delicious in Harrisburg when the horse was three-years-old. The price was $100,000.

”Horses are like humans, you walk into a room and get this feeling. Is it a good or a bad human? I directly felt that Delicious was special and I know I was right about that,” Redén said.

But every fairytale has an end and the story about Delicious is over, at least concerning her career on the racetracks. Her bowels are damaged and that is something that Redén has had in mind for two years now. To get an understanding what’s bothering the quick mare, one can compare her sickness to Crohn’s disease, a type of inflammatory bowel disease.

“I just waited for that call on Thursday afternoon and when the veterinary called I was prepared for the worst. But he had some good news. The surgery went well and they found another problem with the bigger bowel in her stomach. The vet could fix that, but now we have to wait and see how she reacts when she’s going to eat by herself. So far she hasn’t got much food at all and we try to communicate with the veterinarian as often as we can, just to get to a point where we can find a solution for the horse. Right now I’m just so happy that she is still alive. The critical moment is not yet over, but we pray for her. It would be the most fantastic thing if we can arrange so that she can be a mother some day,” Redén said.
Delicious won in world record time of 1:50.2 in August, 2015. Two weeks later, she won in 1:52.3 in two 5/8ths of a mile and soon thereafter she won in 1:56 in 2.5 5/8ths of a mile.

The Jerry Riordan show in Scandinavia

To honor Thoresen, his home track Jarlsberg arrange the Memorial every year in the beginning of July and the race has shifted shapes during the years. For many years, the race was open for the three-year-olds, but now the elite competes at the track in the beautiful village of Tönsberg in Norway.

Thoresen was by many considered the best harness racing driver in the world and for the American spectators he presented himself with two upset winners in the USA in 1986. Habib won the International Trot and Nuclear Kosmos the Hambletonian, both horses with Thoresen in the sulky.

The Norwegian top driver sadly passed away in 1992.
Italian bred Twister Bi, who won Oslo Grand Prix in Norway four weeks earlier, showed no mercy when he was alone in the home stretch for Christoffer Eriksson. From post position two, Eriksson made his move when quick starter Oasis Bi came to the lead shortly after the start. Twister Bi was in front after a quarter of a mile and 30-year-old Eriksson proved again that he is the new super driver in Scandinavia. Twister Bi and Eriksson made it difficult for the opponents when they successively sped up the pace in the lead.

With a quarter of a mile to go in the two 5/8ths of a mile race, Twister Bi left the field and disappeared to the victory in 1:53.2 as approximate mile time.

”I was a little surprised after Oslo Grand Prix, but the horse is super good and I had good feelings before the race. Twister Bi is getting better for every start, more mature and it didn’t cost too much to get the lead. I like it when the horses run in an even tempo, like this time and when Christoffer pulled the earplugs, the horse exploded,” Riordan said.

The victory was worth $90,000 and Riordan was satisfied not just with Twister Bi last weekend. Ringostarr Treb came to his stable after Sweden Cup at Solvalla in the end of May and in the first start for Riordan the horse made the impossible possible. In a race over two 5/8ths of a mile, the son of Classic Photo made a break in the lead after 250 meters and was later in the race seen at the last position. After an incredible finish, Ringostarr Treb won in 1:53.2 and the spectators could not believe what they had witnessed.

“Twenty-seven years ago, I saw something that I can compare to this and it was when Embassy Lobell won a race in the beginning of his career. But that was in a low class and Ringostarr Treb did this among many great horses. It’s rare to see something like that”, Jerry Riordan said.