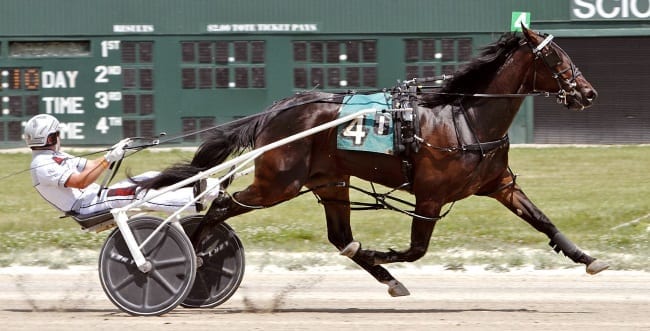 Harness racing is a family affair and nothing brings a family closer than a swift two-year-old. For the Smith family of Washington Court House, OH, their speedy pacer is a homebred by the name of Letsallrock.

Letsallrock is the first foal out of the Jenna’s Beach Boy mare, Noseitall, who took a mark at two of 1:57.1 and earned $7,605 in just 15 career starts under the watchful eye of trainer and patriarch, Jeff Smith.

“She was second over in the last turn (at Indiana Downs) and there were geese on the track,” said Jeff Smith. “Several horses broke and she put her foot in an arch and ripped her tendon.”

Noseitall’s racing career came to a bittersweet end, but her relationship with the Smiths continued
in the breeding shed.

“We co-owned the mare with Walter (Fister),” said Smith. “He had a number of mares and didn’t want her, so I decided to take her.”

Jeff Smith sent his pupil out for his first qualifying effort on June 19 at Scioto Downs. Letsallrock was eased off the gate and went to the back of the field of eight and was 12 ½ lengths off the lead at the half mile station. Their oldest son, Tyler Smith, moved the bay colt off the rail and made up 9 lengths in the last half to finish fourth, timed in 1:58.1.

He qualifyed the following week with a slightly different racing style. Leaving from the rail, Letsallrock sat third early, took control of the field before the half, cruising to a 2 ¾ length victory in 1:56.1.

With two solid qualifying starts under his belt, Letsallrock was ready for the opening leg of the Ohio Sire Stakes (OHSS) for two-year-old colt pacers on the Independence Day matinee card at Scioto Downs.

Sent out as the luke-warm favorite by the bettors, Letsallrock sat third early and brushed by the pacesetting Stark Hanover (Dave Palone/Ron Burke) before the three-quarters in 1:24. He sprinted clear and used a :28.3 last panel to score the three-length win.

The finishing time of 1:52.1 established a new track record and set a national season’s record.

As the pair returned to the winner’s circle, smiles were aplenty.

“A little bit of it was shock and a lot of it was excitement,” said Smith. “It was great having Tyler driving him and the family in the winner’s circle.”

The Smith’s youngest son, Trevor, started driving in 2015 and had seen more even more bike time in 2017. The 21 year-old has been doing a lot more of the training assignments for the Smith stable, including Letsallrock.

The elder Smith knew he had a quality colt from the start.

“To tell you the truth, you could tell Letsallrock was going to be a good one by the way he did everything. He glides over the track. He’s relaxed on the track,” said Smith. “He may never win another race, but he is the best one I’ve trained in 47 years.”

The second leg of the OHSS is Saturday, July 22 at Cleveland’s Northfield Park, known for its sweeping turns and short stretch.

“I want to save him for next season. Maybe seven or eight starts this year,” said Smith. “He has the sire stakes, (Ohio) State Fair and Delaware (Ohio Breeders Championship).”

There is another race at the Delaware County Fair that the Smith family really has their sights on, the Little Brown Jug.

“I want him to come back strong at three,” said Smith. “I have never had one come out of the Jug Barn. I don’t care if I finish last. I just want that thrill.”