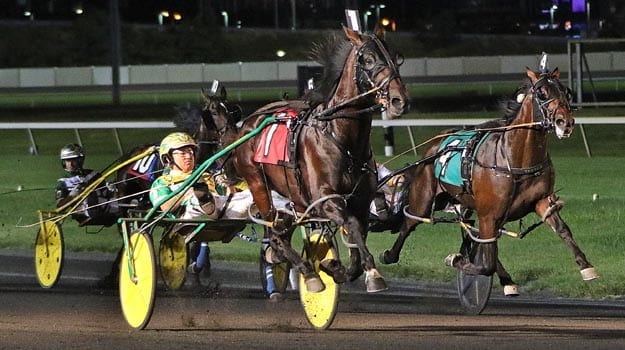 Will Huntsville capitalize on Dragon’s absence in the Pace?

Despite Fear The Dragon being ranked overwhelmingly at the number 1 spot in the current Hambletonian/Breeders Crown poll with Huntsville down in the sixth position, I’m not so certain that Huntsville wouldn’t be the race favorite had these two been able to square off once again head to head in the Pace. Fear The Dragon is two-for-two this year against Huntsville, but one gets the impression that the public regards Huntsville as the classier horse.

Trained by Ray Schnittker, Huntsville prepped in style last week to winning his Pace prep effortlessly and don’t forget that he won last year’s Breeders Crown over the Meadowlands surface as well. Fear The Dragon is unproven at the Big M and that might have counted against him.

Without Fear The Dragon, the race is clearly Huntsville’s to win or lose. It also shines the spotlight back on Huntsville and Downbytheseaside, which was the main rivalry we thought we’d be seeing at the beginning of the season.

No one came close to touching Huntsville last week and his connections raced him last week in order to pick their post position for the Pace final. Huntsville seems to tower over most of these in terms of class and current form and while Downbytheseaside did best his rival one time last year, his current form is more questionable.

The drivers of these top two contenders – Tetrick and Sears – have combined to win six out of the last 11 editions of this race including three out of the last four years and something unforeseen would have to happen for one of these two not to win it this year. Tetrick also teamed up with Schnittker to win this race together in 2010 with One More Laugh.
In a race that has been very kind to favorites over the years, Huntsville should be able to get the job done with relative ease.

Will the Stanley Dancer be a Hambletonian preview?

Following his upset win two weeks ago in the Earl Beal at Pocono, I asked Andy Miller who co-owns and drives Devious Man if he thought his colt could go with the likes of Walner. As it turns out, we won’t have to wait long to find out.

Devious Man and reigning divisional champion Walner will square off in the first of two Stanley Dancer divisions and will start right alongside each other in the race.

Walner crushed inferior foes in a race that was set up for his return and now returns to stakes action in his second start back. That 1:51:2 qualifier a few weeks ago in a monsoon was something else and his mile last week was giant. Devious Man did trot right in behind Walner in a qualifier back in May and the post edge over that rival in this race may help.

There’s no question about the strategy for Devious Man and we’ll see how good he is as his encore to the Beal. Walner will once again be an overwhelming favorite and a deserving one at that; a physically imposing animal.

Lady Shadow remains perfect on the year at five-for-five but had to dig down for that win last week and now lands the outside post in a field of 11 horses. I looked foolish in picking against her in the Roses Are Red, but this spot looks even tougher. She won this race last year in record fashion at the added distance.

Pure Country comes into the Golden Girls off a dynamic 1:48 qualifying win – the fastest qualifier in the history of the sport! And that was a Meadowlands Pace finalist that this 4-year-old mare left in her wake in that qualifier, too. Trained by Takter, she’s been a bit of a tough luck horse so far this year but looks bound to attract attention tonight from the rail; let’s see if she’s this good right now with the money on the line.

Nike Franco N closed in :26 last week but still couldn’t reach Lady Shadow; she’s bound to finally get the better of that rival one night. Penpal rates an outside chance if the race sets up for her, but her conservative approach always puts her at the mercy of others. Pure Country gets my call.

Can Mr. Julian handle the eight steps up in class?

Last week $7,500 claimer Mr. Julian paced a winning mile in 1:48:4 for trainer Vincent Fusco and I’ll need Bob Heyden to confirm but I’m almost certain that’s the fastest mile ever paced in history by a horse in for that low of a claiming price.

He was claimed out of that race and new trainer Jason Johnson moves him away from low claimers into this far tougher group of conditioned foes and we’ll see how it all works out. Tetrick opted off too, which probably isn’t a good sign.

How do we handicap the Haughton?

This race is completely wide open and I’m inclined to take a stand against the top two morning line choices. Favorite Mel Mara (3-1) is always put on the front as speed is his game but I’m anxious to see how Callahan accomplishes that from post 12. Boston Red Rocks is a 4-year-old facing many of these who are more seasoned and he’d have to prove it to me that he can beat the likes of some of these prior to me backing.

The first thing that caught my eye was that Dave Miller was listed to drive Mach It So instead of regular driver Tetrick, and Miller went with that horse for Bamond Jr. over the Silva-trained Dealt A Winner. All Bets Off and Clear Vision who has found the fountain of youth at age 11 both could feature prominently as well.

This is the easiest question in here, and the answer should be ‘yes.’

In the Del Miller, Ariana G returns back to racing against her own kind after a tough first over grind in the Beal at Pocono against the boys. She’s dominated this group throughout the last year although Rod Allen’s Dream Baby Dream could pose some type of threat; trotted a storm in the final quarter of her race two back.

Marion Marauder picked up last week in the Graduate right where he left off here last year when he won the Hambletonian. The Triple Crown winner looks to be already be in mid-season and it would take a big mile from someone else to beat him in the rich $458,750 Hambletonian Maturity. I’d keep an eye out though for Taco Tuesday. Jim Morrill is in town to drive that one who also gets a barn change to Buzzy Sholty who has been a recent topic of conversation of late; those recent Q’s look awfully good.