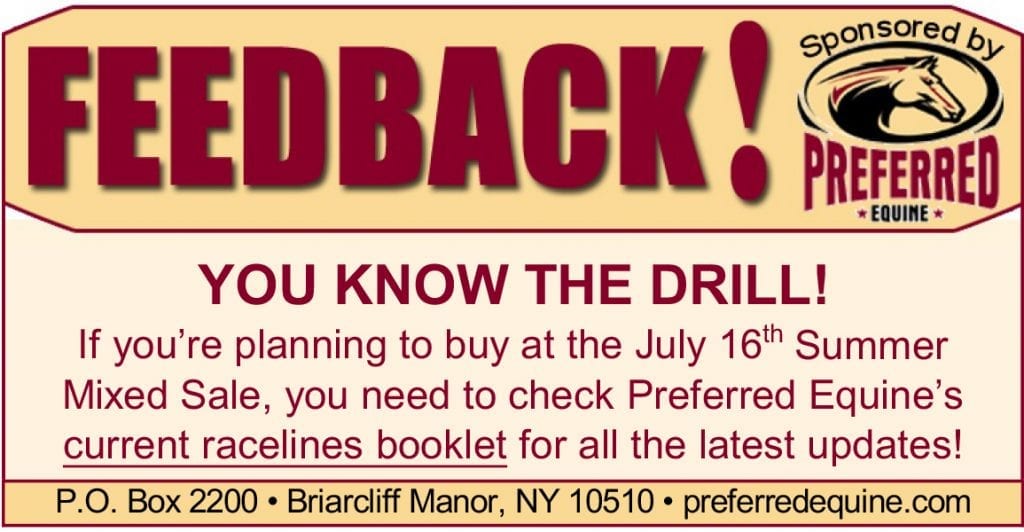 Trogdon is off base

Jeff Gural’s 150 mile rule (full story here), while not perfect, was made and is enforced in the best interest of harness racing and Bruce Trogdon knows it.

For a breeder, who openly admits he culls out the ones he thinks are “special” and sends the rest to market to be whining about rules that are in place before he makes their stakes schedule is ridiculous. If he thought the horse was so special how do you not stake him to the Meadowlands Pace (and make his stakes schedule accordingly) then complain about the rules because they don’t serve your particular interest.

Trogdon’s implication that east coast horseman are less concerned about the well being and safety of their horses is both off base and offensive. Trogdon’s attack of Jeff Gural is baseless and unwarranted especially when you consider that Jeff has done more positive things for the industry than anyone I can think of. It next to impossible to make perfect rules that serve every interest equally but clearly he’s trying. Furthermore, if you disagree with a rule and believe a modification would serve the industry as a whole, the time to petition for the change is prior to the season start not half way through the year.
Murray Brown’s comments regarding supplemental entries should be given more consideration.

As my previous opines have noted, Mr. Gural is a lightning rod for controversy. However, in the case of Fearless Dragon and his owner, Mr. Trodgon, forgoing supplementing to the Meadowlands Pace, Mr. Gural really did nothing wrong. Whether or not the policy is biased towards locally stabled horses isn’t my issue. That’s for a later date when changes can be made. Mr. Trodgon has the right to do whatever he feels is in the best interest of his champion. However two things bothered me. First, the policy about where the horse had to be stabled, I assume, was known for quite some time. Thus, it shouldn’t have been a surprise or uproar that his horse had to abide by the policy. Second, and most importantly, there was no reason for Mr. Trogdon to attack the Meadowlands, especially before their signature race. Mr. Trogdon mentioned racing Fearless Dragon for the “good of the sport.” If that’s true, he should not have taken attention away from the race and trashed the track as a B track when it’s so obvious to everyone that the Meadowlands is competing with slot filled purses at tracks that combined don’t handle a fraction of the Meadowlands. The race classes might be B, but the handle proves that people want to and feel safe playing the Meadowlands over bloated purses at track infested with boring racing and chemical enhanced super horses. I feel that after Mr. Trogdon couldn’t convince Mr. Gural to alter the policy, he should have just said that he was waiting for the Adios since the horse would have to be supplemented to the Pace, he and his wife married at the Adios, and the horse had run many weeks in a row. No one would have faulted him for that logic and looked deeper. After the race was run, then Mr. Trogdon could have voiced his concern over the policy. It would have given them three weeks to see if they could work out a compromise for the Cane on Hambo Day. Plus, it would not have taken away from the Meadowlands Pace. Overall, I wish success to both parties in the future. Fearless Dragon is a beautiful animal and wish him and his owner the best of luck over the season even if we don’t see him on Hambo day.

Finally, I stand by my recommendation that the passing lane be “shortened” not eliminated all together. Starting the passing lane at the top of the stretch is too advantageous to the pocket sitter. However, if the lane doesn’t appear until closer to the wire, it still gives the pocket sitter a chance, but also forces the driver to assess the strength of the front running compared to the outer flow.

Close up the passing lanes

Per the recent John Kopas quote, “Anybody out there besides me that thinks passing lanes should be done away with?” (full story here) here is one view from one bettor’s perspective: The passing lane hurts the bettor who pays attention. I could go into great detail as to why this is true, but here are a few simple examples. With the passing lane, an educated analysis of the chart is frequently enough for an educated decision. For example, 95+ per cent of the time, the pocket horse had a clear shot to win if the winner went wire to wire and there is a passing lane. Without a passing lane, unless the first over horse is gone before the stretch, you have had to see the race to know for sure. Or would you know for sure?

“He never would have won even if he had gotten out.” “He was the easiest kind of winner if he had clearance.” Those two quotes are common chatter among handicappers when talking about the same race. The lack of a passing lane adds to the juice. The lack of a passing lane increases the bettor’s need to WATCH races, and to return when they see something “that nobody else did” for a future bet. So, yes, close up the passing lanes and bring back the intelligent bettors. I believe the elimination of the passing lane would also greatly reduce the number of prohibitive favorites in cheap races. A $5k claimer with speed is a safer bet with a passing lane. The driver is less likely to keep the safety of the pocket when on an odds-on favorites, and two moves to the top by cheap claiming horses is a lot riskier bet.

Sturman weighs in on passing lanes

As Mr. Barnsdale stated in his Buzzworthy column this week, (full story here) the passing lane debate is one that will never go away. But regardless of where you stand on the issue, the two examples cited as reasons for the most recent debate are really bad ones. Both Keystone Velocity and Devious Man earned their wins — Barnsdale even concedes that — so where is the debate in these instances? Keystone Velocity who has already won the Levy this year, parked out two horses at the start of the race, yielded to one and then re-took before finally sitting the pocket. He was able to beat a horse in Mel Mara who is very fast but that everyone knows has a tendency to slow up at the end. It was a brilliant drive by Simon Allard. Similarly, Devious Man blasted out from post 7 and earned his way to a pocket trip. How is it his or driver Andy Miller’s fault that he was able to land that type of trip while starting from post 7. The bottom line is that both of these horses were very good on that night and were completely deserving of those wins, passing lane or no passing lane.