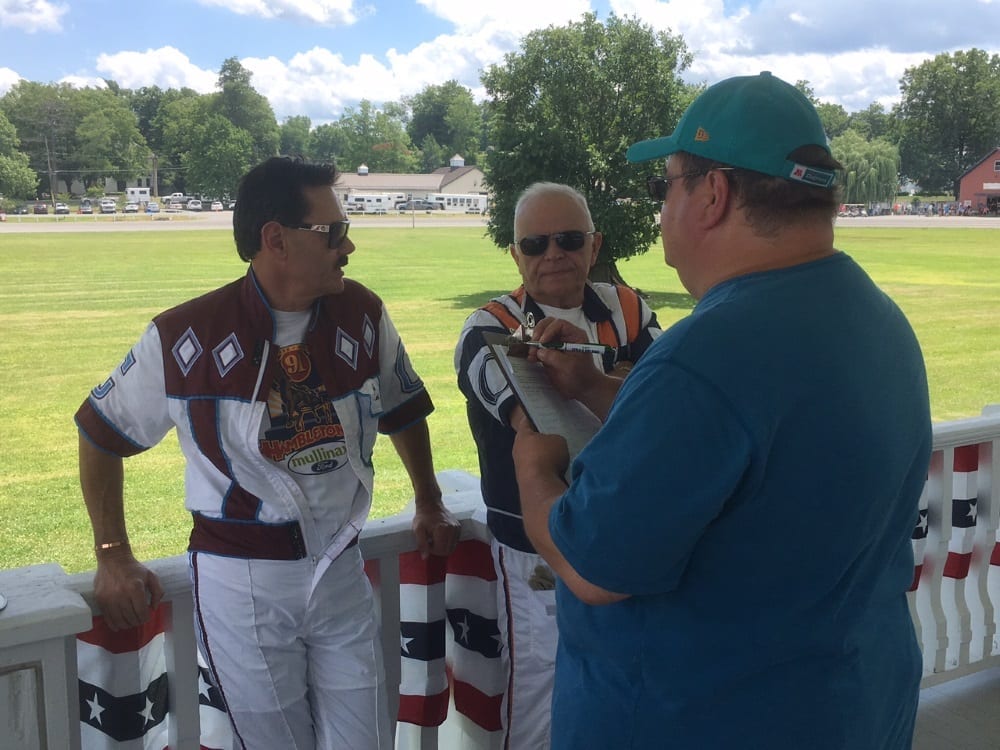 The two old friends and one-time fierce rivals remember their 10-year war at the Meadowlands as they wind down their driving careers together.

The Mets and the Yankees. The Canadiens and the Maple Leafs. Muhammad Ali and Joe Frazier. These are some of history’s greatest rivalries where one had to choose one side or the other.

But what about a rivalry where you could switch allegiances every 20 minutes, if you so desired? During the 1980s, the Meadowlands’ driver colony had one that fit the bill perfectly, as John Campbell and Bill O’Donnell waged a 10-year war where the sport and its fans were the big winners.

Campbell arrived from Windsor at the urging of racing secretary Joe DeFrank in 1978, while O’Donnell, who had raced on the New England circuit as well as at Saratoga, arrived one year later, and actually got the better of his primary foe for the first half of the decade.

“I went down there to race in the summer of 1979,” said O’Donnell. “I took some horses down. Everything fell into place. John was going good then. He won race after race after race. He was a young guy and he was tearing the place up.”

“What a great driver he was,” said Campbell of O’Donnell. “That spring and summer he came down and did really well. So it caught my attention. 1980 is when we really went at it. Then we exchanged driver titles at the Meadowlands through the ‘80s.”

“Always. All the time,” said O’Donnell of how aware one had to be of Campbell. “He had the great ability to put you in a bad position. You were on defense as well as offense all of the time.”

“You were always looking for the guys with the horses to beat,” said Campbell. “Billy and I were getting good horses, so you wanted to get your horse into the right spot. But you couldn’t forget about the other eight guys, either.”

As I continued to interview the Dynamic Duo 30 minutes before they would meet in the Hall of Fame Invitational Trot at Goshen Historic Track on Hall of Fame Day Sunday (July 2), the conversation shifted to how racing has evolved.

“When I started at the Meadowlands, if you went to the quarter in :28, you were done,” said Campbell. “Now, as long as they get a rest for an eighth of a mile, they can still keep going. Even when they are tired, they keep going, which makes it difficult for closers.”

“It’s changed so much,” said O’Donnell. “In those days, the first quarter, you jockeyed for position early. Let this guy go, let this guy in. I always tried to be second or third over. I preferred to be third over. Second over, you burned up too much gas. There was a lot of movement down the backside. Even if a horse had speed, I would take him back and try to race him from off the pace.”

Remarkable when one considers how many races are won now on the front end.

The pair was obviously aware of the rivalry, but there was never any malice. Even if the other guy had won the previous meet.

“You wouldn’t think about that,” said Campbell. “But everybody wants to be number one. No doubt about that. But it wasn’t something I would dwell on.”

“I was glad to be there and doing well,” said O’Donnell. “I don’t think either one of us worried about that. There were a lot of good trainers to drive for and we drove a lot of good horses. Being number one wasn’t a big priority. Not at all.”

Listing all of the pair’s great horses would be a long one, but they each have a soft spot for one.

“Mack Lobell,” said Campbell. “He’s the greatest horse I’ve ever driven. We put so much pressure on 2- and 3-year-olds then. He went over and won the Elitlopp at 4 and is still the only 4-year-old to win it. Then he went back and won it again at 6. We raced him hard. He was a freak of nature.”

“Without a doubt,” said O’Donnell. “The best horse I’ve ever driven is Nihilator. He was just a great horse. He was aggressive at the gate but he got so you could take him back easily. I was always concerned that he’d get too hot. But at the quarter pole, he’d settle nicely.”

Sometimes in rivalries, the expected outcome is anything but. Take the 1987 Kentucky Futurity for example. Mack Lobell was the one to beat, but O’Donnell and Napoletano got the win.

“No, I have no resentment for Billy,” kidded Campbell. “But it was one of the toughest losses that I’ve ever had. (Trainer) Chuck Sylvester and I were devastated. Mack was good that day. No excuse. We just got beat. I don’t think there was anybody at The Red Mile who thought Mack would lose – myself included. Napoletano was just sensational that day. He just came and trotted right by Mack Lobell.”

“Napoletano had won the World Trotting Derby,” said O’Donnell. “He was good right then. He was ready for the two-heat stuff and was really sharp. But after that, he never beat (Mack Lobell) again.”

Two years earlier, in the Breeders Crown 2-year-old colt pace at Rosecroft Raceway, it was Campbell getting the upper hand, defeating O’Donnell and favorite Barberry Spur with Robust Hanover.

“I went to the front and thought it would be a cakewalk,” said O’Donnell. “But John went to the lead. I let him go, figuring I would go right by him late… But I didn’t.”

The rivalry was never combative.

“It was always friendly,” said O’Donnell. “It was competition. People seemed to like it and that’s what it’s all about, bringing people to the track.”

“I was lucky enough to do for a living what I had dreamt about as a kid,” said Campbell. “It’s a blessing when you can do that. As far as Billy is concerned, we went at it really hard, but what came out of it was a lifelong friend.”

Both seem more than ready for life outside of the sulky.

“John is retiring today,” said O’Donnell, who for the last eight years has served as president of the Central Ontario Standardbred Association. “I’m quitting. I’m all done. I drive once or twice a year. It’s fun. But physically you feel it.”

“This is an opportunity (to become president and CEO of the Hambletonian Society) that came along at the right time,” said Campbell. “There’s going to come a time when I can’t drive. That’s going to be sooner rather than later. I know that for a fact. I think I pushed this age limit as long as I can. I don’t want to be pushed out. I’m very content.”

In the Hall of Fame Trot, the last American appearance for both, Campbell worked out a second-over trip from post eight while O’Donnell (post seven) went third-up. Campbell got the win while O’Donnell settled for third.

“He’s just one of those guys,” said O’Donnell. “He did not have the best horse (Pig Hunt) in there but he has the uncanny ability to get it done.”

July 30 will be the last day for both in the sulky, as they will go at it on Legends Day at Ontario’s Clinton Raceway.

Campbell got the best of O’Donnell at Goshen. Will Billy O get some revenge at Clinton?