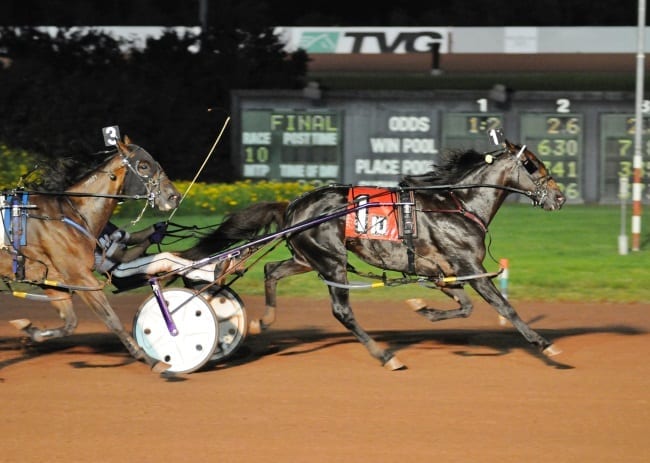 Tired after winning the Pepsi North America Cup at Mohawk, the sport’s top-rated colt rebounded to win the Max Hempt Memorial at Pocono.

Trainer Brian Brown said Fear The Dragon was worn out after winning the $1 million Pepsi North America Cup on June 17 at Mohawk Racetrack. So, after finishing second last week in his Max Hempt Memorial elimination at The Downs at Mohegan Sun Pocono, Brown breathed a sigh of relief when the colt returned to form in Saturday’s $500,000 final.

“After the Canadian race, he did come out of it pretty tired. So, I gave him a pretty easy week that week. He scoped bad after last start, then, this week, he scoped good and he had a pretty good week,” Brown said. “He got turned out at (owner) Bruce (Trogdon’s) farm (in Ohio) for a couple of days. He jogged there one day, so he got to rest up some and it really helped him, both getting the throat cleared up and the time in the field. It perked him right up and he trained better this week.”

Fear The Dragon and David Miller won the Hempt final by three-quarters of a length over Funknwaffles in 1:49.3. Donttellmeagain finished third and Miso Fast, who defeated Fear The Dragon last week, was fourth in the race for sophomore pacing colts.

“I was nervous about coming (to Pocono) after the North America Cup, which was tiring for everybody,” Trogdon said. “But we decided to stick to the schedule. Last week, you know, it was just the way the race went. David loves the horse so much and he was just trying to protect him, and Miso Fast was just (great). I knew Miso Fast is a nice horse, but we still had the earplugs in. I don’t want to take anything away from Miso Fast, he was big last week.”

Miller said Fear The Dragon, “laid down for a couple of days, didn’t have much energy” after the NA Cup and “had to get right back on the trail and ship out (to Pocono). He was a bit tired, but tonight he was acting like himself right off the bat and surely raced like it.”

Fear The Dragon, the 1-2 favorite from post one, enjoyed a second-over trip up the backstretch behind Miso Fast and made a three-wide move on the final turn before taking the lead from stablemate Downbytheseaside in the stretch. Funknwaffles, at 23-1, and Donttellmeagain, at 24-1, made late charges to claim the next two spots.

“The trip just worked out that way,” Miller said. “I thought there would be a few more guys leaving, then we’d have been in trouble.”

Downbytheseaside raced hard from post eight in the opening quarter-mile, finally wrestling the lead from Santafe’s Coach in a :25.4 panel. Downbytheseaside remained on top until the last turn, when Miso Fast put his head in front just after reaching three-quarters in 1:22.2.

“I thought that off the rail as long as he didn’t get in any trouble early he would be in great shape,” Brown said. “He loves to come from behind and David had his choice of where he wanted to land, and he landed in the perfect spot.

“The speed hasn’t been great tonight and when my other horse (Downbytheseaside) gets parked a quarter in :25.4 that was enough to do him in. That pretty much set the whole thing up for Fear The Dragon.”

Fear The Dragon has won seven of eight races this year and earned $711,953 for Trogdon’s Emerald Highlands Farm. Last year, the colt won five of 11 races, hitting the board a total of 10 times, and earned $228,391.

“I think he was this good last year and nobody knew it,” Trogdon said. “If you look back at his races, he was the best. When he beat Huntsville this year, they interviewed me and said, ‘Wow, do you believe that?’ I said, ‘Well, yeah, we beat him twice last year.’ I always knew that because I watched the races. I have a ton of respect, Huntsville is a great animal and so is Downbytheseaside. I knew how great they are, but I also knew that Dragon was at their level.”

“Raising him up he was always special,” Trogdon said. “I normally don’t keep that many colts, but I had a few nice ones and he was one of my favorites all along. It’s kind of been a dream come true.

Fear The Dragon, currently the top rated horse in the weekly Hambletonian Society / Breeders Crown poll is not eligible to the upcoming Meadowlands Pace and Brown said it was unlikely the colt would be supplemented.

“We’re 99 per cent sure that we’re going to give him the next two weeks off and then head to the Adios,” Brown said.

“I knew when we set up the schedule at the beginning of the year,” Trogdon said, “that we would go to the North America Cup and then here. My wife and I got engaged at the Adios, so that was on my list. The way the schedule is set up, you have to have a break somewhere. That’s the way we had done it.”

In the $75,000 Hempt consolation, Heaven’s Gait grabbed the lead with a first-over move just prior to the halfway point and remained on top from there, winning by a neck over Every Way Out in 1:50.4. Summer Side finished third.

Miller drove Heaven’s Gait, the 6-5 favorite, for breeder/owner John Cummins and trainer Nicholas DeVita. Heaven’s Gait is a son of Rock N Roll Heaven out of the mare Booya Beach. He has won four of nine races this year and earned $80,285. For his career, the colt has won six of 14 starts and $97,235.

– with files from Ken Weingartner