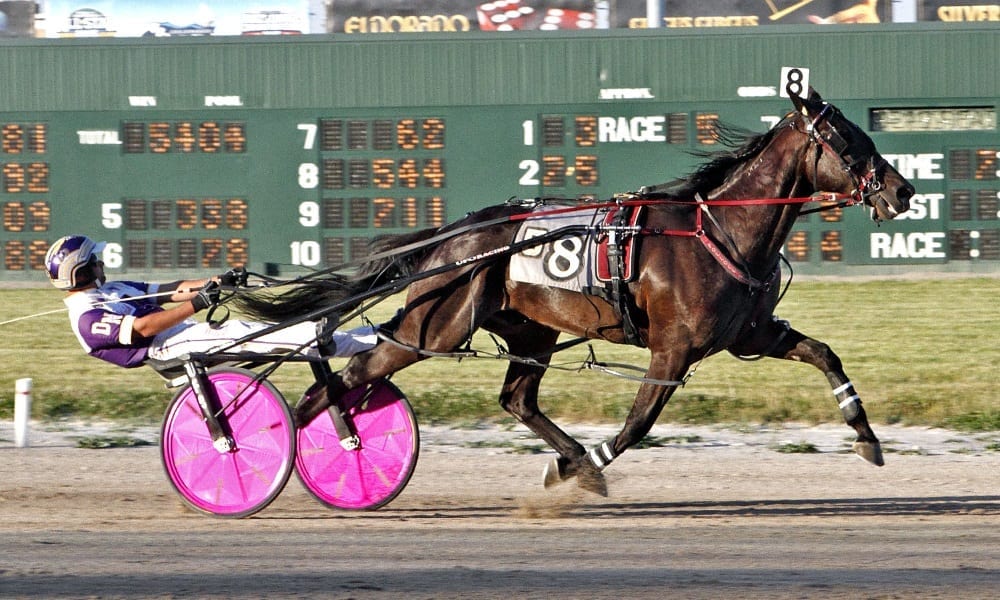 Drunk On Your Love pays dividends

Sophomore has earned $123,500 in just 11 career starts for Mark Ford and Jason Settlemoir.

When the third leg of the Ohio Sire Stakes (OHSS) for sophomore colt pacers in held tonight at Northfield Park, the first $40,000 division will be headlined by current OHSS points leader, Drunk On Your Love.

Drunk On Your Love is the Foreclosure N–Western Show gelding owned by Mark Ford and Jason Settlemoir, the Ohio native and current general manager of the Meadowlands Racetrack.

Ford purchased Drunk On Your Love in January and added Settlemoir as a partner in early May.

“I told Mark a while back that I would enjoy owning part of a horse or two with him. I have known Mark for several years,” said Settlemoir. “Mark called me one morning and we were talking about this horse and he asked me if I wanted a piece of him and I did a little research and opted in on him.”

Drunk On Your Love comes into the third leg of the OHSS with wins in four of six seasonal starts and $53,500 in seasonal earnings. He is trained by Jim Pollock, Jr.

“(Jim’s) another reason I jumped at the opportunity to buy part of this horse,” said Settlemoir. “Jim has always been good to me and I have always considered him a friend. I use to go to the Delaware County Fairgrounds and jog and train horses with Jim… He has always had a great attitude about life and is a hardworking, good solid horseman.

“Jim launched my short lived amateur driving career by getting me ready jogging and training horses. I drove a few times, won my first start, was third in one and won another one. I have always liked Jim and his family, they are good people.”

Despite living in New Jersey, Settlemoir was able to see his purchase’s first start and victory in person (May 27). He was forced to watch Drunk On Your Love’s next start (June 10) while at work.

“I watched from the mutuel office at the Meadowlands,” said the Newark, OH native. “I think the entire bottom floor heard me rooting for him. Several members of my family ventured over to Scioto Downs that night to see him race and I was happy to see them in the winner’s circle.”

Drunk On Your Love was bred by Harold Lee Bauder and Harold L. Bauder and was sold as Sectionline Go Go at the Blooded Horse Pre-Jug Sale in August 2015. Tony Dinges bought the pacing colt (hip #189) for $5,500.

Dinges put the colt through his early lessons and qualified him in 1:58.3 at Tioga Downs, winning by 21 lengths.

His first charted line was impressive enough to land the freshman in the barn of trainer Jim Dailey for new owners Josh Green, Melanie Atley, Carl Atley and Richard Lombardo.
Drunk On Your Love made his first pari-mutuel start in the opening leg of the Ohio Sires Stake at Scioto Downs on Independence Day. The gelding went gate-to-wire in 1:54.3. The following weekend he took the second OHSS leg in similar fashion in 1:56.1 at Northfield Park.

The third $40,000 leg was contested on Aug. 16 over a sloppy Scioto Downs surface. Drunk On Your Love scored a neck victory in 1:55, running his record to three-for-three.

He tasted his first defeat in the final OHSS leg at Northfield Park when he was edged by a neck by Ron’s Pro. Despite the loss, Drunk On Your Love had secured enough points to ensure a spot in the $250,000 Ohio Sires Stake Final.

Leaving from post four, regular pilot Dan Noble sent Drunk On Your Love after the early lead and led the field of eight past the three-quarters in 1:24. He tired the last quarter and faded to seventh, eight lengths behind stablemate, Scotch McEwan.

Drunk On Your Love finished his freshman season with three wins and $70,000 in just five starts.

“I am familiar with most of the trainers and drivers (in Ohio),” said Settlemoir. “I know Jim Dailey is a very good trainer. He works hard and puts the miles in all his horses, so I knew (Drunk On Your Love) would have a good foundation in him. I like the Ohio program and happy to see the success Ohio is having.”

Drunk On Your Love is expected to stay in the Buckeye state for most of the year.

“He’s staked to a couple races towards the end of the year, I believe the Monument Circle in Indiana and the Matron in Delaware,” said Settlemoir. “One race at a time, but it’s been fun so far with him. I just enjoy seeing him race well and stay sound. Having a horse with two friends, Mark and Jim, is fun and entertaining.”