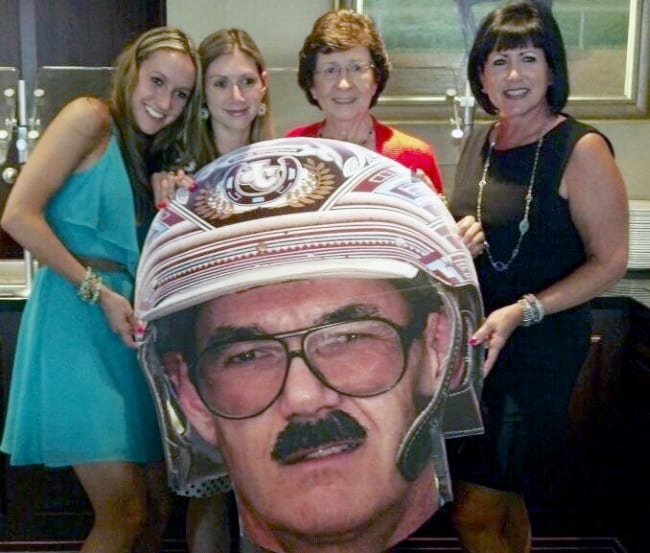 Behind every great man…

Tonight, when John Campbell drives for the final time at the Meadowlands, it will also close a major chapter in the life of his wife, greatest fan and biggest supporter, Paula Campbell.

Driver John Campbell may be harness racing’s money king, but his queen believes she holds a record that will tough to beat. Paula Campbell is confident she has seen more races than any driver’s wife in the history of the game.

Considering how instrumental Paula has been to John’s career, it is poetic they will go out together like this — him touring the famed East Rutherford, NJ oval one final time in his crisp white, maroon and blue colors; her watching from her usual perch at her table in the clubhouse.

She said there will be less stress and worry about John being injured, for one. But, more importantly, Paula is as much a competitor as her husband — which is saying something. As his number one fan, it’s been tough watching him drive less powerful stock after a stellar 45-year career spent almost entirely at the top.

John said Paula’s incredible support has been instrumental in his $299.9 million in purses, 10,665 wins, a career UDRS of .299 and his recovery from several racing accidents.

“I can’t stress enough how supportive, understanding and patient she has been. And when I went through my injuries, I can’t tell you what she meant to me… getting the proper care, making sure I was looked after in the hospital. It was just amazing,” John said. “You have to be such a giving person. I’ve told her so many times that I hope she doesn’t get in the position that I was in. I’d love to give back to her the things she did for me, but I don’t think I have it in me to be as giving and knowledgeable about the proper medical care.”

Paula’s love of the game is a huge asset, John said.

“One thing that has been huge for me is that she’s such a fan of harness racing. She’s more of a fan, as far as sitting at the races and watching the races than I am,” John said. “The time between races drives me crazy. It doesn’t drive her crazy. She loves to watch races and she understands the game, so anything that I came home with about what was going on, she understood.”

Paula grew up in the Detroit area and her parents owned horses. When her parents divorced, her mother married a trainer.

“I was watching races from the time I was seven or eight years old in the back paddock. We had one horse and if the horse happened to win we’d run all the way across the infield. It’s just something I grew up with,” Paula said.

Her knowledge of the industry — and the sometimes-crazy schedule that comes with it for top catch-drivers — worked particularly well in a relationship in which John and Paula were also in sync about how to raise their three daughters.

“All of that was a big factor in why it’s worked so well for us,” John said. “I was able to thrive in my home life and I think that carried over and was instrumental in a lot of the success I had for so long in my career.”

John said Paula has been great for his mental well-being and excels at helping him decompress after a bad night on the track.

“If you’ve had a bad night or a good night, she understands both so well… Basically, if it’s a good night, we’ll discuss it. And if it’s been a bad night, she just knows to leave it alone and we’ll be talking about something totally different, whether it’s hockey, baseball, the kids or golf… We don’t dwell on it. We talk about something else and it gets you out of that down period when you’re just thinking, ‘What the hell?’”

On a bad night, Paula said she is quick to turn the topic to their grandchildren.

“That always puts a smile on his face,” she said. “Personally, it helps his mind and helps to turn the page.”

Paula Campbell makes one believe every word of that old saying that behind every great man is a great woman.

“I always found that being there, being supportive and being his biggest fan helps him mentally. It doesn’t really help his career, but, mentally, if he’s sound, then he can drive better,” Paula said.

Family as the ultimate priority.

It all started in the most improbable way.

John and Paula were both in relationships with other people when they met in 1976. They only agreed to go out with each other because neither of them wanted to get married.

On that first date — 41 years ago this past May — Paula and John kissed for an eternity in his car.

“We kissed for four hours,” Paula said. “Literally, that’s it. I don’t remember doing that again, but the first night of our first date we kissed for four hours. He had a brand new Cutlass with a gear shift in the middle. From him leaning over and kissing for so long, he actually had a bruise on his leg.”

Five months later, the couple that didn’t want to get married did just that. He was 21. She was 19.

“We were babies,” Paula said. “I think we were so young when we got married, that we kind of grew up with each other. We weren’t set in our ways… We knew nothing, absolutely nothing. We thought we were smart, but we really weren’t. We fell in love and we just got lucky that it worked.”

John said there’s no secret to a successful marriage.

“You don’t get a manual. There’s a lot that goes into it,” he said. “But we both think the same.”

For their 20th anniversary, Paula and John renewed their vows on a cliff overlooking at beach in Hawaii.

In February, the couple renewed their vows a second time — this time in an Elvis chapel in Vegas, when they were in town for the Dan Patch Awards.

“It was all Paula’s idea. I was hesitant about doing it. I thought it was kind of silly,” John said, “but she encouraged me and it was so much fun. Just the two of us were there and they really do a good job with it. We just had the greatest time with it. We renewed our vows in Hawaii for our 20th, but I thought she was nuts when she came up with the Elvis thing.”

Paula said she wanted to do something fun to celebrate their 40th anniversary.

“I was kind of an Elvis groupie because I had seen him nine times. I was only like 15 when I started and I lived out in California with my mom and stepfather and I took a bus to Vegas to see him by myself, got tickets at the hotel. I was kind of a groupie. I just always wanted to get married by Elvis in the Elvis chapel.”

“All three of our daughters got married and none of them wanted my dress, so I took my dress and laid it on my bed and I cut the bottom off and I cut the sleeves off and I wore the same dress I wore 40 years ago,” she said. “John told everyone that night – he told the cab driver, he told the bartender, ‘she’s got the same dress on’. It was tight. It was 40 years ago and I’ve had three kids, but I got it on.

“It was so much fun. We took a cab there and they put our name in lights outside the chapel. There was an Elvis impersonator that walked me down the aisle. He didn’t look like Elvis, because he was way too young, but he sounded like him and he sang as we walked down the aisle. We danced and he incorporated the kids’ names and grandkids’ names into the ceremony. It was just really touching. We went outside and there was a tour bus going by and everyone was waving at us. It was fun, just fun.”

As for a lifetime watching John drive, Paula said she wouldn’t trade it for anything. She has great memories of numerous nights at the Meadowlands.

“Lots of friends and lots of family. I have a lot of memories from the old building,” she said. “My mother lived with us for 20 years and she was my buddy at the races. She’d go up on Friday and Saturday nights. She was a diehard gambler, with some system where she added something and subtracted something. I have no idea what it was, sometimes it worked and sometimes it didn’t. It used to aggravate me that her system wouldn’t always come out to John’s horse. I’d say, ‘I can’t believe you’re sitting here betting against him.’ And she’d say, ‘Well, he’s a minus-four on this race.’”

Tonight, the watching and wagering on John at the Meadowlands will come to an end. Next week, he starts his new job as the president and CEO of the Hambletonian Society. Paula, for one, is happy John is staying in harness racing.

“It’s not over, it’s a new chapter. I think it’s going to be a little more fun, more relaxing and maybe there will be a little more time for a vacation. He actually gets vacation time,” she said. “There will be more time for the grandkids and our daughters. It’s just going to be less stressful and I think it’s a time in our life that it’s going to be nice. Yes, it’s a little bittersweet that he won’t be driving, but he can’t drive forever.”

As much as part of her wishes he could.