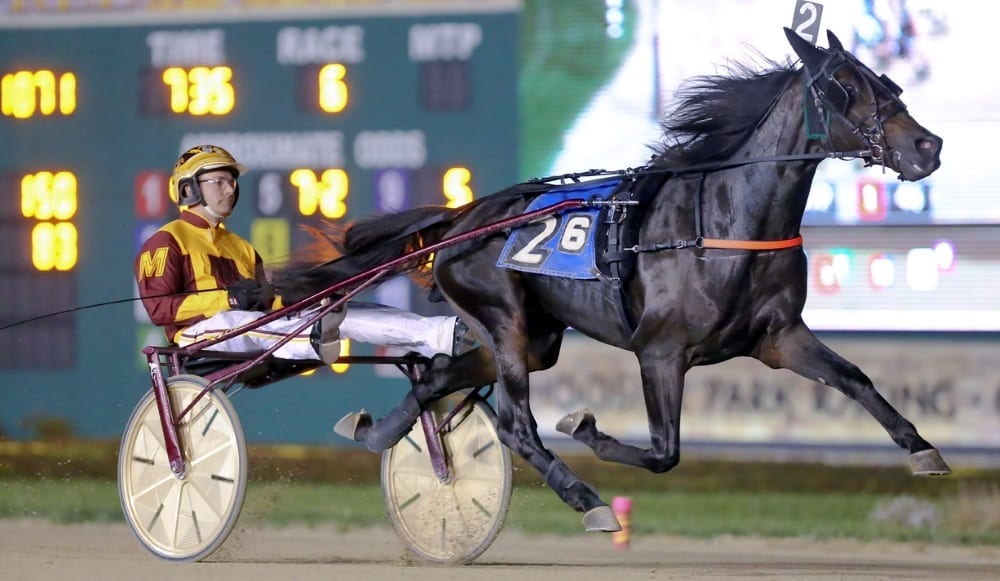 Despite being the last yearling to sell at the 2015 Hoosier Classic sale — and fetching just $8,000 — Jesse V has shed his Mr Irrelevant tag for Frank Baldachino and trainer Mark P’Pool.

Frank Baldachino affectionately refers to sophomore trotter Jesse V as “Mr. Irrelevant.” The son of Jailhouse Jesse has been anything but irrelevant for Baldachino and the rest of the ownership group during his season-plus competing at Hoosier Park Racing & Casino. Although the end of his freshman season and the start of the three-year-old campaign have been marked by struggles, Jesse V looks to be turning things around for trainer Mark P’Pool.

The Mr. Irrelevant moniker was given by Baldachino due to Jesse V’s place in the 2015 Hoosier Classic Sale. The colt, from the Midland Acres consignment, was cataloged as Hip 381 in a sale where 382 yearlings were to be sold. With the last horse in the sale listed as an out, Jesse V was the final baby to pass through the sale ring. Baldachino had talked with P’Pool about buying another yearling around 20 from the end of the sale. When that didn’t work out, the trainer mentioned the Jailhouse Jesse colt.

“Mark was still there and asked me if I was interested in this trotter,” the co-owner said. “I liked the way he looked. I told him that if he could get him cheap enough to buy him.”

In the National Football League, the last player selected each year in the draft is given the title “Mr. Irrelevant.” Baldachino felt the name was fitting for the colt, which they purchased for $8,000. “Usually these horses don’t turn out to be much,” he said.

While expectations may not have been high when the small investment was first made, by the following summer the trotter had proven his relevance in Indiana. As P’Pool trained him down over the winter leading into his 2016 campaign, Jesse V showed he had ability.

“He would beat some of my aged pacers as he was training down,” the trainer said.

Ricky Macomber Jr. was paired with the young trotter when he debuted in late June, racing third in his first taste of competition. Over the course of the summer, the freshman out of the Striking Sahbra mare Louisas Victory hit the board in 11 of 12 trips behind the gate. Jesse V was the most consistent performer in his division, storming to victories in three of five $75,000 Indiana Sires Stakes finals while accumulating $155,000 in earnings for the ownership group of Baldachino, P’Pool, Earl Smith and Northern Lane Farm. Sent off as the favorite in the $216,000 Super Final last October, the colt made a break before the start. That miscue cost him a chance at victory as he finished last.

“I was disappointed with the way he ended his season,” Baldachino said. “But I was extremely happy with his season.”

Although he led all two-year-old trotting colts in sires stakes earnings and wins, Jesse V did not earn divisional honors in Indiana. By rule, the winner of the season-ending super final is crowned divisional champ. P’Pool is disappointed that his charge didn’t get recognition due to his only break in competition coming at the most inopportune time.

“He put a good body of work together,” the conditioner said. “Unfortunately, he wasn’t recognized for it.”

For as consistent as Jesse V was during his freshman campaign, the beginning of the 2017 season was plagued with more breaks at Hoosier Park. After winning two qualifiers with Macomber in the bike, the colt made two breaks in his sophomore debut. He stayed flat the next time out, finishing third. With Macomber’s wife, Jamie, conditioning rival Sir Tucky in Indiana Sires Stakes, John DeLong took the reins in the season’s first elimination. Jesse V again made a break before the start and raced 10th in a field of 11. He would not qualify for the first $75,000 final, but raced in a $15,000 consolation. He broke after the start for DeLong, but salvaged a fifth-place finish to earn his second check of the year.

“After his first start there going out of the gate he got kind of jammed up and made a break. Ricky came off and said I really think we should put trotting hobbles on this horse,” P’Pool said. “I didn’t quite have enough time between there and going right into sires stakes (one week later) to qualify him. We got a little break there (after the first series) and we put the trotting hobbles on him. It seems to have worked. He’s just had a few quirks in behind the gate. It just seems like the hobbles are just enough to keep him trotting and now he’s more manageable.”

With the change in equipment, Jesse V also has a new driver in Peter Wrenn. The veteran reinsman sat behind the trotter for the first time in a winning qualifying effort on June 7. One week later, Wrenn steered the sophomore to a third-place performance in a $10,000 leg of the Ralph and Dorothy Rose Series before capturing the $20,000 final June 14. In victory, Jesse V took control shortly after the quarter and pulled away by nearly five lengths at the wire, stopping the clock in 1:54.1. To put that in perspective, Bluebird Jesse won the first $75,000 final May 31 with a 1:54.4 clocking.
“His confidence level needs to get stronger. I think if he gets his confidence together, I think he’s got a shot to be one of the players,” Wrenn said. “He’s always showed speed. He’s got a lot of talent. He just needs to be able to handle pressure. Time will tell.”
For now, Jesse V appears to be pointed in the right direction. If he can return to the form of 2016, he could prove hard to beat in Indiana Sires Stakes, which continue next week with second round eliminations. The colt may have been an afterthought for many at the sale, but he’s already rewarded his connections handsomely.