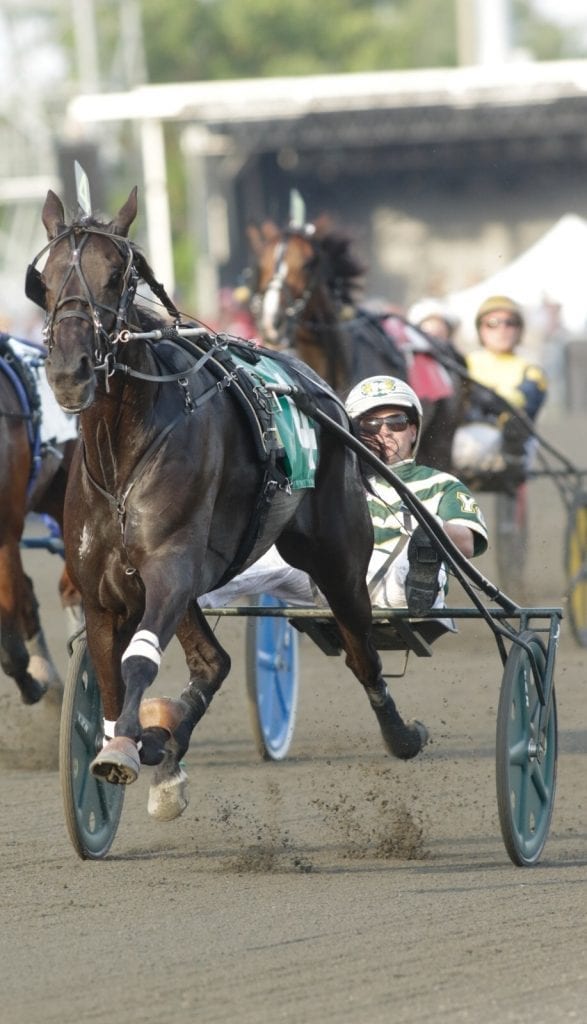 The trotting mare is the first back-to-back winner in the race since Peaceful Way did it in 2005-06.

If there was any question whether the champ still had it, Hannelore Hanover provided an emphatic answer in taking Saturday night’s C$253,000 Armbro Flight final for older trotting mares at Mohawk Racetrack.

It was a performance fit for a consecutive crown, a 3 ¼-length triumph by last year’s Dan Patch and O’Brien honoree as the best older female trotter in the U.S. and Canada.

With the victory, timed in 1:51.4, Hannelore Hanover, trained by Ron Burke, became the first horse to win the Armbro Flight in consecutive years since the great Peaceful Way achieved the feat in 2005-06.

Hannelore Hanover won last year’s race by 6-1/2 lengths over Shake It Cerry. Her 1:51 mark in last year’s Armbro Flight also equaled the world record for a 4-year-old trotting mare and set the standard for the all-age Canadian benchmark for a female trotter.

A half-length defeat in her 2017 seasonal opener at the hooves of Charmed Life was followed by back-to-back wins heading into the Armbro Flight.

“Some people had a thing about her losing her first start, but it was her first race,” said trainer Mickey Burke Jr. “Last year, we came out and went to Miami Valley, we had five starts into her at that point, so it’s racing. They need a start, especially at this level. She got beat by a good horse and since then she’s back to her old self.”

There was no denying that on Saturday evening, despite a delay at the start when one of the starters had to head back to the paddock.

Hannelore Hanover was on the move early, but sitting second, parked through an opening quarter timed in :27, before assuming command and taking the field through a half-mile split in :56.1. After three-quarters in 1:24.1, Gingras and the daughter of Swan For All—High Sobriety widened their advantage with ease down the lane to take all the spoils.

“There was a lot of movement behind the gate, so I just wanted to make my way to the front as easy as I could, but keep her out of trouble,” said Gingras, who teamed with the 5-year-old mare to win the Armbro Flight elimination by 2-3/4 lengths in 1:52.2.

In 2016, Hannelore Hanover reached the winner’s circle on 17 of 20 occasions and bankrolled $1.11 million in purses, leading all female trotters in earnings.

She took the Breeders Crown mare trot and the Hambletonian Maturity, beating her male counterparts. She also got the better of the boys in the Centaur Trotting Classic, while also winning the Armbro Flight Stakes, TVG Series championship for female trotters, Fresh Yankee, Muscle Hill, and Miami Valley Distaff.

“I don’t know what else to say about her, she’s as special as they come,” said Baldachino. “Buying her as a yearling and then Ronnie training and breaking her. Training her down at two and then giving her time off to really mature and settle in to be the type of quality mare she is now, it’s pretty unbelievable. It’s a great feeling, pretty special.”