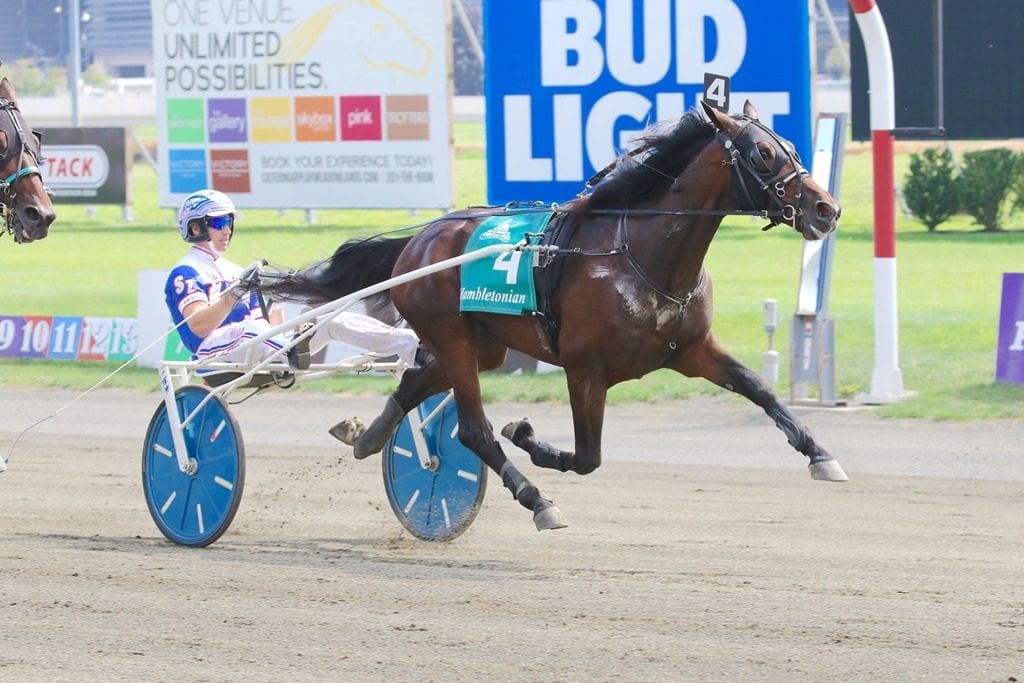 “There are only nine Trotting Triple Crown winners in history, and I can say that I am a man who bred one of them.”

This statement is a source of satisfaction for veteran harness racing entrepreneur William (Bill) Mulligan. It is especially meaningful to him because most of his career his focus has been on the trotting horse, and now he is associated with the best – Marion Marauder, 2016 Trotter of the Year.

But this is not the last act for the 87-year-old Mulligan. Marion Marauder will make his four-year-old pari-mutuel debut Sunday in the Graduate leg at Tioga Downs. This year, he will be facing the top free-for-allers, to start with in North America, and then – who knows – maybe overseas at some point. Bill Mulligan is looking forward to adding to his personal “highlight reel” of harness racing memories – one that goes into its ninth decade this season.

“My dad Eugene always had horses to train,” Mulligan said. “I started assisting him when I was age seven, and by age eight I was driving them myself. I got my first driver’s license for the races in 1947. I’ll always be grateful to two horsemen, for their patience with me and their advocacy with other horsemen that I should be granted a license: Carl Ernst, with whom I was associated for many years, and (Hall of Famer) Levi Harner. They were instrumental in getting me going in the right direction.

“I was looking at going into the harness racing business full time, but I ran into opposition from my mother. She thought that I should get myself an education, go to college. I listened to her, got a degree, then went to work for Ingersoll Rand for 44 years, retiring as executive vice president.”

Bill’s mother was named Marion. Thus was born a farm name (“It’s a shame she passed away just one year before I opened my farm”), and indirectly the name of a Triple Crown champion. (There would be one other “Marion” prominent in this tale; we’ll meet her later.)

Ingersoll Rand is a world-class company in the basic fields of mining and engineering, the inventor of the jackhammer and the producer of the first diesel train locomotive engine. As a rising executive in the company, Mulligan was able to be a racehorse owner. He started a horse on the opening night card at Monticello Raceway in 1959 trained by Carl Ernst and one of his better racehorses was the Valley Victory stallion Party Party, a 1:54.3 winner of almost $200,000 who would later go on to stand at stud at Marion Farms. (Party Party also has the distinction, in his last-save-one career start, to finish ahead of both Magician and Fool’s Goal, and that’s $6.75 million worth of horseflesh right there.)

Mulligan then took the daring move in 1993, at age 63, to resume his sulky career, racing mostly in the Billings Series and other amateur events, although he fondly remembers beating a field of “professional drivers” at Freehold. He got a victory in his first year back with Spring Affair, posted a season’s high of six wins in 2003 and made the Gold Cup of the Billings Series, the championship, and finished fourth in 2005. He retired from driving in ’07, still a “young man” of 77.

In going to the yearling sales in 1999, Mulligan remembers that his trainer, “Bill Popfinger and I had picked out about eight yearlings who were the ones we were going to focus on at the Harrisburg Sale. The first one that was going to sell was named Spellbound Hanover.”

Spellbound Hanover, lucky number 13 in the catalog, was a daughter of Donerail out of a Super Bowl mare named Sounds Swell, a winner of $186,000 in her career. Spellbound was her second foal and first filly.

“Spellbound looked good to both Bill and me, maybe a little on the small side,” Mulligan said, and both were surprised when they were able to land her for $35,000.

Once starting her racetrack career, Spellbound Hanover made an immediate and major impact, winning her first nine starts. Trainer Popfinger guided her in her first two wins, and Cat Manzi had the sulky seat for a NJSS elim and final victory at Garden State for wins eight and nine. John Campbell piloted her in the middle five, which included victories in another NJSS final, the Acorn Stakes, and the Merrie Annabelle final.

Campbell stayed with Spellbound Hanover for the mid-fall Breeders Crown and Goldsmith Maid Stakes. But a new shooter came on the scene: Syrinx Hanover, a daughter of Lindy Lane, who first won her Crown elim and final. In the Goldsmith Maid, it was again Syrinx Hanover over Spellbound Hanover, making it four straight. Spellbound did get back on the winning track at season’s end, winning the elim and final of the Matron Stake.

The awards for two-year-old trotting fillies were split between the two. Spellbound Hanover was voted a Nova Award by Harness Tracks of America’s racing secretaries, while Syrinx Hanover got the nod from the balloting of the U.S. Harness Writers Association.

Mulligan did believe, and still believes, that his filly should have been the undisputed champion of her division. “Syrinx Hanover did not win her (Pennsylvania) Sire Stakes final; Spellbound Hanover won two New Jersey Sire Stakes finals, as well as the Acorn, Merrie Annabelle, and the Matron Stakes. Spellbound had 11 victories to the other filly’s seven, and won more money, $748,346 to $680,191. Spellbound raced well from the beginning of the campaign to the end. It was basically those four weeks of the Breeders Crown and Goldsmith Maid that gave Syrinx a share in the spotlight.”

At three, Spellbound Hanover won her first three starts, including another NJSS final and the Coaching Club Trotting Oaks, the latter on June 27.

Two days later, Syrinx Hanover made her sophomore bow a winning one in an overnight. After the race, John Campbell went over to Mulligan and said, “Bill, I’m sorry, but I won’t be able to drive your filly anymore. I have a new mount.” That filly turned out to be Syrinx Hanover who, in 2001, was undefeated in 12 starts, won a million dollars and was named Trotter of the Year. Spellbound Hanover went off-form, winning only once more again (the Zweig Filly at Syracuse), and giving Mulligan the hope that she would be able to breed on her speed and ability for future generations.

Spellbound Hanover had a good if not spectacular start to her broodmare career. “Of her first eight foals, one died, and three were colts who were sold overseas,” Mulligan said. Of the other four, all fillies, three won over $200,000 on the track: Spellyuptothebar (Malabar Man), Sweetspellofsuccess (Credit Winner), and Fifty Shades (Malabar Man). Among them, they produced a $100,000 winner (UF Lindsey Lou Who) and a 1:54.3 winner (Tommy Bar).

Mulligan retained the next two foals, both mares. So far, a colt or filly out of Spellbound Hanover had not sold at auction for more than $60,000. In contrast, after her own spectacular success at the raceways, Spellbound’s dam Sounds Swell saw four of her next five yearlings sell for $100,000 or more, including a $205,000 Self Possessed colt named Servage Hanover.

In the wake of Marion Marauder’s success in 2016, the story emerged about how trainer Paula Wellwood was at the 2014 Lexington sale and on the phone with her mother, Marion (there’s the other Marion in the tale), who usually goes by her middle name, Jean. The Wellwoods were determining how high to bid. They landed the horse for $37,000, the most for a Spellbound foal since 2005. The fact that the colt was by super racehorse and supersire Muscle Hill – who stood at Marion Farms for the three years he was a Pennsylvania stallion – couldn’t have hurt the price. “But I still thought that was a low price for him. (He was) perhaps a trifle small, but a good-looking individual and good-gaited.”

Marion Marauder is trained by Paula and her husband, Mike Keeling and owned by their son, Devin Keeling and Jean Wellwood.

When told about the daughter-mother conversation during the bidding on Marauder, Mulligan noted, “I hadn’t heard that one, but I must say that (all the) people around Marion Marauder have been very good talking to me about the horse, giving me progress reports and sharing their thrills in the victories.”

One race where there was a delay on the thrill-sharing was the Hambletonian, after which Mulligan, the Wellwoods, the Keelings and driver Scott Zeron had to wait to see if they got the headbob over Southwind Frank.

“That was a long wait, but worth it,” Mulligan said, chuckling.

Marion Marauder didn’t make the Triple Crown easy on any of his connections, winning the other two legs by a head each – which means if you were holding a yardstick, you would be holding a piece of wood longer than the combined three margins of victory for the Triple Crown winning Trotter of the Year.

Mulligan also tied with Spellbound Hanover’s consignor, Hanover Shoe Farms, for the 2016 Pennsylvania Breeder of the Year title — Mulligan, of course, for Marion Marauder and Hanover for Hannelore Hanover.

Marion Marauder recently won two qualifiers at Mohawk and has the rail Sunday in his $50,000 Graduate test at Tioga Downs with regular pilot Scott Zeron in the bike. Of course, everybody connected with the horse, while confident in the qualities of speed and gameness showed last year, goes into the campaign knowing that nothing is guaranteed, but an optimistic attitude is always best.
This last fact may be true most of all for Marion Marauder’s breeder, Bill Mulligan. These days he has to undergo a dialysis treatment of four hours, three times a week. But he is still “dead game,” just like Marauder and Spellbound. He called back a reporter not long after undergoing one such grueling process.

The restorative powers of a person lie not only within the advancements over any physical maladies, but also in the mental status, too – in this case, perhaps best reflected in Winston Churchill’s observation that “The outside of a horse is good for the inside of a man.”

Bill Mulligan is looking forward to the racetrack return of Marion Marauder. With great optimism.