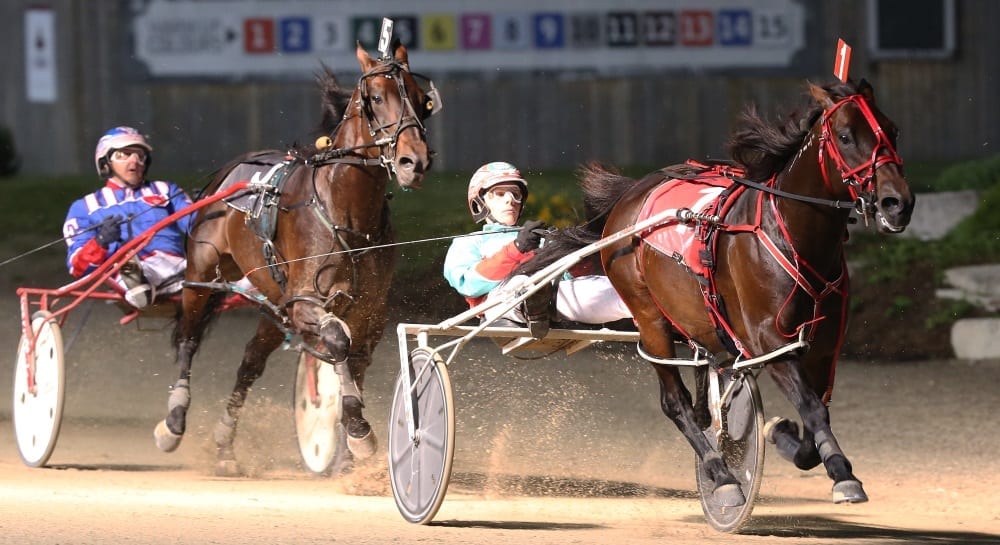 Driver Jordan Stratton and trainer Peter Tritton are batting 1.000 in Canada after teaming up to win the $150,000 Molson Pace Friday night in London, ON with Yonkers regular Bit Of A Legend N.

It was nearly 30 minutes after the $150,000 Molson Pace and Jordan Stratton was still grinning in an emptying paddock Friday at The Raceway at The Western Fair District as the clock pushed toward midnight.

The driver’s first trip to Canada was darn near perfect. Beyond Bit Of A Legend N cruising to a one-and-three-quarter length victory in 1:51.3 in the London, ON track’s premier event, Stratton said he was impressed with everything the Molson had to offer, including a nearly-full grandstand.

“The weather was good, (Bit Of A Legend N) was good and all the stars aligned,” Stratton said. “I don’t really know anybody here by their first name, but it seems like we’ve known each other for years upon years. The hospitality everybody showed me is great. Hopefully, we’ll be back again.”

Bit Of A Legend N’s trainer Peter Tritton, a native of Australia based in Pine Bush, NY, was also making his first trip to race in Canada.

“I haven’t traveled much since I’ve been (in North America), especially going across the line (border) and that. But it’s really half-mile racing for this guy. We haven’t staked him to anything and I said, ‘We better take a shot (at the Molson Pace). He might go to stud at the end of this year, so I thought it would be nice to go up and make an event of it.

“They wanted me to come last year, but I had other horses racing at Chester on Sunday that same weekend and it was too close.”

A little more than a month after Bit Of A Legend N had a rough trip in the $529,000 final of the George Morton Levy Memorial Pacing Series at Yonkers and finished fourth, the eight-year-old son of Bettor’s Delight—Sokys Legend made easy work of a tough Molson Pace field. Drawing the rail was the key, said Tritton.

“I felt a bit sorry for those boys that drew the six and seven. I said, ‘It’s going to be tough on them,’” Tritton said. “I knew I didn’t want to be out there.”

Stratton left from the rail, but last year’s Molson Pace champion, Evenin Of Pleasure, challenged and took the early lead. Before long, Stratton put Bit Of A Legend N in command and stayed on top through fractions of :26.3, :55.4 and 1:23.3. Evenin Of Pleasure and Sylvain Filion held on for the second check, with Sunfire Blue Chip and Mark MacDonald finishing third.

“He’s just a perfect steer,” Tritton said of Bit Of A Legend N. “We have a half-mile track at home. You can work him a mile in 2:00 and you could put him four-wide on the track and he’d just stay there. He wouldn’t go to duck in or out on the straights. He’d just sit there on his own. If you want to go somewhere, you have to pull a line. Otherwise, he’ll just go dead straight.

“He’s such a sound horse, too. He hasn’t got a pimple on him. He’s unbelievable.”

“Whether he’s fit or sore, it doesn’t matter. He gives 110 per cent. When he’s turning for home, it seems like he knows where the wire is at more than me,” Stratton said.