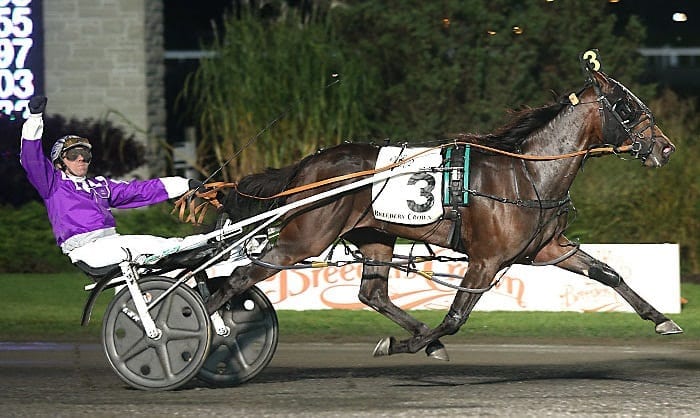 One version of the blueprint to success

Drivers Doug McNair and Brett Miller have taken different paths to the upper echelon of the sport, but will McNair one day follow Miller’s lead?

There is no clear-cut way to get to the top in any business. Harness drivers are no exception. They have to produce to punch their ticket to the big time. What follows is how one name has made the grade and how another might benefit from seeing just how he did it.

One of them is a 27-year-old from Toronto whose star has been rising steadily racing 20 minutes from where he grew up, while the other is a 43-year-old journeyman clearly in his driving prime whose career has skyrocketed due to some good decision making and a little bit of luck.

Maybe youngster Doug McNair will take note of the path that Brett Miller has followed, because it’s very much like the one Dorothy was on before everything went from black and white in Kansas to living color in the Emerald City after the tornado.

When McNair was 10 years old, he dreamed of driving on the Woodbine Entertainment Group (WEG) circuit. “I wanted to be the next Luc Ouellette or Doug Brown,” said McNair. And like a lot of young Ontarians, he also wanted to play center on the first line for the Maple Leafs.

He learned his craft by “watching other guys, what they were doing, that’s how you learn.”

Things came naturally to McNair, who won the Battle of Waterloo at the age of 18 with Trail Boss for his father, trainer Gregg McNair.

Doug was the top driver at the Woodbine meeting that concluded in early April and is currently slugging it out with the new kid, Louis Phillippe Roy, for supremacy atop the standings at Mohawk. He’s close to home and plays golf in the summertime before taking a nap and heading to the track. There’s word that a long-term contract providing security for horsemen is on the horizon.

“Maybe someday I’d relocate,” said McNair. “I’d love to win races like the Meadowlands Pace and Little Brown Jug, but it’s tough to win those races when you drive full time in Canada. You do not get as many chances on top horses. If you look at the numbers, most of the winners of those races are American horses. The trainers would rather use the guys from the States and I don’t blame them.”

But McNair knows others have made the move and succeeded. “Scotty (Zeron) went there. Mark MacDonald went there. Yannick (Gingras) went there. You kind of have to move there. For right now, I’m here, but I’m not saying it’s forever. By the time I’m 30, I’ll think things through, and maybe someday I will go down there. I’d like to make eight or 10 or 12 million (in a year) and win Breeders Crowns and things like that. But it’s not possible to make money like that here.”

Miller experienced success at all of his stops but even he was surprised that all of his work – and travel – would culminate in guiding three of the sport’s top performers a year ago.

He drove regularly at Ohio’s Northfield Park from the mid-1990s until 2008, when he felt he needed a change and wanted to drive more stakes horses.

So, it was off to The Meadows (Pa.). “At that point in my career,” said Miller, “that was a step up. That was in 2008, and I drove there through 2013. It worked out. Dave Palone was always the leading driver, but I was always close. Sometimes, stakes horses would come to The Meadows and I’d get to drive them. But not when the horses went back east.”

Then, in 2014, Miller moved a little closer to where he had to be. “(Trainer) Brewer Adams kept saying to me that I had to come out east, come to Pocono Downs. He kind of talked me into it, so I raced at Pocono and raced his horses. But I realized you have to be further east. You have to be at the Meadowlands to get the real stakes drives, so my wife and I decided to move to New Jersey.”

Anybody can stuff a U-Haul and drive east. One must produce, and Miller certainly did.

Since he first drove at the Big M in 2014, he’s won 281 races, good for fifth best in the deep Meadowlands driver colony.

“I will say in our business a new guy can get very popular just by being new,” Miller said. “It kind of worried me a little bit. I was worried about when the ‘new’ wore off, but it’s been a case of so far, so good.”

He said good fortune played a part in his getting behind Pure Country and Racing Hill, as when they were starting out, they both had higher-profile stablemates, relegating him to drive what were thought to be the next best horses. But Miki was second-best to no horse.

“When Jimmy (Takter) called me and told me I was going to drive Miki, I am not kidding you, I felt like a kid before Christmas. It was so exciting,” said Miller. “On top of that, we had to race that day at The Meadows, then Jimmy, myself, Matt Kakaley and Aaron Merriman, we all got on a little six-seater plane and flew to Scioto. We hit a real bad storm right before we landed. It was one of the scariest flights I’d ever been on. It went from looking like we were going to crash in an airplane to going and driving Always B Miki.”

Miller and Miki then went out and won the Ewart that night in 1:47 over arch-rival Wiggle It Jiggleit, and in the process, equaled a world record. “To win that race after that flight, it was a pretty exciting day,” said Miller, who came up an eyelash short with Racing Hill in the ’16 M Pace.

So, to Doug McNair and all other harness drivers who want big-time success on the big stage. Take note of what Brett Miller did to get where he wanted to go.

The glory lasts forever. But there may be some turbulence along the way.