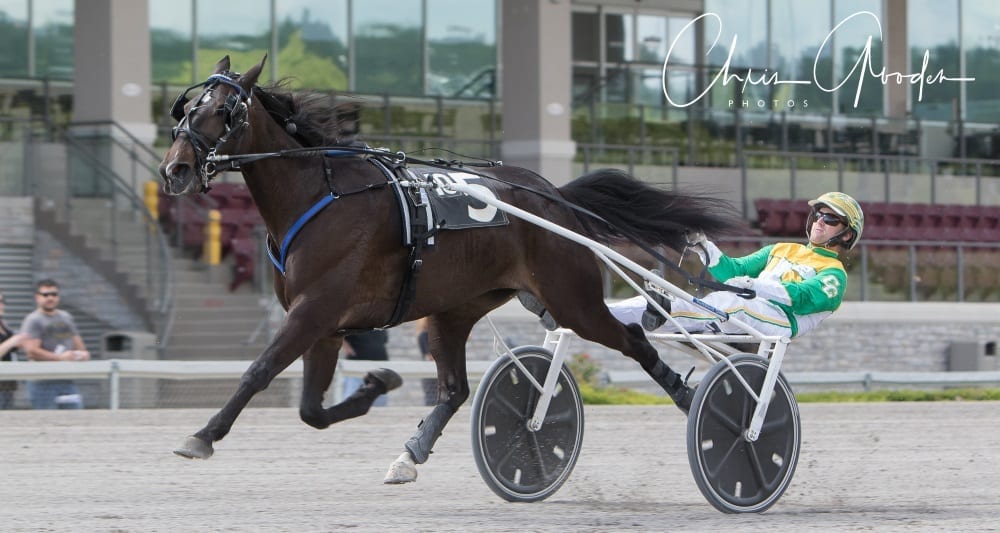 Treviso, Cool Cates and Crann Tara took the other sophomore trotting filly divisions at The Meadows.

by Evan Pattak / The Meadows

Fine Tuned Lady, Pennsylvania’s champion freshman filly trotter, took an important step to successfully defending her title when she scored in a career-best 1:54 — in her season debut — in Saturday’s Pennsylvania Sires Stake (PASS) at The Meadows. The $149,852 event known as the Stenographer was contested over four $37,000 divisions, with Treviso, Cool Cates and Crann Tara taking the other splits.

Fine Tuned Lady hadn’t raced since capturing the Nov. 3 Matron at Dover Downs, but after three qualifiers, the daughter of Cantab Hall—Poster Princess appeared in mid-season form. She sprinted to the lead from post five for Corey Callahan and held off Thats All Moni by three-quarters-of-a-length for owners William Wiswell and M&L Of Delaware, pushing her lifetime bankroll to $457,211. Future Secured completed the ticket.

“She did that on her own,” said Tyler Butenschoen, assistant to winning trainer John Butenschoen. “She was excited and happy to be back. She’s maybe a little bigger, maybe a little more mature. She grew up the way you want to see one grow up.”

Treviso, who banked $155,569 at two, also got her sophomore campaign off to a fine start for trainer/driver Charlie Norris when she grabbed the early lead from post eight and easily downed the pocket-sitting Sianna Hanover by a half-length in 1:54.1. Hot Mess Hanover earned show.

“She really came back good and trained down well,” Norris said. “I only got one qualifier in her, but you can train her about wherever you want to go. She just loves her work.”

Norris rigged the daughter of Muscle Massive—Valbonela with a nasal strip for the first time but didn’t see much benefit from it.

“She breathes hard, although she doesn’t make any noise,” he said. “It’s never affected her performance. I just thought we’d try something new. Any impact? Nah. Chances are she probably won’t wear it again.”

Owners Klis Brothers Stable and Carrie Norris purchased Treviso privately as a yearling after her consignor to the Lexington sale bought her back. Treviso’s next start likely will be in the Currier & Ives at The Meadows.

Cool Cates provided the stake’s tote board pyrotechnics, when, after trailing by five lengths at the three-quarters, she went three wide into the final turn and upset at 31-1. Broadway Idole finished second, three-quarters-of-a-length back, with Vodka N Lindy third.

“She’s got enough speed — her manners aren’t always great,” said Andrew McCarthy, who piloted the daughter of Yankee Glide—Dance To Market for trainer Noel Daley and owner All Laid Out Stable. “She’s a little quieter this year. They have a little more iron in her mouth, so I can hold her a little bit more. She was a little too hot as a 2-year-old. She’s starting to figure it out. If she keeps behaving herself, I think she’ll go places.”