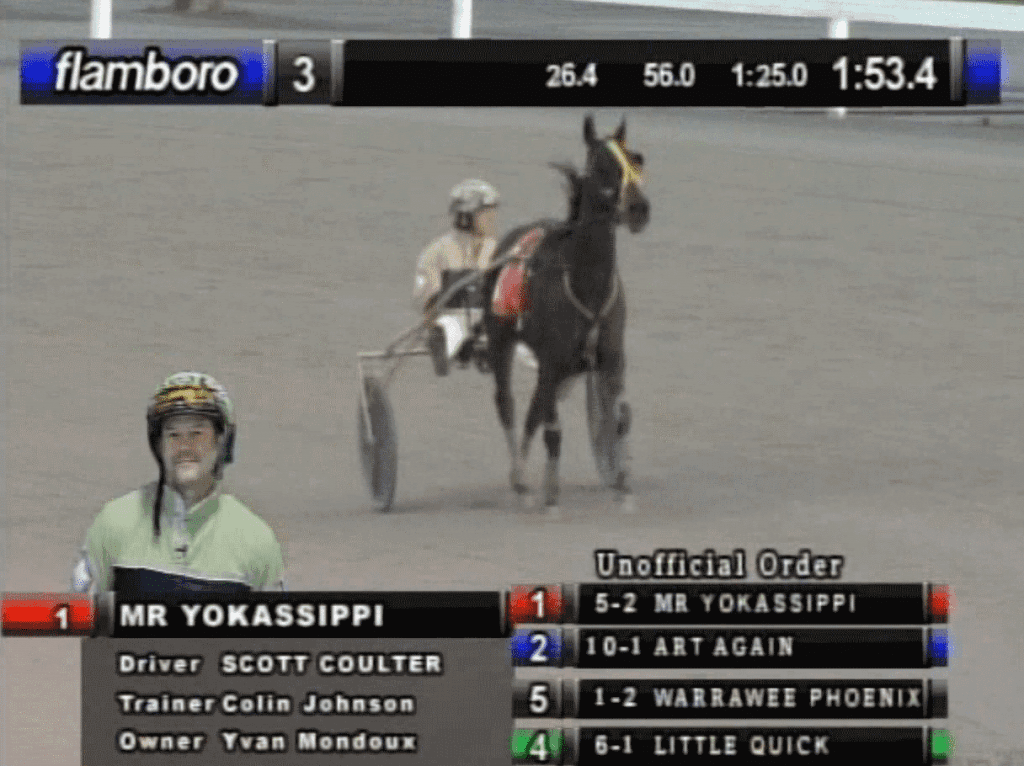 It was 8-year-old pacing gelding Mr Yokassippi that had the crowd at Flamboro Downs and a few people on social media buzzing last night, with his lifetime-best score in race three.

The modestly-bred LH Stryker gelding out of the Wannamaker mare Township Sharky – the lone winner from the dam from two foals that raced – was making his first start off a Colin Johnson claim, having been taken from a winning effort in a $6,500 conditioned claimer from trainer Amy Macdonald’s barn five days earlier.

Mr Yokassippi certainly knows where the winner’s circle is, having won 20 of 72 races prior to the claim last Sunday. Despite stepping up in class and moving up from the $6,500 conditioned claimer level to a $8,500 claiming handicap, he was taking plenty of action as the 5-2 second choice. Driver Scott Coulter had designs on racing near the front, but he wisely took back at the start when it appeared a three-pronged battle might materialize soon after the start.

Leader Art Again carved out a serious opening quarter of :26.4 with Mr. Yokassippi biding his time in third. Following a :56 half, the eventual winner made his move first up while the 1-2 favorite Warrawee Pheonix gapped his cover.

With a powerful brush passing the three-quarters in 1:25, Mr Yokassippi easily put away a game but overmatched Art Again and in pacing a :28.4 kicker, the 8-year-old beat his previous lifetime-best mark by one-and-four-fifths seconds. That mark was taken at The Raceway at Western Fair in London in November of 2015 during his 6-year old campaign.

Mr Yokassippi’s 1:53.4 clocking was the fastest time of the evening’s card by nearly three seconds, a performance that certainly made the veteran buzzworthy.