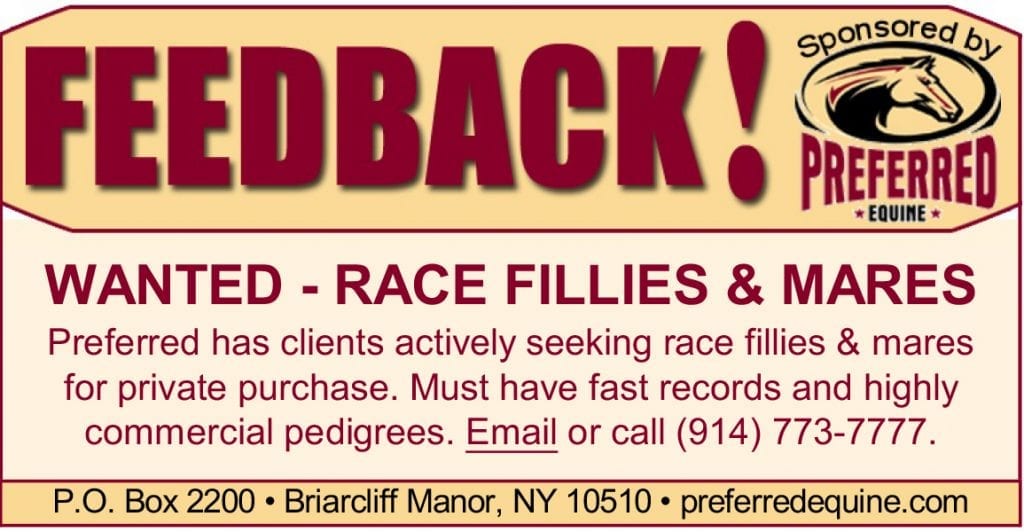 Kudos to Gural on Buzzy

I have to preface my comments about Brickman by admitting that I got heavily burned at windows due to his victory. Brickman took down all my Pick-4 tickets of which I would have won had he not uncorked the mile of his life. That being said, I’m glad Mr. Gural acted as did by banning trainer Buzzy Sholty’s entries. The race by Brickman was simply vomitous. He swept the entire field three-wide on the turn going around dead cover into a rated pace. Someone tell me how many other times has that happened at the Meadowlands, especially after they opened the new building? As it was mentioned, he also lowered his lifetime mark by three seconds. However, there was one more fact that was overlooked. Brickman went off as one of the favorites at 3-1. He was 20-1 in the morning line in a seven-horse field. Granted, he picked up a superior driver in David Miller, but still there must have been a bevy of people who knew how live Brickman was. Also, the horse was previously trained by Ed Hart. Hart is not a bum trainer, although he doesn’t have the stable he once had. This was a trainer who conditioned numerous top-notch horses. I would love to hear a response from Sholty about the horse’s marked improvement. Did he switch feed, start him on new vitamins, put on glue on shoes, transfuse his blood with Somebeachsomewhere….? (see Sholty’s response on page 6)

As for the horse shortage, it’s really prevalent this week at the Meadowlands. Mr. Gural can’t do anything more and I don’t mean to kick the horse when it’s down, but the Saturday night card may be the worse Meadowlands card I’ve seen in my life. This card would have been rough on an old Meadowlands Wednesday program. He’s also right that he’s going to get destroyed handle wise. The sad part is that the other tracks running against the Meadowlands still combined won’t out-handle a Meadowlands “low.”

Unfortunately, I don’t think anyone will work together to help Mr. Gural improve the situation. In fact, Joe Faraldo is probably sitting in the barren Yonkers grandstand, with the normal 30 people who still attend the races live, putting pins in a Gural voodoo doll while laughing. Nothing is funnier than seeing Yonkers put up the pool totals recently, which barely equal the purse of the race. Unfortunately, I think the only solution for the Meadowlands is for a meet that runs from December to March and then another that runs July through Hambletonian Day. Otherwise, racing April, May and June is practically suicide. Case-in-point, tonight’s card.

Why is racing still in the dumps? Well, compared to golf and The Masters, they have corporate money and status. Racing has gone backwards. Harness racing needs to be more mainstreamed.

I suggested in New Jersey that they scrap their existing lottery to have a horse racing-lottery once a week. The number pads would be associated with seven or eight races that would achieve 100 numbers, 1 to 100. You could show this live on a local NJ station or TVG.

Racing should try to stop the bad press and try to make the drivers and trainers more well known. No one knows any of the trainers in harness racing but, they all know the Bob Bafferts of the world.

The harness Triple Crown needs to be set in stone and more prominent each year so, you know when to find it. Does it have a set pattern? Of course not.

Tracks need to tap into something besides racinos. The handle at most harness tracks is a joke. If you could find a way to increase handle, then how about a bonus for that race if the handle is over a certain amount.

The problem is the people in racing are ex-racing or friends of the track and have no clue about doing this.

The handle at Pocono is a joke. Look at the weekly pools. Why bet this track when the bettor does not get paid their fare share of the pot when they hit a real longshot?

Also, tell the tracks to get rid of 10, 20 and 50 cent wagers. They are killing the pools. You cheapen the wager and only attract nickel and dime aging slot players. The only track that I have seen that has decent payouts is Ladbroke who try wagering initiatives plus they actually go in the casino encouraging people to play the horses.

All in all, racing is not going up but, down. Does anyone notice?

I stop betting awhile ago because TVG hates harness racing. They never have my harness tracks on TV or live video stream. They seem to focus on QH, top thoroughbred tracks or the Derby Trail. Honestly, they are almost as annoying as CNN or MSNBC or Bill Mahrer.

They also keep personalities that are anti-fan or either too stupid to evaluate a harness race or any type of race unless it has a top jockey or top trainer. What a joke.

RE: Ross and wrestling

I had to comment back on Steve Ross’s Feedback letter 4/9. (full story here). Basically, his point was if Wrestlemania can attract 100,000 fans to a fake sport, then integrity and takeout are not the issues that keep people from attending harness racing.

If anyone believes that then this sport is doomed.

They are there for you entertainment dollar. You get what you pay for.

Las Vegas attracts millions of visitors. What would happen to “attendance” if slot machines paid at a rate of 25 per cent instead of 98 per cent of the time? If any number on the roulette table can be hit with a switch of the button? A dealer can pull any card off the deck anytime they wanted?

Millions would turn into hundreds (some I guess might find that fun).

Harness racing is entertaining, but its existence relies from gambling dollars. Nobody, unless you have rocks in your head, thinks racing can make it without betting. And as long as there is betting, there better be integrity and a fair percentage needs to be returned to the bettor or you will be hearing crickets on race night.

In today’s world of high tech, why can’t Yonkers have their video on the finish line? I constantly hear murmuring around me about “my horse won by a head, but they changed the photo!” A newbie, especially a younger person well-versed in today’s technology, doesn’t understand the bias of camera placement. They leave feeling they were cheated! Many, probably, will never return, as well as, tell the story to their friends. With all of the casino money, I’m sure this travesty can be ameliorated.

Here is something I just can’t figure out: This Saturday, April 8, 2017 the following are the figures for handle and purses at Yonkers and the Meadowlands.

This can’t be right. Better purses = better horses but does not = better handle? The Meadowlands runs cheap horses, cheap purses and gets 4.325 times the handle of Yonkers. Yonkers races at least five days and the Meadowlands two.

Can someone explain this to me? If this is the World of Slots then Harness Racing in this world can’t exist for very long. Can any business survive with these figures? How can you own and race horses for such cheap purses? The other side is how can an operation be run paying out 81.88% of what it handles?