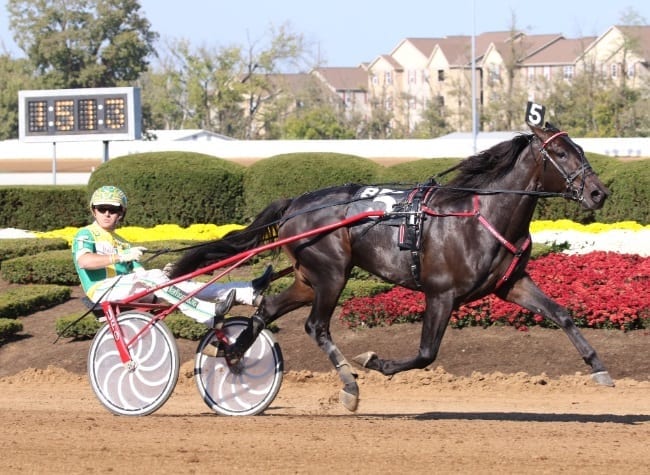 Trainer Linda Toscano is trying to keep karma on her side as she quietly preps Walner for his all-important sophomore campaign with trainers Ron Burke and Jimmy Takter nipping at her heels.

If you’re looking for someone certain her horse is going to win the Hambletonian, don’t bother contacting Linda Toscano.

“I will not go there,” said the trainer of Walner, the top three-year-old colt trotter in training. “I made the mistake of doing that with Chapter Seven. A great horse, but karma got in the way. He got sick. We tried to play catch up but did not win the Hambletonian.”

Karma smiled upon Toscano a year later, as her Market Share won the 2012 edition of harness racing’s trotting classic. It may smile upon her yet again with Walner, who was a dominant force during his two-year-old campaign a year ago.

He started only eight times, but won seven after starting his season late, the result of not being staked to many of the two-year-old events. He earned 83 per cent of his division-best $484,037 by taking the Breeders Crown and Kindergarten in his last two starts.

The son of Chapter Seven—Random Destiny compiled some impressive numbers a year ago: Of his five wins on a mile track, the smallest winning margin was three lengths. He was sent off at odds of 4-5 or lower in every one of his starts. On five occasions, he was 1-5 or shorter. His lone loss came in a Kindergarten preliminary after going off stride. He came back one week later and crushed his foes by six-and-a-half lengths.

On Aug. 2 of last year, Walner broke stride racing in the New York Sire Stakes at Saratoga, but came back to win after spotting the field 20 lengths. “That’s when I knew I had a special horse,” said Toscano, who then got some help from a friend. “George Ducharme, one of my favorite people, walked over to me after the race. George has had trotters for years (he won the 2013 Hambletonian with Royalty For Life),” said Toscano. “He handed me a package of Tums and said, ‘You’re going to need these more than I am.’

“He’s pretty much in everything (all of the major stakes) and will make his first start in the Empire Breeders Classic in early June,” said Toscano, who did admit “It’s a good kind of pressure” when it comes to the expectations for her horse.

Walner is clearly the division leader as the year begins, but the usual suspects have a handful of horses who could be right there.

Ron Burke knows a thing or two about expectations. His Southwind Frank was all the rage during the early part of the 2016 stakes season, but came up just short in the Hambletonian, missing a fast-closing nose to Marion Marauder.

The trainer’s approach to the 2017 season is a four-pronged one.

Snowstorm Hanover won the Valley Victory and Matron during a year that saw the Muscle Massive—Snow Angel Hanover product win six of 14 starts.

“He’s a very consistent horse,” said Burke. “The more I raced him, the better he got. (For the upcoming season) we changed the bit on him a little, we want to get his head down a little more.”

Until Walner’s late-season heroics, Burke’s What The Hill was the early Hambletonian favorite after taking the Peter Haughton.

“I think What The Hill is the better horse (when compared to Snowstorm Hanover),” said Burke. “I have a horse, Southwind Woody, that can trot with any of them. He made breaks all last year, but hasn’t made any this year. Southwind Cobra actually trained down the best of all four.”

“He’s a great horse,” said Burke of Walner. “At the end of the year last year, I had one horse who could go with him, What The Hill. David (Miller) was ripping his face off trying to find room late in the Breeders Crown. Walner is the (Southwind) Frank of this year. It’s hard for everything to go perfect. We’ll see. I’m not conceding any races to anybody.”

He trains Rubio, King On The Hill and Victor Gio It, and all are on course for the upcoming season.

“All three are doing well,” said Takter, the six-time United States Harness Writers Association Trainer of the Year. “I’m very pleased with them. They are all staked to all of the majors. It’s too early to say which is best. All three are different. Gio is very, very fast while the other two are handy.

“Walner, he’s a big horse and big horses normally develop from two to three,” said Takter of the early Hambletonian favorite. “He’ll be tough, but there could be 25 horses that are big players (in the division). Without Walner, I think it’s a wide-open game.”

One horse you won’t see at the Hambletonian is Mass Production, and trainer Rick Zeron wishes he could turn back time and send out some checks.

“He was a great colt last year,” said Zeron. “But in March, when I had to make stakes payments, he was not training that well. He had a bit of an attitude problem, so I did not make the Hambletonian payment. It’s a great regret that I have.”

Zeron recalled how his colt benefitted in a big way from a month break before winning the Ontario Sire Stakes (OSS) Gold in 1:55.3. Only 12 days later, he would win the OSS Super Final in 1:54.4 by eight-and-three-quarter lengths as the 1-2 favorite. “I put him on the lead down the backstretch after getting away fifth and could have gone a lot more with him if I wanted to,” said Zeron.

Mass Production will qualify in the last week of May and still has plenty of stakes, such as the Goodtimes, Canadian Trotting Classic and Matron, on his schedule. “I have him down to race 14 times this year,” said Zeron, who is looking down the road with his prized pupil. “I want to keep racing him as a four-year-old, five-year-old and six-year-old. I’d love to race in the Hambletonian Maturity next year.”

Zeron spoke with his son, Scott — who guided Marion Marauder to the Hambletonian winner’s circle a year ago — about Walner, whom Scott saw recently in North Carolina. “My son said to me, ‘Good Lord, this horse is a creature!’”

Good news for Linda Toscano. Maybe not so much for the rest of the division.