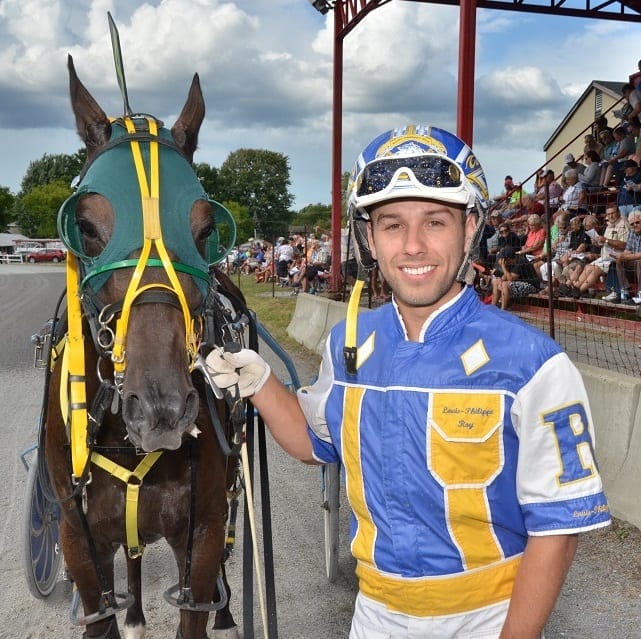 Louis-Philippe Roy in Canada and Drew Monti in the U.S. are two 20-something drivers making an impact on the continent’s top circuits.

Things haven’t gone exactly as planned in 2017 for driver Louis-Philippe Roy, and so far, that’s been a good thing.

Instead of trying to make a name for himself in the U.S., the 27-year-old native of tiny Mont-Joli, Quebec, has already done it on Canada’s premier harness-racing circuit, sitting second to Doug McNair in the win column at Woodbine two months into the year.

Even Roy is surprised how smoothly and quickly he’s made the transition from the small tracks of eastern Ontario and Quebec, less than three years after his first professional win at Hippodrome 3R in Trois-Rivieres, QC in August of 2014. He’d begun his journey on Quebec’s fair tracks at age 18, winning his first race in the village of Pabos in just his second start (after being disqualified from first in his debut for interference on the last turn). Growing up, his racing idol is someone few people outside Quebec have ever heard of — Pascal Berube — a longtime leading driver at Quebec City’s now-defunct Hippodrome de Quebec, who also hailed from Mont-Joli.

“So far, the move to southern Ontario has been way beyond my expectations. What helped me was having a trainer like Rene Allard provide me with good stock right away,” said Roy. ‘‘In a way, it was actually harder for me to break in at Hippodrome 3R (in 2014). There were a lot of éstablished veteran drivers from Montreal there and it was difficult for a young unknown to get drives.”

Eventually, he got them, and by the fall of 2016 he was leading driver at both Hippodrome 3R in Quebec and Rideau-Carleton Raceway in Ottawa, earning an O’Brien Award as Canada’s ‘future star” on the strength of his 237-win, $1.1-million season.

He could have dominated those tracks for years to come, but Roy already had other plans.

With the encouragement of Allard, he decided to take his shot south of the border, a move that had already paid big dividends for fellow Quebecers Michel Lachance, Daniel Dube and Yannick Gingras.

The catalyst was his August victory in the 2016 Gold Cup & Saucer, Prince Edward Island’s showcase race.

“I started going to that race about five years ago, as a spectator,” said Roy. “The island is about a six-hour drive from Mont-Joli.”

Roy had met Allard — another Quebecer who advanced his career with a U.S. move — during Gold Cup & Saucer festivities five years ago, but they were still just acquaintances. He’d never driven a horse for Allard.

Two days before the entry box closed for the 2016 race, Roy got a call from Allard asking if he was going to Charlottetown again, and if so, would he be interested in driving one of his entrants?

“How could I say no? I’d been going to this race as a fan. I know how big a deal it is there.”

“Before the elimination, Rene told me to get out in front of Foiled Again, if I could, That would improve our chances.”

Roy gunned YS Lotus to an early lead he never relinquished. But in the $60,000 final the next week, they sat back off a hot early pace, then wore down Allard’s favored entry, Go Daddy Go, and cleared off by six lengths in a track-record time of 1:50.1.

“It was special because my parents were there, my girlfriend was there, my brother and sister were there. And I had about 30 minutes to enjoy it before jumping into a car for the 10-hour drive to Hippodrome 3R for the Prix ‘D’Été the next afternoon.” (He finished last behind Rockin Ron with longshot Asap Hanover).

The Gold Cup & Saucer victory convinced Roy he wanted more than small purses and overnight races and persuaded Allard that Roy had the stuff to make it state-side. Allard even recommended a lawyer to help Roy with the paperwork.

But it has proved more complicated than expected, and six months later, Roy is still waiting for clearance. He hasn’t completely abandoned his American dream, but for now at least, it’s on hold.

That’s because Allard decided to race more horses on the Woodbine Entertainment Group circuit, and asked Roy if he wanted to drive them.

“He called me on a Sunday night after the Rideau races. It took me about three seconds to say yes,” said Roy, though it meant saying goodbye to Quebec and to Telus, the Canadian télécommunications company that had employed him as a financial analyst since he graduated from the University of Quebec at Rimouski.

For the first two years of his driving career, he juggled both jobs, “but it was time to choose, and I chose my passion. I love the excitement of racing, the strategy of it, the calculations you have to make… all of it, really. To be able to make a living from it just makes it that much better.”

Allard calls Roy ‘‘a natural,” which is why he made the relative newcomer the number-one driver for his 44-horse Ontario string this winter.

“He’s calm, intelligent and humble, all things that will help him. He adjusts easily to different horses and you never have to tell him twice how a certain horse is. He retains what you said, I’ve been watching him for a few years now and he just keeps learning and getting better. He reminds me of Scott Zeron that way. He can be one of the top ones,” Allard said.

From the start, Roy made his presence felt at Woodbine with Allard’s horses, notably scoring a runner-up finish behind Lady Shadow with Yagonnakissmeornot in the $311,000 Milton Stakes at Mohawk.

Other trainers took notice of his good hands and calm demeanour and quickly filled his dance card. Longtime WEG leader Richard Moreau was one of his early boosters, and now is his landlord as well.

While he felt like an outsider at first on the WEG circuit, Roy said he never sensed resentment and considers himself part of the driving fraternity now. If there are any hard feelings toward the newly-arrived catch-driving sensation, his rivals will have a chance to get their shots in at the annual horsemen’s hockey tournament in Ontario next month. Roy — all five-foot-eight and 145 pounds of him — will be in the tournament for the first time, playing the same position as during his junior-hockey days: goalie.

In a brief four-year driving career racing predominantly in western New York, 22-year-old Drew Monti has accomplished quite a bit. While attending college full time over the same period, Monti was able to establish himself as one of the best drivers on that circuit while earning a bachelor’s degree in business and finance.

At the conclusion of the 2016 Batavia Downs summer-fall meet, Monti claimed his first driving title. This was the highlight of a year that also saw him win his first New York Sire Stake, set career bests for earnings ($1.2 million) and UDR (.275), and register 220 wins overall.

When the Christmas break hit and a void in the local racing calendar was at hand, Monti decided it was time to expand his horizons and try to take his game to another level. And the move he decided to make was to the Meadowlands.

With urging and support from family and friends, Monti spoke with the Big M’s CEO and general manager Jason Settlemoir to express his desire to compete there for the winter. Settlemoir added his endorsement to the already strong backing and told him he would be a welcomed addition to their driver colony.

Monti’s first start was the weekend of Christmas and the experience was one he will long remember.

“It was definitely eye opening because of what it was. Not intimidating, but hey, this was the big leagues,” said Monti. “Everybody there was great from day one. It took a couple weeks to earn my spot with the drivers, but after winning some races, everybody was unbelievably cool and as welcoming as you could want them to be.

“The atmosphere at the Meadowlands is a lot different than what I am used to; there is a noticeable level of professionalism there. There is no fighting or arguing among the drivers; everybody just comes in, does their job and tries to win. It was very easy to get along with everybody there.”

Monti pointed out it took a couple weeks to get accustomed to driving on a mile track after years on a half. Making a small mistake early in the race may have cost him money at the end. But by the second or third week, he had gotten a rhythm and it kind of fell into place.

“In the beginning I was fortunate to get solid drives coming in as the new guy. I knew some trainers racing there (like Rick Dane Jr. and Jodi Riedel) who used me right away and then other people put me up on their horses,” Monti said. “Plus the judges were very helpful using me in races where drivers were needed. And after I started winning a few races, more trainers put me up because they had a reason now.”

After four years of racing half-milers, the mile track experience was very fulfilling for Monti, and lining up next to some of the best drivers in the business every night helped him to improve his game.

“I absolutely loved racing on the big track. Every night, driving with superior drivers improves your skills. It’s not like I gained any more talent from being there, but I think I became more polished by watching those other guys and how they did it. You get better, if you can, because you have to,” said Monti.

“The last four weeks were really great because I had developed some good friendships with Vinnie (Ginsburg), Joe (Bongiorno) and Marcus (Miller). We would stop out for a bite and hang before and after the races. I still talk to those guys a couple times a week since I’ve left and look forward to competing against them again very soon.”

After nine weeks on the road, the commute from western New York to New Jersey began to take a toll on Monti’s “other job” commitments and he had to make a choice.

Although he has his degree, Monti needs to gain three state licenses in order to work full time as a financial advisor. So the time required to study and take the tests meant staying home for now and taking care of those requirements.

His run at the Meadowlands was relatively short, but Monti made it known he was there. He registered two driving triples, blew up the tote board with a 54-1 shot (Abbijade Hanover, $110), won his fastest race ever (Somesizesomestyle 1:50.3) and drove his horses into check-getting positions about 50 per cent of the time.

In 163 starts, Monti had 18 wins, 22 seconds and 18 thirds for a total of just under $200,000 in purses. And even though he has been gone since February 18, he still ranks as the sixth leading driver at the current Meadowlands meet.

“The time I spent down there was fun. I learned a lot and I want to thank everyone who supported me for the opportunity to be successful. If I can get back to the Meadowlands before the winter meet, I will certainly go. But if I have a shot at another title at home I will try to win it and then head back down in December, ” Monti said.